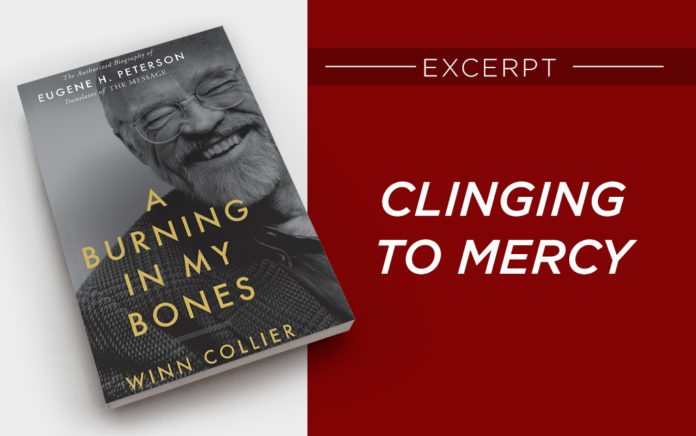 Excerpted from ‘A Burning in My Bones’ (WaterBrook)

Excerpted From
A Burning in My Bones
by Winn Collier

The number of pastors who sought out Eugene Peterson (through letters, visits, and sometimes even crafting entire sabbaticals around his schedule) was staggering. Eugene loved pastors, and he contended that being a faithful pastor within the American consumeristic society required immense grace—and at least a little belligerence. What most pastors need more than anything else, Eugene wrote in one letter, is not encouragement but discernment. Most of what parishioners would consider encouragement is just encouragement to do the wrong thing, the things that make them feel good.

Alarmed by the beguiling assumptions undergirding most church leadership trends, Eugene cautioned pastors that true ministry typically requires a pastor to operate from the margins. This is modest work. This is not glamorous work, this is behind-the-scenes, ignored, patient servant work. Forget about being relevant, about being effective. Friends, you are living in exile—get used to it … The less people notice you the better.

When one pastor asked Eugene how he arrived at his church’s vision statement, he likely didn’t expect the answer he received: If something like “vision” crept in, I got rid of it as fast as I could. The church I wanted or dreamt of or had a vision for got in the way of the church I had, the church God gave me. No, I’m afraid that I don’t have much truck with the “vision statements” that seem to fuel the ambition of pastors these days.

Pastors like Daniel Grothe found their way to Eugene. Daniel moved his family to Colorado Springs to serve at New Life Church, the 14,000-member church founded by Ted Haggard. Within Daniel’s first three years, the church first endured a national scandal and then a gunman loaded with multiple firearms and 1,000 rounds of ammunition stepped onto the church campus, killing two young women before committing suicide inside New Life’s building. Beleaguered, Daniel scoured the used-book table at Goodwill, sighting The Contemplative Pastor for 99 cents. “I’d never heard of it, but I saw Eugene’s name on the spine and thought, I think that’s the guy who translated The Message.” Daniel devoured the book and sent a letter to Eugene, asking if he could visit for a day, but assuming he’d never hear back. A few weeks later, a letter arrived from Lakeside, Montana.

Dear Daniel,
Yes, I would be willing to spend a day with you here in Montana. But not so fast. I think it would be better if you spent some time thinking about what is involved. Why don’t you take some time to reflect on what “pastor” exactly means to you. And what “church” means to you. Write a couple of pages on each, pastor and church and send them to me.

Daniel wrote the papers, and Eugene liked what he read. Daniel visited Eugene multiple times. Eugene’s relationship with Daniel complicates the (easily arrived at) notion that Eugene dismissed all megachurches. He was skeptical, to put it mildly, of the obsession with size and the inevitable limitations to intimacy that come with vast organizations. However, there were always exceptions to the rule, he would say. “It’s not impossible to be a true pastor at a large church. It’s just very, very hard.”

One exasperated pastor asked Eugene how to get his church to understand liturgy and the sacramental life, how to get them to pray, for crying out loud. Eugene offered a gentle reply: Don’t spend your time trying to get your congregation to live the truths or the way you want them to do. Instead, you just live this way, with them. It doesn’t work very well to impose anything on a congregation. Eugene resonated with one literary critic’s line regarding Thoreau’s Walden: You cannot rush Walden into people’s heart—gesture and hint. Though Sabbath was a cornerstone for Eugene, remarkably he never once preached on Sabbath at Christ Our King. He simply practiced Sabbath, revealing the grace-drenched rhythm in his everyday affairs. Eugene wrote several pastoral letters describing what his Sabbath looked like. And then he simply Sabbathed.

“As a pastor, how do you slip through the opposition and make your point?” Eugene asked.

You do it by being lazy—or what looks like lazy—sitting in your study for half a day reading a book that doesn’t have anything to do with your sermon. … My father was a butcher. When he delivered meat to restaurants, he would sit at the counter, have a cup of coffee and piece of pie, and waste time. But that time was critical for building relationships. … Sometimes I’m with pastors who don’t wander around. They don’t waste time. Their time is too valuable. … To be unbusy, you have to be disengaged from egos—both yours and others—and start dealing with souls. Souls cannot be hurried.

Eugene scorned self-important hero-leaders who acted as if God handed them tablets of stone atop a blazing mountain. To be a pastor, he believed, means one must live with fear and trembling, to cling to hope in God even as she reckons with her own unsteady soul. To be a pastor requires immense humility and self-awareness, clinging to mercy like a drowning man grasps for a buoy. The strongest sign of authenticity in what you and I are doing is the inadequacy we feel most of the time.

Excerpted from A Burning in My Bones: The Authorized Biography of Eugene H. Peterson, Translator of The Message © 2021 by Winn Collier. Published by WaterBrook, an imprint of Random House, a division of Penguin Random House LLC.