Home Resources Books A Radical Call to Surrender and Serve 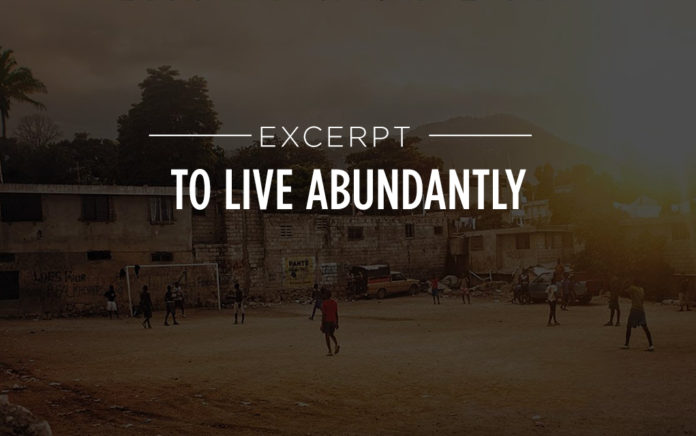 How and why I followed God’s call to Haiti.

Excerpted From
Live Beyond
By David Vanderpool

After the earthquake in Haiti and our subsequent trips to provide aid there, my wife and I continued to see both our futures tethered to this work. During the three years between the earthquake and our move, we served in other places—Africa, the Middle East, Central America—also impoverished and desperately in need. But something about the people of Haiti had captured both our hearts.

Laurie first went to Haiti in March 2010, about two months after the earthquake. When she saw the devastation in Haiti, unlike what we had seen anywhere else in the world, she became acutely aware of the fact that these were the United States’ neighbors—our neighbors—and it was our job to care for them. She also saw that there was a veil of Christianity in Haiti but that the country operated under voodoo. She felt the need of evangelism heavy on her heart.

But Laurie knew something was special about Haiti even before the earthquake took us there. In late 2009, months before the earthquake hit in January 2010, Laurie was praying to the Lord about where MMDR should serve next. Our work on the clinic we built in Honduras was finishing up, and we didn’t feel that Honduras was exactly where the Lord wanted us in the long term. During her prayers, she felt that the Lord told her that we were supposed to work in Haiti. Neither of us had ever been to Haiti or even knew anyone who had been to Haiti. She felt that it was out of the blue, so she told me about it and continued to contemplate the idea until I left for disaster relief following the earthquake. Then she knew the confirmation of what the Lord told her.

The things that she witnessed on her first trip to Haiti affirmed in her that the Lord guided our steps to this country for a reason. She jumped headfirst into the work. She did all the prep for the teams in terms of coordinating flights, loading supplies and keeping teams organized when we made it to Haiti. For several months, a large bank in Alabama generously donated the use of their corporate jets to send medical personnel and supplies to Haiti. Laurie would load up the trucks and drive them to Birmingham to fill the flights. Laurie and I worked and dreamed and prayed together about a future in Haiti.

Many nights we got down on our knees to pray. We asked God about his plans for our future. We wanted to know what he wanted us to do with all his blessings. We wanted to know how we might answer his call. We wanted to know if we could live in his lifestyle. We both knew that such a prayer was audacious, even dangerous. We were volunteering to give up control.

While we had many supporters, a lot of people were telling us we were nuts because we had a great medical practice and a great lifestyle. Who would want to throw that away? Among them were people we admire and respect, so it wasn’t easy for Laurie and me to make a decision against their advice. It was nerve-racking, especially for me, to step outside the status quo on a different path. I’m the kind of guy who wants to know exactly how things play out. So as I contemplated selling our farm, our house, our cars, dissolving my medical practice and leaving all the things we’d spent a lifetime gathering, I couldn’t help but wonder if I was making the right choice as the head of the family. Selfishly, I wondered if I would miss certain things like my guitar collection. (I can tell you now that I don’t.)

But I knew that my life didn’t look like Jesus’s life, and that convicted me. His Spirit prompted me to want to make sweeping changes in order to become like him. Answering his call to serve in Thomazeau, Haiti, and choosing to live beyond the status quo to join Jesus in relieving the pain of the oppressed has not been easy. It’s been, by far, the hardest, most challenging, and most back-breaking job I’ve ever known. Yet this choice has brought me tangible joy, genuine peace, fulfilling pleasure … abundant life.

This radical call of Jesus is for every Christian.

From Outreach Magazine  Following a Dangerous (But Good) God

This call to follow our Leader in his lifestyle is his invitation to all of his believers. His example is to leave our old lifestyle behind in order to become like him. He didn’t exclude anyone when he commanded his followers to “go.” He wants us to be leavers. Believers should be leavers. The first step of being like Jesus is to leave. Just as he left heaven, we leave our old ways, our old habits, our old pursuits and even our homes and families.

One of my favorite passages describing Jesus is 2 Corinthians 8:9: “For you know the grace of our Lord Jesus Christ, that though he was rich, yet for your sake, he became poor so that you by his poverty you might become rich.”

Here I see how Jesus made the choice to live beyond his wealth, his power, his prestige, his position, and his family (everything that made him rich) … in order to allow us to live and live abundantly.

But, for most of my life, I had chosen to live comfortably. I had chosen to enjoy wealth, to appreciate prestige, to take pleasure in my position, and to relish the affection of my family.

I graduated from a Christian university. I attended church three times a week. I had daily Bible studies. I loved being a reputable doctor in the United States. I loved having an income that allowed me to take our family on vacations—and to do disaster relief work—wherever we wanted. I loved having disposable wealth to spend on myself so that I could fly airplanes and purchase fancy guitars and take my family to the best restaurants and have community respect. But Jesus didn’t have or want any of that. It finally dawned on me that if my Lord, the Almighty Creator of the universe, could leave his riches and live among the poor in order to bring them life, then surely I could follow him by leaving my home in America and do the same.

How to Go the Distance in Ministry

Will Mancini: Designing the Life That God Dreamed for You

How Failure Changed Me Forever