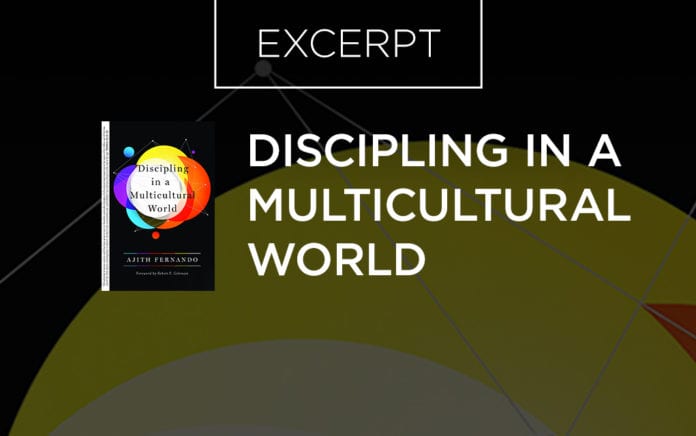 Christians are called to actively engage our communities. Here are ways we can do that.

Excerpted From
Discipling in a Multicultural World
By Ajith Fernando

The year 2004 saw widespread attacks on Christians and churches in Sri Lanka, especially in places where people had converted to Christianity from other faiths. As Christian leaders discussed this issue, one concern that surfaced was that people disengaged unnecessarily from their communities when they became Christians. A pastor told me that when people became Christians, they immediately became bad neighbors. Earlier they participated in community activities. But once they became involved in Christian activities, going to church most days of the week, they didn’t have time for the community. Numerous false stories were being spread about Christians, and because the people had minimal contact with Christians, they had no way to correct the false impressions made by those reports.

This social disengagement contradicts the call for Christians to be “the salt of the earth” and “the light of the world” (Matt. 5:13–14). Indeed, we reject a lot of what we see in the world; but we cannot bear effective witness for Christ unless we are engaged with the communities in which we live. The call of Christ is for Christians (1) to be holy by living according to the Word of God, (2) to not conform to the sin of the world and (3) to go into the world as God’s agents. Jesus presents these three emphases in his great high priestly prayer:

We must encourage our disciplees to develop healthy relationships with people in the communities around them. This requires wisdom and sensitivity, because it was with the non-Christian society that many sinned before their conversion to Christ. Immediately after the man from the country of the Gerasenes was delivered, Jesus told him, “Go home to your friends and tell them how much the Lord has done for you, and how he has had mercy on you” (Mark 5:19). Perhaps we would not say the same thing to a former alcoholic about his friends in the bar. In Jesus’s high priestly prayer, before saying that he was sending the disciples into the world, he said that he “guarded them” (John 17:12). But because he was going back to the Father, it was time for them to go into the world without the protection of his physical presence with them. We too must be sensitive to the need to protect our people, but sooner or later they must go into the wider community. Of course, the Holy Spirit, whom Jesus called “the Helper,” provides his immediate and constant presence, making it advantageous for Jesus’ disciples that he has left them (John 16:7).

The members of the communities in which Christians live should recognize Christians as friendly, faithful and helpful neighbors who are committed to the welfare of the community. Once they sense that Christians are part of them, then Christianity can take on a legitimacy in their community. It is usually after this recognition that persecution subsides. But in many unreached areas it may take the church’s people as much as 5 to 10 years of patient involvement before they are considered legitimate entities in a community. Christians must not lose heart in this effort to identify with their surroundings.

Here are some distinct ways in which Christians can be involved in their communities:

1. We need to get involved in community-run projects as fellow citizens. To overtly share the gospel at such times may be a breach of etiquette. There will be other opportunities for that. After the Indian Ocean tsunami of 2004, our ministry was involved in helping schools get back to normalcy. We worked very hard, but we had to abide by the condition placed upon us that we would not preach the gospel. However, it was very clear to the people that what we did came out of our Christian commitments, and doors of receptivity to the gospel were opened.

2. When Christians do social projects, they can inform local authorities and seek their advice and help in deciding who might benefit from the projects and how they should be done.

3. We can make our facilities (like a church hall) available for social events in the community, so long as those events do not contradict Christian principles. In Youth for Christ centers, we provide sports facilities for youth and playgrounds with things like swings, seesaws, and mat slides for children in the neighborhood. These have been appreciated by the communities, though it is a challenge to ensure that the facilities are used responsibly.

4. We should encourage our children to be involved in voluntary service projects and sports and musical events during festivals such as a New Year festival. Adults and youth might take part in organizing and implementing these projects and events.

5. We might seek membership in community groups, such as funeral aid committees, school committees, and committees for the protection of peace and security in the neighborhood.

6. Christians who are celebrities in sports and other forms of entertainment, or leaders in politics and government, can exemplify how Christians are genuine members in their communities.

7. Sometimes Christianity is associated with things that have no necessary connection with the gospel. For example, some people today associate Christianity with the United States. They may presume Christians believe that the United States is superior to all other countries. That could result in resentment by those considered inferior, and become an obstacle to gospel witness. We should distinguish Christianity from the agenda of any country or culture. Christianity stands above all nations and cultures, and challenges every nation to conform to the values of the Creator of the world.

8. Christians can actively participate in public dialogues on television, radio, or the Internet on issues facing the nation, such as sexuality and marriage, corruption, drug addiction and racism. They can use such forums while agreeing to the limitations imposed for involvement (such as no overt evangelism). The Christian gospel has clear and very relevant answers to the problems facing the world today. Christians can present these answers with great effectiveness without using Christian jargon.

Disciplees must live out their Christianity in their families and in the wider world to which they belong. Disciplers must help them to meaningfully engage with the contexts in which they live.

Excerpted from Discipling in a Multicultural World by Ajith Fernando, ©2019. Used by permission of Crossway, a publishing ministry of Good News Publishers, Wheaton, IL 60187, Crossway.org.