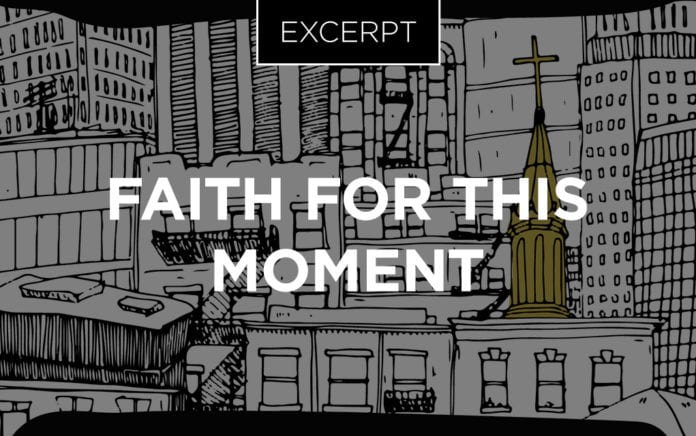 For Christians in a post-Christian culture, the question is how we relate to the culture.

Excerpted From
Faith for This Moment
By Rick McKinley

Richard Mouw illustrates how, in our attempts to legislate Christian values, we subtly quit trusting in Jesus and begin to trust political powers that we hope will secure our values:

“The criticisms of the Constantinian arrangement are legitimate. When the church allies itself too closely with political power it loses the freedom to be the kind of church that God wants it to be. The late Lesslie Newbigin, who served for many years during the twentieth century as a missionary in India, made this case very effectively. When Newbigin returned to the British Isles after his retirement, he was shocked by the major cultural changes that had taken place there as well as on the European continent and in North America. When he began his career, he saw himself as being sent out from a Christian culture—where Christianity was ‘the established religion’—to a mission field. But now he realized that his own homeland had become a mission field. Christians in the West, Newbigin observed, could no longer take a dominant Christian influence for granted. We are now, he said, ‘post-Christendom.’ But that is not a thing to be regretted, he quickly added; the church should always see itself as ‘missional.’ The Christendom arrangement lured the church into a sense of ‘owning’ the culture that kept it from full faithfulness to the gospel.” —Abraham Kuyper: A Short and Personal Introduction (Eerdmans, 2011)

If the answer to what it means to be the people of God now is not to baptize Babylon and it is not to burn Babylon to the ground in hopes that we can reconstruct a new and better Christendom, then what alternatives do we have at our disposal?

What we will discover is that Israel in exile gives us great insight into living in this new world. As we are about to see, the way in which the people of God navigated their faithfulness to God in exile was not to burn Babylon or to baptize Babylon but to find distinct ways in which to bless and resist Babylon. In the process, they discovered ways to be faithful in the given moment in which they found themselves. They teach us how we might find a way forward for ourselves as we follow an ancient path into this volatile new world.

There are several lessons to be learned from those who were faithful to God in exile. By looking into how they navigated these tricky waters, we discover that in exile we must learn to live faithfully to God without the power and privilege of holding a majority position in society or in the world. Exile reveals to us that our hope is in another kingdom, with the currency of love, where we are all one in Christ and the weapons of our warfare are prayer and sacrifice in the name of Jesus.

The faithful in Babylon also show us that in exile we must learn to be faithful in our presence and prophetic in our witness, while participating in the world through practices that create an alternative narrative of what it means to be the people of God in public spaces and in personal callings.

The prophets of that time proclaimed loud and clear that history is not under the control of other gods, nor can its mysteries be discovered by human manipulation. History is under the control of the God who is utterly free to direct it and to reveal it as he pleases (Rev. 5:9). According to his sovereign pleasure, he will intervene among the kingdoms of this world and establish a universal kingdom that will endure forever.

From Outreach Magazine  Honor Those With Whom You Disagree

The God of Israel in exile is the God of the church in twenty-first-century America. And this is the God who is still free to direct the course of history and reveal himself to his people and to the world as he pleases.

Excerpted from Faith for This Moment by Rick McKinley. Baker Books, a division of Baker Publishing Group. Copyright 2018. Used by permission. BakerPublishingGroup.com