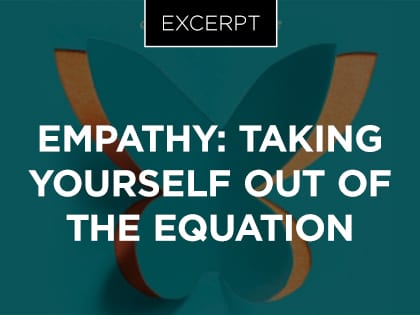 Developing empathy for those who hurt or offend us is a powerful step toward forgiveness and freedom.

Excerpted From
Forgive Your Way to Freedom
By Gil Mertz

Sympathy and empathy are kissing cousins, but they are still different. Sympathy is a feeling of care and understanding for the suffering of others. Empathy is the experience of understanding another person’s condition from that person’s perspective, as though we’ve stepped into their skin and vantage point. For our purposes, when forgiving, it will help if we can consider empathizing with the person who hurt us so we can understand why this person did what they did to us.

Working to gain empathy is not for your perpetrator’s benefit. It’s for yours. As you are working through the forgiveness process, you might find it helpful to consider what kind of broken person would do such an evil thing. How did this person get so messed up that they could hurt you like that?

A young man I worked with really struggled to forgive his mother who was an alcoholic all during his childhood. His father left her when this man was very young, and to cope, his mother turned to liquor. Her drunken binges caused her to lose jobs, which kept them dependent on government assistance. They were in and out of different homes, she had a long string of abusive boyfriends, and she was a constant source of embarrassment to him. All of that fed his rage.

But as he and I worked together in counseling, he was eventually able to look past his own pain and consider what life must have been like for his mother. Imagining life through her eyes helped him forgive her. She was raised by an alcoholic father, she was abandoned by her husband, and completely stressed out with this little boy to raise alone. The more he could grasp her misery, the more it helped ease his own misery. As he was able to empathize with his mother’s condition and what drove her behavior, it helped him remember the past in a different way.

Our best example of empathy is when Jesus was being led to the cross. He didn’t think of how unfair it was that he was being blamed for the sins of the world. He did not seek to retaliate against those who were beating him, spitting on him, mocking him and cheering his death. Instead, Jesus looked at the crazed mob and simply prayed, “Father, forgive them, for they do not know what they are doing” (Luke 23:34). It was a magnificent prayer of empathy.

From Outreach Magazine  Talking With God: Stepping Out Beyond Our Inadequacy

A great exercise that can help you build empathy toward your offender is to role-play with a trusted friend. Your friend will play you while you play the role of the person you’re trying to forgive. As your friend questions you about what happened, try to give an answer from your offender’s perspective.

You are not trying to justify anyone’s actions, but you will come to appreciate this new perspective to bring you closure. If you seek to understand the brokenness inside your offender, that may have motivated certain behavior, it can help you forgive and remember the past differently. This will also help you find the freedom you need.

A powerful illustration of forgiveness through empathy started on the night of July 20, 2012. An excited crowd gathered to watch a midnight showing of the Batman movie The Dark Knight Rises in Aurora, Colorado. Just minutes after the movie started, James Holmes walked into a crowded theater, tossed in a smoke canister, and opened fire with a rifle, a shotgun and two handguns. When the massacre ended, twelve people were murdered and fifty-eight were left wounded.

One of those fifty-eight was Pierce O’Farrill, who suffered three bullet wounds to his right arm and left foot. He also had shrapnel lodged in his chest. From his hospital bed, Pierce, an active member of The Edge Church in Aurora, near where the shooting took place, was already feeling empathy for the shooter and was ready to extend forgiveness.

“This is going to be hard for people to understand, but I feel sorry for him,” Pierce said. “When I think what that soul must be like to have that much hatred and that much anger in his heart—what every day must be like. I can’t imagine getting out of bed every morning and having that much anger and hatred for people that he undoubtedly has. I’m not angry at him. I’ll pray for him.”

When Pierce was released a few days later from the University of Colorado Hospital, he told reporters, “Of course, I forgive him with all my heart. When I saw him in his hearing, I felt nothing but sorrow for him—he’s just a lost soul right now. I want to see him sometime. The first thing I want to say to him is ‘I forgive you,’ and the next is, ‘Can I pray for you?’”

Though James Holmes once stood over Pierce O’Farrill’s body and shot him three times, intending to murder him in cold blood, Pierce survived and forgave his way to freedom. He later shared in an interview with the Aurora Sentinel, “Forgiveness is really more for the victim than the attacker. Forgiveness sets you free. I’m blessed to not know that anger and that hatred in my heart.”

Excerpted from Forgive Your Way to Freedom: Reconcile Your Past and Reclaim Your Future by Gil Mertz (©2018). Published by Moody Publishers. Used by permission.