Home Resources Books How Should We Respond to Globalization? 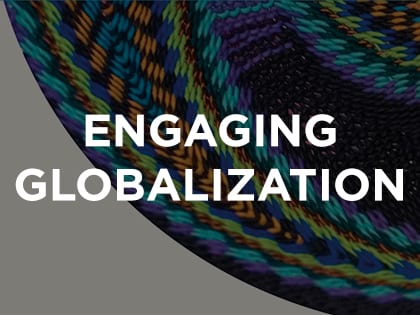 The world is changing fast. Are we being mindful about whether the world is looking more like God intended?

We live in interesting times.

In the last twenty years, things have been changing with increasing speed in God’s world. Economically, the world’s gross domestic product (GDP) more than doubled to almost $78 trillion in spite of a number of recessions in major economies and the global recession of 2008–9. Twenty years ago, the world’s largest economies in terms of comparative purchasing power were the United States, Japan and Germany; today they are China, the United States and India. In the last twenty years, global trade increased from $2 trillion to over $18 trillion a year.

This has brought some good news to the poor. The proportion of the world’s population living in extreme poverty has been cut in half over this twenty-year period. Deaths of women giving birth have been reduced by almost half, as have deaths of children under the age of five. In developing countries, life expectancy increased by almost nine years. More children are in school, and the greatest increase is among girls.

Technologically, the first website was launched in 1991, and seventeen years later Google indexed one trillion websites. Internet users reached three billion in 2015. In the last twenty years, we have witnessed the launch of Google, Facebook, YouTube, Twitter and a host of new social media. The iPhone was launched in 2007, and four years later 1 billion people were using smart phones around the world and 4.6 billion people were using mobile phones. These and more technological innovations are available to this generation of adolescents and youth, which is the largest in history and represents almost one-third of the world’s population. These young people will have little memory of a world without smart phones, instant messaging and the internet.

Since the beginning of time, people, plants and animals have been going global. But it is only in the last two hundred years that going global was turbocharged by the ability of people to get connected and get closer to each other. As we will see later in more detail, the modern era of globalization began with the economic development of Britain in the beginning of the nineteenth century, followed by Europe, the United States and Japan. This new form of globalization began sweeping the world after World War II and especially with the end of the Cold War in the late 1980s. The drivers of globalization are deep and continuing changes in economics, technology, culture and human self-understanding.

But there is more to globalization than just getting closer and better connected. It is changing us as individuals, not just our societies. We are meeting people previously too distant to know. Not so long ago, our neighbor usually looked like us or spoke our language; now our neighbor can be a Sudanese mother with a hungry child, or a Syrian girl fleeing the destruction of her home country. Their images and stories are readily available on our digital devices, and we are responding compassionately to these stories.

Yet there is a sense that we are letting globalization and its processes flow over us, unaware that we are being pulled into a new world. I am concerned that we as Christians are not asking the question “Are we and is the world becoming what God intends?” When we see the growth in global compassion, the answer is “maybe.” When we see the materialism, the patterns of consumption and the increase in the abuse of the weak and the environment, the answer is far less clear. These are theological questions for God’s people. This leads me to my main point.

With the exception of some within the Christian academy who think we need to resist globalization, the larger Christian community seems to be ignoring globalization or fearing it. When was the last time you heard a sermon series, a Bible or book study or a retreat topic focused on a Christian understanding and response to globalization? How many churches or denominations have globalization as a focus of their discipleship and mission strategy? I have been teaching a course on this topic at Fuller Theological Seminary for almost ten years, and every year I experience the surprise of students when they begin to engage—“We’ve had our heads down; there is so much about this we did not know. This has not been on our radar.” While Christians seem to be willing to use the technological tools of globalization for church and mission, there is little evidence that Christians and their churches are devoting much energy to understanding globalization, biblically assessing its values and promises to us and preparing our people to respond.

I suspect there are three broad reasons for this. First, globalization as a topic seems too big and complicated, too involved with economics, technology and politics. This is technical stuff best left to experts, and maybe it’s a bit worldly for our taste. Second, we Christians have been socialized into quietly accepting our relegation to the private realm of spiritual things, leaving the world of economics, politics and technology to the West’s materialist and secular humanism. We no longer seem to believe that we are to be signs of the coming kingdom of God and that God has made us partners in God’s plan to redeem and restore creation. Third, in the aftermath of the passing of Christendom, we have lost our nerve a bit. We are not sure that we are worthy of a place at the public table when it comes to assessing and engaging the globalization of economics, finance, technology and the like. We are not sure that we will be welcome and, worse, that we have anything of value to offer. We seem to have forgotten that the gospel is true and secular humanism is not.