Home Resources Books Refugees and the Globalization of Indifference 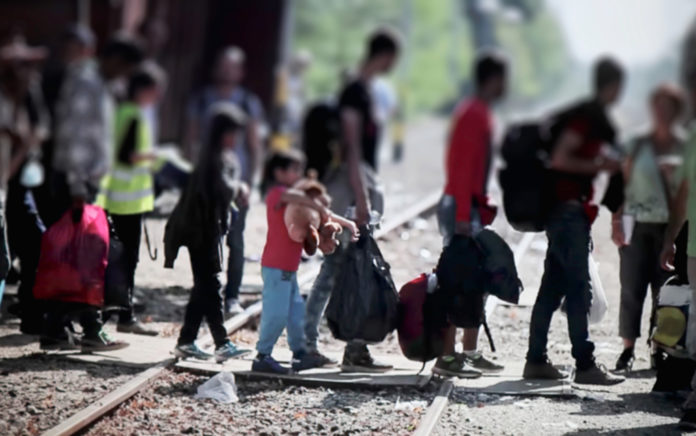 There are some hopeful signs that some countries are ready to reimagine how they engage with vulnerable immigrants and refugees. In the U.S., President Joe Biden has announced a new refugee intake ceiling of 125,000 per year. Yet, it is important for Christians to keep these hopeful signs in both biblical perspective and also in […]

There are some hopeful signs that some countries are ready to reimagine how they engage with vulnerable immigrants and refugees. In the U.S., President Joe Biden has announced a new refugee intake ceiling of 125,000 per year. Yet, it is important for Christians to keep these hopeful signs in both biblical perspective and also in global perspective.

In July 2013, Pope Francis visited refugees and other migrants from North Africa who had recently arrived on the island of Lampedusa, the southernmost part of Italy, seeking a home in Europe. Here he prayed for the many who had drowned attempting the same journey. In his homily, he lamented what he described as “the globalization of indifference” toward our brother and sister migrants, our kin. Just as God asked Cain, “‘Where is your brother?’,” Francis observed, “the question has to be asked today, ‘Who is responsible for the blood of these brothers and sisters of ours?’ We reply, ‘It isn’t I; I don’t have anything to do with it; it must be someone else, but it is certainly not I.’”

This globalized indifference has only worsened in the years since Francis spoke these words. In 2013, the United Nations’ refugee agency, UNHCR, reported that 51.2 million people were forcibly displaced by persecution, conflict or generalized violence. By mid-2020, the number had risen to 80 million. 15.7 million refugees have been displaced for more than five years. But, diverted by populist nationalisms and international antagonisms, we increasingly refuse responsibility for our vulnerable brothers and sisters. As the number of forcibly displaced people rises year by year, the number of people being welcomed and resettled by countries has begun to decline at an alarming rate—from 189,300 in 2016 to 107,800 in 2019—and efforts to secure global commitment to a broad program of action to address the crisis of displacement have been rejected by some countries as incompatible with their “sovereign interests.” This is a crisis of kinship.

In our new book, Refuge Reimagined: Biblical Kinship in Global Politics, we highlight the biblical mandate for a thick form of kinship with the displaced, a kinship that embraces and enfolds vulnerable strangers into church communities and national communities, a deeply relational kinship.

From Outreach Magazine  Loneliness in America

A biblical ethic of kinship is unfolded throughout the biblical story. We see it, for example, in the so-called golden rule, Jesus’ command: “You shall love the Lord your God … and your neighbor as yourself” (Mark 12:30; Matt. 22:37–39; cf. Luke 10:27). The “love” language found in the Gospels here derives from kinship language. “Love” means to enfold and protect another person as one would a family member. It means to live in solidarity with someone who needs it, as makeshift family.

Of course, Jesus didn’t invent this command. Rather Jesus is interpreting the Old Testament law as fulfilled in his own life and ministry, as he gathered a faithful remnant, an eschatological Israel. With these words, Jesus is echoing the Pentateuch’s teaching on those to whom kinship love is due under the covenant. Kinship-love is due to God (Deut. 6:5), to one’s neighbor (that is, one’s kinsperson; see Lev. 19:18), and also to the stranger (the outsider who is to be enfolded as kin; see Lev. 19:34; Deut. 10:18). These three kinship-loves are interdependent, the expression of an organic covenant life that is emphatically oriented toward others and in particular toward the weakest among us.

Jesus’ Parable of the Good Samaritan amplifies the ethic found in the golden rule (Luke 10:25–37). The parable obliterates the boundary markers between those who should and those who should not receive our love, compassion, and service. Jesus’ response to the self-righteous lawyer undermines the question itself: “Who is my neighbor?” Neighbors are defined not by self-serving social maps but in our response to their need.

A biblical ethic of kinship—what a beautiful vision for responding to vulnerable immigrants and refugees we find in the Scriptures! And yet, as Pope France said on the island of Lampedusa, “The culture of comfort, which makes us think only of ourselves, makes us insensitive to the cries of other people, makes us live in soap bubbles which, however lovely, are insubstantial; they offer a fleeting and empty illusion that results in indifference to others; indeed, it even leads to the globalization of indifference.”

Is it not the church’s role to burst open these self-seeking bubbles of isolation? Are we not the body of Christ, those indwelled by the Spirit to live as a sign and a foretaste of Christ’s tender reign? Our book tells stories of remarkable initiatives of welcome and support, offered in the name of Christ for newcomers, places such as Kinbrace Community Society in Vancouver, Canada. Yet, the church must also advocate for a kinship with people-on-the-move that extends beyond itself. A comprehensive response to forced displacement requires that individual countries work together, cooperating and collaborating, sharing responsibilities and opportunities, to ensure that those who are displaced internally within their home countries or seeking temporary asylum in other countries are given protection and assistance, that those who wish to return to their home countries and towns after a period of displacement are able to do so with safety and dignity, and that those who seek permanent resettlement in other countries are able to secure it within a reasonable period of time and without further trauma.

Reflecting on the 1994 Rwandan genocide, UN Secretary-General Kofi Annan once spoke of the need for the international community to move “from dehumanization and toward a stronger sense of global kinship.” Only with such a notion of “global kinship” can we begin to build a comprehensive global response to the present crisis.

Gendered language aside, Martin Luther King Jr. put it well in his powerful 1967 speech against the Vietnam War at Riverside Church: “I share with all men the calling to be a son of the living God. Beyond the calling of race or nation or creed is this vocation of sonship and brotherhood. . . . We are called to speak for the weak, for the voiceless, for the victims of our nation, for those it calls ‘enemy,’ for no document from human hands can make these humans any less our brothers.”

The COVID pandemic has shed light on our common humanity, our kinship. Every community across the globe has been impacted. The sadness a person might feel in the loss of a loved one in, say, California is shared with another in, say, Bamako, Mali. Can we lean into the global kinship we have experienced? Can we offer welcome and home and community to our displaced brothers and sisters?