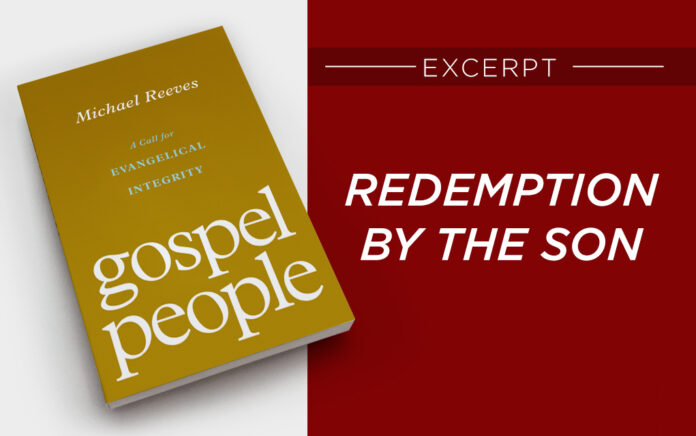 Evangelicals look to Scripture to know Christ, and there they find the unique Son of God.

Redemption by the Son

The evangel of God is news “concerning his Son” (Rom. 1:3), which is why the apostle Paul decided to know nothing among the Corinthians “except Jesus Christ and him crucified” (1 Cor. 2:2). To be faithful to the gospel means treating Christ and his redeeming death and resurrection as matters “of first importance” (1 Cor. 15:3–4). “The heartbeat of the gospel message,” writes Conrad Mbewe, “is Christ’s life, death, burial, and resurrection on our behalf. Once we lose this message, we have lost the means by which God will add to his church on earth real citizens of his kingdom.”

None of which may sound very surprising. Isn’t such Christ-centeredness mere Christianity? Indeed it is, and yet through the centuries, Christians have kept managing to downgrade Jesus, cast him in their own image, or use him as the icing to sell some other agenda. It was said, for example, of the liberal theologian Adolf von Harnack that the “Christ that Harnack sees, looking back through nineteen centuries of Catholic darkness, is only the reflection of a Liberal Protestant face, seen at the bottom of a deep well.”

That is not the evangelical way. Evangelicals look to Scripture to know Christ, and there they find the unique Son of God, exclusive in his glorious identity and completely sufficient as a savior. Thus, wrote J. C. Ryle, another

leading feature of Evangelical Religion is the paramount importance it attaches to the work and office of our Lord Jesus Christ, and to the nature of the salvation which He has wrought out for man. Its theory is that the eternal Son of God, Jesus Christ, has by His life, death, and resurrection, as our Representative and Substitute, obtained a complete salvation for sinners, and a redemption from the guilt, power, and consequences of sin, and that all who believe on Him are, even while they live, completely forgiven and justified from all things, are reckoned completely righteous before God, are interested in Christ and all His benefits.

The Exclusive Identity of Christ

The Gospel of John opens like a parting of the clouds with the most glorious possible assertion of the unique identity of Christ:

All things were made through him, and without him was not any thing made that was made. In him was life, and the life was the light of men. (John 1:1–4)

The one who would take flesh (v. 14) was the Word spoken out by the Father in his work of creation in Genesis 1. He is the expression of the Father through whom all things were created. He himself is not created: before things were made through him, he was with God and he was God. This Word of God is the one who belongs in the deepest, most essential closeness and oneness with God, and the one who displays the innermost reality of God’s being. He is, as Hebrews 1:3 phrases it, “the radiance of the glory of God and the exact imprint of his nature.” As such, “life” is not something to which he merely points the way, like some human prophet. He is the living one. He is life, and life is to be found “in him” (v. 4).

These truths about the Son of God are so vital they were the subject of what was perhaps the greatest battle the church fought in the centuries after the New Testament. As the words of the Nicene Creed show, Christians saw that the gospel depends upon Jesus Christ being “God from God, light from light, true God from true God, begotten not made, of one being with the Father.” It means that there is no God in heaven who is unlike Jesus. And it means that he is, exclusively, the way, and the truth, and the life. No one can come to the Father except through him (John 14:6).

It is that eternal title of Christ’s, “the Word of God,” that John focuses on in the first few verses of his gospel. From verse 12, however, his emphasis shifts to another eternal title. In verse 12, it is only really a hint, as he writes of how “to all who did receive him, who believed in his name, he gave the right to become children of God.” But what sort of being could give that blessing of adoption? Only one who is “the only Son from the Father, full of grace and truth” (v. 14). Only “the only God, who is at the Father’s side” (v. 18). No other god could offer such a blessing apart from the one who is at the Father’s side (or, more literally, “in the bosom of the Father”). When the Son takes his beloved one into his bosom (13:23), he brings them with him where he is (17:24): in the bosom of the Father.

John has thus affirmed for Christ an identity shared by no human teacher or savior-figure in any other belief system in the world. And on that identity the gospel stands. For if there is no eternal Son, God is not really a Father, and he could never give us the right to be his children. If Christ does not have this unique identity, he does not have the ability to bring us into the bosom of the Father. A mere creature could never share with us what he himself had never known.

John has also shown why Christ-centeredness is not imbalanced, as though such devotion to Christ disregards the Father and the Spirit. Christ’s very identity is the Word who reveals God, and the Son beloved of the Father, and the Spirit-anointed one (or “Christ”). Thus, John issues a Trinitarian call to faith in Jesus: “but these are written so that you may believe that Jesus is the Christ, the Son of God, and that by believing you may have life in his name” (20:31). It means that for Christians to say with Paul “for me to live is Christ” (Phil. 1:21) is to share the Father’s love and concern. To put Christ at the center of our theology is to do like the Father, who has his Son at the center of his “purpose, which he set forth in Christ as a plan for the fullness of time, to unite all things in him, things in heaven and things on earth” (Eph. 1:9–10). To bear witness to Christ is to keep in step with the Spirit (John 15:26–27), who inspired the biblical writers for that very purpose (5:46). “Christ alone stands at the center of God’s eternal purposes, Christ alone is the object of our saving faith, and therefore Christ alone must stand at the very center of our theology.”

This evangelical principle of the exclusive identity of Christ has remained the backbone of how the church has thought of the gospel down the centuries.

Excerpted from Gospel People by Michael Reeves, ©2022. Used by permission of Crossway.