Home Resources Books Understanding the Malaise of the Modern World 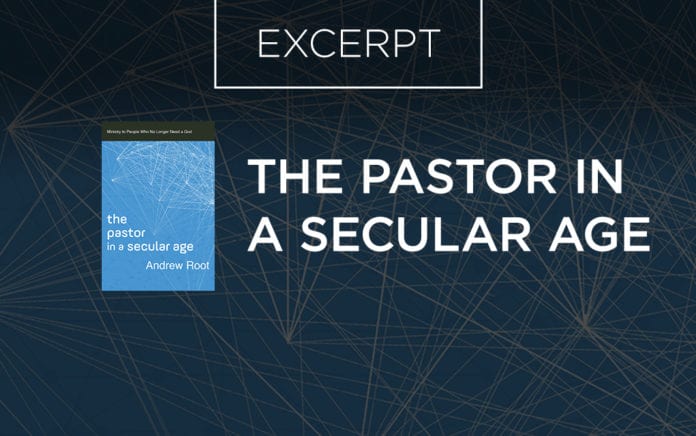 The modern world’s rejection of the idea of God has opened a strange emptiness and insignificance in our daily lives.

Excerpted From
The Pastor in a Secular Age
By Andrew Root

“I’m not sure what I’m doing,” he said. I’d never met him before, but I’d talked with hundreds of hims (and hers) after speaking at pastors’ conferences. The air of fragile confidence was familiar, this sense of being lost in the house you grew up in. “I’ve been a pastor for 15 years, and most days I have no idea what I’m doing,” he continued.

I could only pause and allow the silence to invite him to say more. “I mean, I know what I’m doing, maybe all too well. I have no trouble filling my days and doing the things that make me a good pastor. I actually think I am a good, even faithful, pastor.”

There was the confidence. When it came to being a pastoral professional, he had it. These had been 15 years of success. Of course he had stories of failures and mistakes, but like all good professionals, he had learned from them. So in a sense, he had a very good idea of what he was doing and was successful at it.

But then the confidence cracked. “Yet I have this sick feeling, this kind of dull unease in my stomach, that something is wrong. I’m not sure of its origins or why it’s there, but it’s just this discomfort, like I’m missing something.”

“Like something is slipping through your fingers,” I said.

“Yes,” he returned, “but in a way that gives me a nauseous feeling.”

WELCOME TO THE MALAISE

Canada is known for snow, hockey pucks and Tim Horton’s coffee. Not surprisingly, the Great White North is less well known for hosting the Massey Lectures on politics, culture and philosophy. Yet these lectures are famous, not only being aired on the CBC (Canadian Broadcast Channel) but also boasting past presenters like Noam Chomsky and Martin Luther King Jr. In 1991, Charles Taylor, the Montreal philosopher whom we met in the first volume of this series, delivered his lectures, called “The Malaise of Modernity.” Taylor articulated something in these lectures that he would continue to explore years later in his book A Secular Age, in which he investigates the way that our late modern world strikes us with a general feeling of discomfort, a kind of uneasiness. Taylor describes this as a malaise, a kind of nagging illness, the source of which can’t be identified. He explains that this low-grade cultural stomachache may have its origin in at least three things: “(1) the sense of the fragility of meaning, [and the] search for an overarching significance; (2) a felt flatness of our attempts to solemnize the crucial moments of passage in our lives; and (3) the utter emptiness of the ordinary.”

From Outreach Magazine  The Sermon on the Mount and Human Flourishing

It’s no wonder that the pastor I met above felt a dull sense of unease, a vocational nauseousness, like he didn’t know what he was doing. If this cultural malaise has indeed arrived, then it is no surprise that the pastor would feel like patient zero. In A Secular Age, Taylor calls this unease “the malaise of immanence.” It is as though living in a world free of transcendence, enchantment and an organization around divine action has given us a freedom that leaves us with a discomfort we can’t pinpoint, a dull boredom we can’t shake. As I discussed in Volume 1, we have arrived in a secular age not because people no longer see it as necessary to go to church (and are willing to mark “none” on a survey), but rather because the very idea that there could be a personal God who orders and acts in the cosmos has become unbelievable (or at least contested). Or we could say that we now live in a world where it is quite easy to forget, deny or simply not care that there is a transcendent dimension to reality. Taylor’s point is that the price paid for this freedom is an uneasy boredom, an ailment of felt flatness.

If ministry were only about getting people to join the institutional church, then the pastor could hone her professional skills and battle for market share. And many denominations and seminaries have settled for this understanding of the pastor. But what caused the pastor I was talking with to have a stomachache and overall feeling of malaise was the unexpressed realization that the very God he preached had become unnecessary. And in turn this led him to feel somewhere deep enough beyond words that in this shrouded void he was not needed at all.

He was standing in the line of an old vocational tradition, of course, but he nevertheless felt like he was on new ground. Pastors like Augustine of Hippo, Thomas Becket and Jonathan Edwards never dealt with the fragility of meaning, the flatness of our moments of passage and the emptiness of the ordinary. It would be as hard for them to understand the feeling of malaise as it would a smartphone. They ministered in a world where haunting meaning spilled out of every corner in omens and revelations. And not only were baptisms, weddings and festivals embedded in the thick cosmic drama of worship and absolution (so much so that Becket had to remind King Henry that he too must obey), but the passage from life to death was short and sudden. This was anything but flat, and the ordinary was filled to overflowing. For Augustine and Becket, anything ordinary existed in a chain of being that played its part in sacred reality. For Edwards, ordinariness, particularly of raising children, held such cosmic weight that his primary pastoral task (particularly from the pulpit) was to push his congregants to live upright ordinary lives in order to raise children well enough to keep them from hell. For Edwards’ Calvinist Puritanism, ordinary life was the stage where heaven and hell collided.

Not so much for this pastor. He was living in a different time, quite literally. … The world of the pastor I was talking with at the conference couldn’t be more different. But this radical difference didn’t come through a coup d’état. It was not a direct and immediate overthrow that led the open wormholes one day to suddenly be paved over the next. Rather, getting us to this secular age, in which time is frozen in linear progression and ordinary life is freed from the pressure of cosmic significance, has taken many years and many more small changes that have slowly but surely shrunk the once gaping wormholes.

Excerpted from The Pastor in a Secular Age by Andrew Root, ©2019. Used by permission of Baker Publishing BakerPublishingGroup.com.

Finding a Pastor’s State of Mind

Survey: How Churches Are Responding to the Coronavirus Crisis

Why We Needed to Create a Cultural Research Center