Home Resources Who Then Will We Trust? 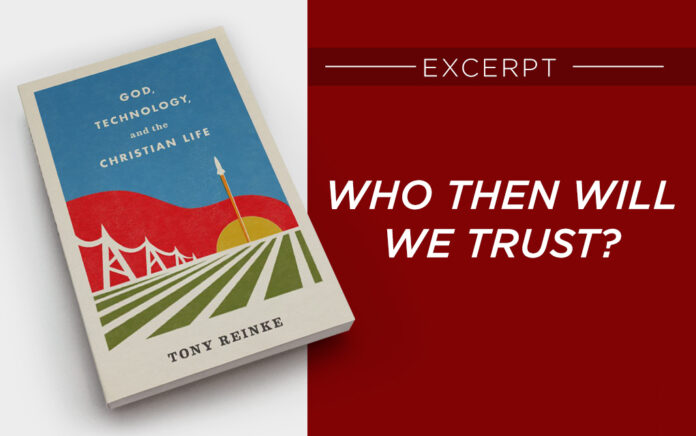 We need technology, but we often idolize technology.

God, Technology and the Christian Life

Within God’s universe, technology becomes meaningful for Christians who fear God and serve others. But we still live in a fallen world, with wars and rumors of wars and anger between people and nations. No trip to the moon or mission to Mars can end human aggression. And the resulting war horses and war chariots are not entirely contrary to God’s will, because God has sanctioned governments to lawfully wield swords and guns and tanks to punish and defend.

We need technology, but we often idolize technology. The people of God were condemned in Isaiah because they turned to human discovery and innovation to find their security. When it comes to saving ourselves, we amass wealth and chariots, cling to idols, hide ourselves inside our innovations, climb up high towers, and crouch behind fortified walls. When it comes to salvation, technology is an inevitable letdown. “The war horse is a false hope for salvation, and by its great might it cannot rescue” (Ps. 33:17). Man cannot save himself. “Stop regarding man in whose nostrils is breath, for of what account is he?” (Isa. 2:22). No innovator and no innovation can ultimately save you.

Science materializes our deepest heart longings into machines that we set our hopes on. “For humanity, technology is not simply a means to physical survival; it is also a means toward whatever he conceives of as spiritual fulfillment.” So we can agree with Paul Virilio, a critic of modern technology, when he says that we resist “not technology proper, but the propensity for us to confer upon technology a salvific function.” Indeed, “it would be unforgivable to allow ourselves to be deceived by the kind of utopia which insinuates that technology will ultimately bring about happiness and a greater sense of humanity.” It won’t. Technology can do many things, but it will never satisfy our souls. Misused human innovation makes us spiritually numb. This is why the prophet Isaiah used brass and iron as metaphors for the spiritual dullness of sinful hearts.

And yet what we make with brass and iron and silicon is amazing. The microprocessor is the most powerful thing on earth, and we own several of them without a license, permit, or government approval. The computers, smartphones, and gaming systems powered by these chips are incredible. The tiny flexible wires that could be inserted into the brain of a paralyzed man to grant him new telekinetic powers of motion are remarkable. The end of polio and the end of cancer and the end of dementia, should we see all these victories, would be astonishing feats of medical technology, and we would give God all the glory for them, because he creates minds to answer these problems and to push back against the fall.

But all these advances cannot fix what is truly broken.

Computer scientist Alan Kay once joked that technology is anything invented after you were born. But technology is far more expansive, and it includes the gifts of the nineteenth century that we now take for granted. Our innovation-saturated life today is a divine gift to us through the channel of many brilliant minds who were busy innovating decades before we were born.

The minds of the nineteenth century sped up tech advance. But as tech advances accelerated, contemporary preachers stepped into pulpits with concerns. With three-quarters of the century done, pastor J. C. Ryle cautioned that innovation blinds us to more important matters, saying: “We live in an age of progress—an age of steam-engines and machinery, of locomotion and invention. We live in an age when the multitude are increasingly absorbed in earthly things—in railways, and docks, and mines, and commerce, and trade, and banks, and shops, and cotton, and corn, and iron, and gold. We live in an age when there is a false glare on the things of time, and a great mist over the things of eternity.”

In this wave of modern marvels, Charles Spurgeon was wise enough to see human innovation as the harnessing of God’s patterns in creation. But even as he celebrated new innovation, he offered strong caution. “We have heard of engineers who could bridge the widest gulfs,” he said from the pulpit. “We have seen men who could force the lightning’s flash to carry a message for them; we know that men can control the sunbeams for their photography, and electricity for their telegraphy; but where dwells the man, where even is the angel, who can convert an immortal soul?” Technology is powerless to turn sinners away from the false promises of this world in order to find their satisfaction in Christ. Regeneration is the truly remarkable power in any age.

God deposited a wealth of innovations and technological potential into creation, not to lead us into temptation, but to reveal what we most love and where we place our greatest trust. That may be in God. Or that may be in chariots, missiles, cyberwar, vaccines, dataism, AI, or anti-aging discoveries. “Some trust in chariots and some in horses, but we trust in the name of the Lord our God” (Ps. 20:7). This is the human dilemma. Human innovation is a wonderful gift but a disappointing god. We cannot save ourselves. In the end, our innovations leave hearts unsatisfied, souls lost, and bodies cold in the grave.

Excerpted from God, Technology, and the Christian Life by Tony Reinke, ©2022. Used by permission of Crossway.