Home Resources Books Take Heart Because God Is With You 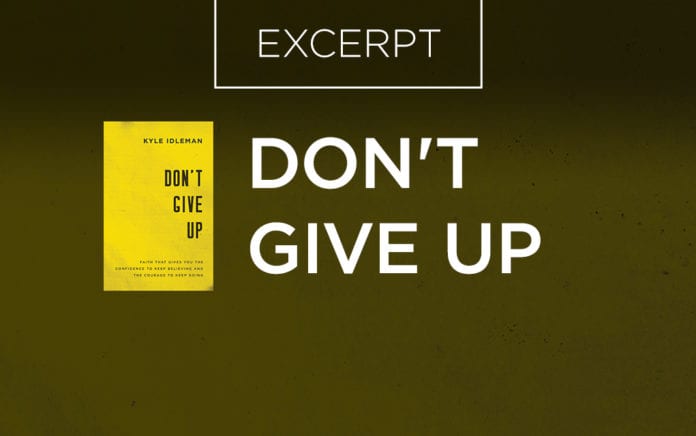 Excerpted From Don’t Give Up By Kyle Idleman I love the command from Scripture to “take heart.” It’s for those who are losing heart. Hebrews 11 mentions a character from the Old Testament who learned to take heart. His name is Gideon, and we read about him in Judges 6. In Judges, Israel is constantly […]

Excerpted From
Don’t Give Up
By Kyle Idleman

I love the command from Scripture to “take heart.” It’s for those who are losing heart.

Hebrews 11 mentions a character from the Old Testament who learned to take heart. His name is Gideon, and we read about him in Judges 6. In Judges, Israel is constantly under the thumb of some other nation. In this case, it’s the Midianites. They’ve driven many Israelites to hide in hills and caves. The people cry out to God, as they do in each of the episodes in Judges—and God sends a “judge,” a deliverer.

The angel comes to Gideon to tell him he’ll be that judge this time. Gideon, like everyone else, is laying low. He’s threshing wheat in a winepress. “The Lord is with you, mighty warrior,” the angel says (Judges 6:12).

Think about this. Gideon is hiding out, but God sees him as a mighty warrior. Gideon immediately tells the angel all the reasons he’s not up to the task. Just like Moses told God. Just like you and I do. He has no courage because he has no confidence—he’s the weakest of a weak family, he points out. Here am I, send somebody else.

Maybe you’d expect God to say, “Listen, Gideon, I believe in you. Dig down deep! Find the right stuff inside yourself. You can do it!” There is no montage of Gideon going into fight training while the up-tempo soundtrack plays. No psych-up. The coach doesn’t come in for a halftime pep talk. None of that. God just says five little words: “I will be with you” (v. 16).

Gideon takes with him three hundred men and some very poor excuses for weaponry, and he destroys a vast Midianite army. Sometimes people teach the story as being about Gideon’s military cleverness, but it’s not—it’s about the power of God, and Gideon finding his confidence in that rather than himself.

As a matter of fact, any excess confidence in himself or his abilities would have ruined the whole thing. We have to be delivered from all that and learn to have courage based on confidence in God. “The Lord is my helper; I will not be afraid” (Heb. 13:6).

From Outreach Magazine  Why the Worst Decision Is Not Making One

I have a problem with this at certain, predictable times: Saturday night, after preaching that evening’s service, and before the Sunday morning service. Sometimes (too many times) it doesn’t go as well as I’d hoped on Saturday night, and then I have to face preaching that same sermon again the next morning. I usually pray my way through it, and the Holy Spirit gives me the strength I need. But on occasion, a few times a year, I am crippled by feelings of inadequacy. I get up on Sunday morning with feelings of dread, frightened, my confidence shot. Ready to run away and find a place to hide.

Why? Because Saturday night exposed me. I leaned on my expertise and found out how foolish it is to do that. Every now and then, God needs to strip away the illusions and show us where the power is coming from—and where we can’t afford to rely upon it to come from.

When that moment comes, I gently wake my wife and tell her it’s one of those mornings. I’m not up to this. I don’t want to do this.

Some spouses would say, “Oh, honey, just get your mind off it. You’ll be fine. Go back to sleep.” She doesn’t do that, nor does she say, “Honey, you’re the best! Believe in yourself. You’re brilliant and dynamic and sexy.”

She doesn’t say anything directly to me, as a matter of fact. She speaks to God.

My wife takes my hands in hers and begins to pray God’s truth over me. Her words remind me to lift up my eyes to where my help comes from. She reminds me my faith is built on nothing less than Jesus and his righteousness. Not me. She helps me seize God’s charge to Joshua, to be strong and courageous, because I go in the name of the Lord. Not my name. I matter only as much as the glove that contains the hand. The life and power and vitality come from the hand of God. A glove is just a glove is just a glove, and I’m just a glove.

There is something incredibly freeing about being a glove.

He’s better than accepting a marriage that isn’t what God designed it to be, a job that isn’t glorifying him in the way you know it could, or a family that isn’t thriving in the power of his special presence and blessing.

I know all about the world and what it throws at you. You have worries, doubts, lapses of confidence. I know you wake up sometimes consumed by sheer fright, paralyzed.

But instead of telling Jesus about your worries, talk back to those worries for a change. Interrupt them. Be downright rude to your worries and tell them about Jesus. Tell them he’s better—better than they are, better than the world itself. Worries never last, but Jesus is forever.

Jesus is better. Put your confidence in him. Take heart. Don’t give up.

Tell me more about this book »
Order this book from Amazon.com »
Read more from Kyle Idleman »

Excerpted from Don’t Give Up by Kyle Idleman. Published by Baker Books, a division of Baker Publishing Group. Copyright 2019. Used by permission. BakerPublishingGroup.com.