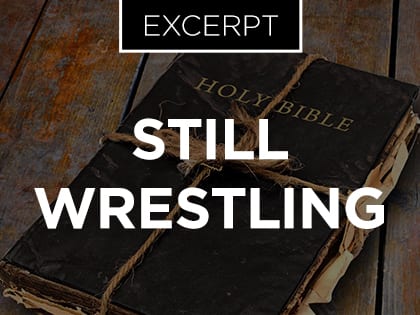 If you have experienced family tragedies that defy description, there are stories in the Bible that help you wrestle with God.

“After Nathan had gone home, the Lord struck the child that Uriah’s wife had borne to David, and he became ill. David pleaded with God for the child. He fasted and spent the nights lying in sackcloth on the ground. The elders of his household stood beside him to get him up from the ground, but he refused, and he would not eat any food with them.
On the seventh day, the child died. David’s attendants were afraid to tell him that the child was dead, for they thought, ‘While the child was still living, he wouldn’t listen to us when we spoke to him. How can we now tell him the child is dead? He may do something desperate.’”
—2 Samuel 12:15–18

I hate math. Unless it involves large numbers going into and staying in my bank account, math isn’t something I even want to consider. And wouldn’t you know it? As a former preacher turned fledgling real estate guy turned preacher again, I need not worry about dealing with an expanding bank account. Waistline? That’s another story in somebody else’s book.

In the meantime, I hate math. Either my mind doesn’t get it or I just don’t have the patience to stick with it. If you are a mathematician, please don’t take this personally, but your passion is not exciting or stimulating to me. I am not a numbers kind of guy. No, sir. Bring me a strawberry lemonade cake, and I might change my mind. But don’t try to figure out a formula for that possible equation. For me there aren’t any percentages in it.

I called my tenth grader into the room just a few minutes ago so he could explain to me one more time the math concept I want to use here. I think I now understand the concept of a cubed number. Since you may not be the dumbest math person in the world (that’s one of my titles, thank you very much), you’ve most likely got this one down already.

On a scale of one to ten, doctors often want us to tell them how much a wound or infection hurts. I have never had much physical pain. Well, maybe a toothache or two that were excruciating. Several years ago, I cracked a few ribs, broke an elbow and separated my shoulder all in the same two-hand touch football game.

I was forty-eight years old at the time and determined to keep up with all the twenty- and thirty-something-year-old guys in our Sunday school class. I equipped myself well that day. But on the third interception that I ran back for a touchdown (who’s the man?), I got shoved hard, and down I went. I knew I was hurt, and thirty minutes or so after the game was over, I was really hurting. I slept that night in the recliner, doped up on muscle relaxers. After I preached in discomfort the next morning, one of the docs at church verified the cracked ribs, and had me buy a brace for the sprained wrist. Life went on. I continued to hit the gym in the mornings and lift weights. Six weeks later, I was tired of the nagging pain and went to the doctor, where I learned my elbow had been broken the entire time. Three months later? I learned my shoulder had been separated as well.

The moral of the story? Old guys should probably not play contact sports, and my tolerance for pain is much higher than I thought. Or else I am just plain stupid. That may be the case. I mean, how many other knuckleheads lift weights with a broken elbow and a separated shoulder? The truth is, I am not the best guy to use when trying to rate pain on a scale.

From Outreach Magazine  How to Believe God

But take my story: [Dealing with] the multiple rapes of a handicapped boy (my son). The disbelief of those you depend on for emotional, mental and familial support. The murder of your wife and son and all that came afterward … and there is still so much more. The ripple effects never go away. The fallout is still happening. So take all of that and try to put it on a typical pain-tolerance scale. A 10 doesn’t even come close. There is no chart to plot that kind of pain. Or should I say this kind of pain?

Some days the pain is so great that I have no idea what the end of the story is going to be. Other days, the pain is more manageable, and I can imagine life in a much better light. But the best way I know to describe the emotional, physical, mental and spiritual pain my family experienced and still endures is pain cubed.

Here’s how it works: If you take a level of pain that is already off the charts and multiply it by itself three times, then you get a pain level whose mathematical quantity is astronomical. Maybe you could find a better way to illustrate it. Maybe you could describe it in a fashion far easier to understand. I’ll give you that. But this I promise: Unless you have lost a child, you cannot comprehend the level of grief, pain and suffering I am trying to describe.

Seriously. It is that bad. Factor in all the horror of multiple episodes of rape and the shocking brutality of a double murder, and you have moved well beyond anything anybody can easily fathom or describe. This isn’t about a contest where we try to decide whose pain is greater. Not my point. Not my intention. And yet, I am grasping at straws to get you to see how badly I hurt, how desperate I was for relief.

Once upon a time, I was a sailor in Uncle Sam’s Canoe Club (that’s the U.S. Navy, if you can’t interpret). Somewhere off the coast of Brazil on our way to Rio, I developed a horrendously severe toothache. We had no dentist or real doctor on the ship. The Chief Corpsman on board had nothing to give me strong enough to mask the pain. At one point, they gave me muscle relaxers to make me loopy—loopy enough to have no idea where I was or why I hurt.

Much of that time I cannot remember. But I do have amazingly total recall of waves of pain so severe (yeah, there’s that word again) that they would leave me soaking wet in sweat. If it sounds like bad stuff, it was. But, it was child’s play compared to the pain that came with our family tragedy.

I remember telling people I was hurt but wasn’t suicidal. (“Liar, liar, pants on fire.” Say it at least three times for maximum truthfulness and effect.)

I lied. I am no King David. While his servants were afraid of what he might do in his desperation, the rest of the story tells us of a man who was able to hold it all together. As for me, there were days and moments and times when all I could imagine was how sweet the end of a gun barrel would taste—how cool and comforting would be the final feel of steel between my teeth. The pain was that intense. And debilitating. The pain came in wave after wave that didn’t just threaten to overwhelm me. It did. I would literally (and quite figuratively) get up on my feet, and before my equilibrium was restored, down I went again.

From Outreach Magazine  Finding Your Place in a World Made Beautiful

Over and over. Again, and again. I grew hoarse from screaming in impotent rage at the God (Did you catch “the God”? At that point, I wasn’t sure if I could call him my God) who could have stopped all this but didn’t. And they wanted me to preach. To get back to normal. To do whatever I needed to do so they could get back to normal.

The Bible tells us that David washed his face and got back to his life, but it’s fair to say that he didn’t have great relationships with his kids. It’s hard to know exactly how his affair with Bathsheba and the loss of this child affected David long-term. At least one of my boys has insinuated that I became an absentee father for a time. Is that normal? I don’t know how others would react, but when I wasn’t screaming, I was emotionally checked out. I knew people were around me. I knew my family was close by. But everything I did, everything I saw and everything I heard was wrapped up, muffled by a seemingly impenetrable fog. It’s hard to emotionally provide for the people you love when you are bereft and empty inside.

I’ll never forget that first post-murder Christmas morning opening presents under the tree. We had lots of gifts that year, but only thanks to Amazon. The whole day felt like an out-of-body experience. And that just might be the best way to describe how I interacted with others and, unfortunately, with my children. If you were on the outside looking in, flat and mechanical would have been good descriptions.

Flat and mechanical might have become my new normal had it not been for the spark Becki, my wife now, brought into my life. We had not spoken in more than twenty-five years. She had broken my heart back in those days, and I joined the Navy to get away from her. I’ll never forget the first time we talked after all those years of no contact. It was like hanging up the phone only to reengage the same conversation the next day. And, just like that, there was something to look forward to. And before I could understand what was happening, I was laughing again. Still sad, still hurting but learning from her how to see joy again.

There is no going back for me. The hands of time cannot be rewound. All I know how to do is move forward.

Sometimes bravely. More times than not, tentatively and fearfully. But the fact that I am moving forward at all should probably be laid at Becki’s feet. She fanned the flames of life again, and I will always be grateful to her for the hope and direction she has brought into our lives.

With that out of the way, what follows in this book is not more of what you have already read. What I hope you see is my story in the stories of biblical characters. What I hope you see even more is your story in the lives of biblical characters . . . as they, too, were shaped and changed by their own weakness, but most importantly, by the [perceived] weakness of God.