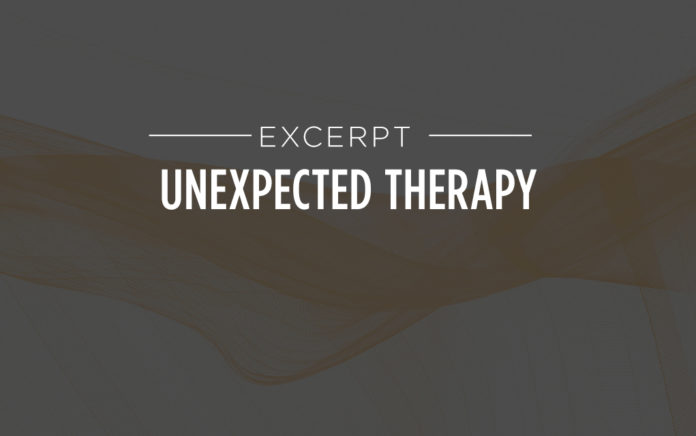 Excerpted From
The Minister’s Wife
By Karen Stiller

“That dog is so needy!” Brent would say in dismay as Dewey would trot from guest to guest whenever our living room was full.

That’s why I knew he’d be perfect as a therapy dog, if he could only pass the test, which included performing maneuvers of various kinds in front of a crowd of eager wannabes.

We were all there at 8 p.m. with our partners lying at our feet on six-foot-long leashes (flat collars only!). I had walked Dewey for three hours earlier that day. I was stiff but he was mellow, and that was my strategy since he barks at other dogs like a soldier at his post. I walked into this night thinking we’d likely fail these tricky tests.

He must have sensed what was at stake—old ladies cooing his name and, surprisingly, letting him lick their soft, powdered faces. I whipped him into a frenzy when I tossed a ball toward the middle of the room. I calmed him down quickly, as instructed.

An old man in a bathrobe moaned like a patient in pain. Dewey licked his hand and glanced around the room, bored. Then we had to cross paths with another owner and her dog, a black lab that Dewey had been exchanging glances with since the session began.

“Stop and chat with each other,” said the woman in charge of the evaluation. “Let’s see how they interact.” Would they show their teeth? Snarl? I assumed we were doomed, but when our dogs French-kissed, I knew we had passed.

When I first met her, Millicent, a minister’s wife, was 100 years old and lived in a small apartment in a seniors home just down the street. She was No. 4 on my list of seniors who wanted me to come by with Dewey once a week for a therapy-dog visit.

We visited once a week, moving from room to room, furnished with belongings edited and condensed and packed into these spaces with all that remains from 80-plus years. South African art hung on Millicent’s walls, a reminder of when she and her husband, long gone now, had lived and served at a church there so many years ago.

From Outreach Magazine  What If Your Successor Doesn't Honor You?

“What was it like to be a minister’s wife back then?” I asked.

“I wasn’t very good at it,” Millicent said.

I was thinking that back then things were clear and well defined, with the roles spelled out for everyone, like a scripted play with stage directions. How could elegant and kind Millicent not have been good at it?

Of course, I know the feeling of not being good enough is real and that clearly it can last a lifetime.

She meant this as a gift, and so I accepted it as one.

“Oh, thank you,” I said. But still I wondered, What was I doing wrong before? What am I doing better now?

Millicent told me she had once been in a church meeting with other ladies when a mouse dashed across the floor and perched for a second on her foot.

I wondered what the other ladies might have thought about their minister’s wife sitting in a meeting with a mouse on her foot, a tiny rebellion against expectation. For just a second, Millicent had departed from the script.

Gradually, as the weeks went on, I spent more time with Millicent than anyone. This was not good therapy-dog practice, but I liked her so much. I felt that magical minister’s wife connection. I knew something crucial about her and her heart because she had served alongside her husband, supporting him, worshiping with him, helping him, listening to him preach week in and week out.

Maybe sometimes they had thought about a different life and then shook their heads clear of that. Maybe they had read The Imitation of Christ over their coffee in the morning, after reading the paper, just as Brent and I try to do before charging off in our different directions.

I thought of the years Millicent had spent serving with her husband, loving him through the light and the shadows that every ministry brings, and then of the years she had spent alone without him after he had died and gone on without her. I guessed it had gone by like a race for her, and now she lived in this quiet, small room, her big black Bible with its worn, softened cover on the table beside her.

From Outreach Magazine  11 Questions for (Not Just) Rural Church Leaders

I could end up like this, I thought. And I would not mind.

Dewey loved Millicent and ate the Kleenex from her crowded side table whenever he could. Finally the day came when I told her it was my last visit. We were moving to a new church in a city four hours away. I was sad to end my visits with Millicent, faithful and holy in her room after all these years and still wondering sometimes whether she had been a good enough minister’s wife.

“Millicent, I will see you again, on the other side,” I told her. “Maybe there’s a nice lounging area in heaven, just for ministers’ wives.”

We both laughed. She would be in heaven very soon, I was sure.

She looked up at me from her armchair, oxygen tank by her side. She wore a lovely pastel blouse and matching pants that her daughter had bought her, just a little bit dressy for a weekday, as befit her style.

“The Lord bless you and keep you,” Millicent said and raised her quavering hand with her fragile, parchment-like skin. She traced the sign of the cross through the air, and it hung there between us, a benediction in that tiny room.

Millicent blessed me. I am blessed.