Home Resources We Are a Spiritual Family 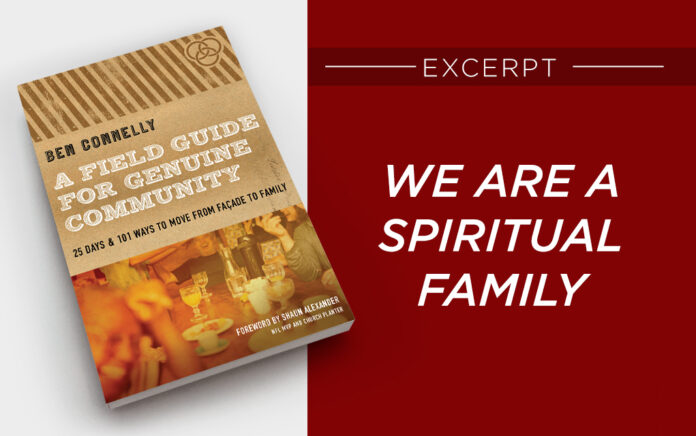 Excerpted from ‘A Field Guide for Genuine Community’ (Moody)

A Field Guide for Genuine Community

Did you know the Bible never actually uses the term “community”? This may shock you, since it is such a common word in churches. Since community isn’t used in the Bible and thus is not specifically defined, Christians often fall into two camps: some read the Bible through a Western, individualistic lens, while others read the Bible through the lens of the kind of community they have experienced. While both are easy mistakes, neither lead to the others-focused “brotherhood” (today we might say “siblinghood”) and the desperate need for others that Dietrich Bonhoeffer described in his classic Life Together:

“God has put this Word into the mouth of men in order that it may be communicated to other men. When one person is struck by the Word, he speaks it to others. God has willed that we should seek him and find his living Word in the witness of a brother, in the mouth of a man. Therefore, a Christian needs another Christian who speaks God’s Word to him. He needs him again and again when he becomes uncertain and discouraged, for by himself he cannot help himself without belying the truth. He needs his brother man as a bearer and proclaimer of the divine word of salvation. He needs his brother solely because of Jesus Christ. The Christ in his own heart is weaker than the Christ in the word of his brother; his own heart is uncertain, his brother’s is sure.”

Most of the Bible’s commands that translate into English as “you” are plural in their original languages: they are written to people together, not to individuals alone. So as a good Texan I’m proud to say that most of the Bible’s commands are literally addressed to “y’all!” (Yeehaw.) Contrary to some Christian pop culture, the Bible is not “God’s love letter to you”; it is not an individualistic “guidebook before leaving earth.” Rather, the Bible is the story of a unified, pursuing God (the Trinity—Father, Son, and Spirit) and His unified, multiplying family (called Israel in the Old Testament and the Church in the New Testament and after). It’s full of commands and stories, of that three-in-one God shaping that many-as-one family into his image—and often using other family members to accomplish that goal.

“To all those in Rome who are loved by God and called to be saints” and “To the church of God that is in Corinth, to those sanctified in Christ Jesus, called to be saints together with all those who in every place call upon the name of our Lord Jesus Christ, both their Lord and ours” (Rom. 1:7; 1 Cor. 1:2).

Reading the Bible as it was written disallows an individualized interpretation, or an individualistic faith or life! In fact, it is impossible to fulfill many of the Bible’s commands outside of deep relationship and shared life with other followers of Jesus. We are designed to be dependent on God and others. We need help reclaiming the depth of that dependence.

Alternatively, church leaders and everyday Christians often assume that the life described in the Bible equates to our current experiences of “church community.” (To some extent, we likely all do this.) We might read Acts 2:42 for example (which describes the early church as follows: “They devoted themselves to the apostles’ teaching and the fellowship, to the breaking of bread and the prayers”) and interpret it as, “They devoted themselves to the preacher’s sermon and a Wednesday group, to sharing a monthly potluck and praying for each other.” Sound familiar? Many churches’ annual vision series are even shaped around asking for commitment to a version of those things: Sundays, small groups, sharing resources, and serving each other.

But in its early days, God’s church did not equate “fellowship” (koinonia, the word used in Acts 2:42, that we assume looks like our communities today) to showing up to a church service or event, whether large or small. Being “devoted … to the fellowship” as much stronger connotation. Used nineteen times in the New Testament, toward both God and others, koinonia denotes intimate, ongoing participation together and deep communion for mutual benefit. The word refers to “the share with [some]one has in anything”; in other words, it paints a picture of the co-ownership and deep responsibility that members of God’s first churches had for each other’s spiritual growth, health, and discipleship. The “fellowship” God calls His people to looks more like the “commitment-to-the-death” pact seen in J.R.R. Tolkien’s Fellowship of the Ring than a Wednesday night coffee conversation I can skip if I have a headache.

From Outreach Magazine  How to Love for the Unloveable

Just like we can interpret the term “community” through our experiential lenses, we can do the same with the word “family,” which is a loaded and broken term for many. I believe that the all-too-common brokenness in families today is a result of spiritual warfare, as Satan consistently destroys the closest relationships people are called to, and thus downplays the spiritual imagery of God and his people that could otherwise be reflected in those actual relationships.

Over and over, God uses different terms to describe His people in familial images:

The Church (together) is the Bride of Christ: Jesus died for a people, forgave the sins of a people, and is King of that people. He is the husband of his church, not the spiritual spouse of individual persons.

Women and men who follow Jesus are daughters and sons together of God: God is our Father, and each of His people have been adopted into His family, as co-heirs of all His glorious promises through Christ.

Women and men are sisters and brothers together in Christ: Jesus is our shared big brother, the firstborn of his followers; every Christian’s primary relationship to others is “spiritual siblinghood.”

The church (together) is the household of God: As I taught the elementary kids in our church family recently, a household is different than a house. The church is not a physical building; it is rather what the “house holds”: houses most often hold a literal family, and a spiritual sense, we are a family of God’s people.

Adapted from A Field Guide for Genuine Community: 25 Days and 101 Ways to Move from Façade to Family by Ben Connelly (© 2021). Published by Moody Publishers. Used by permission.