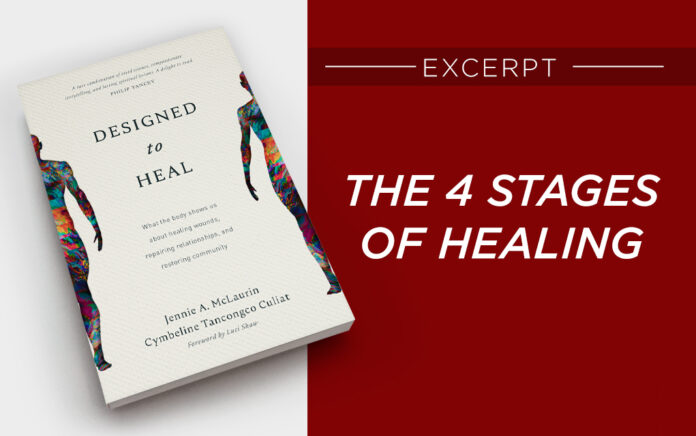 The 4 Stages of Healing Wounds are a universal human experience. From scraped knees to torn ligaments to life-threatening lacerations, our bodies become injured through both use and disuse, through unintentional and sometimes very intentional means. Wounds may be self-inflicted or inflicted by another person, animal, or object. We even blame God for some wounds—at […]

The 4 Stages of Healing

Wounds are a universal human experience. From scraped knees to torn ligaments to life-threatening lacerations, our bodies become injured through both use and disuse, through unintentional and sometimes very intentional means. Wounds may be self-inflicted or inflicted by another person, animal, or object. We even blame God for some wounds—at least on insurance forms—such as when lightning strikes. Occasionally, we actually choose to be wounded, knowing it is a necessary route to ultimate healing—surgical procedures are typically undertaken for this reason.

Most of us live our lives with no idea of the complexity of the wound-healing process. Just as we take for granted the regular beating of our heart, we simply count on healing to be there for us, always ready and always in top shape.

Fortunately, our body’s wound healing system does seem to work almost flawlessly most of the time. The healing phases are precise, interdependent, and directed toward wholeness.

The four overlapping but distinct stages of wound healing are hemostasis, or clotting. Then inflammation, an important defensive posture that brings in critical helping cells, follows. New tissue formation and maturation develop next. Finally, remodeling occurs, which is key to future function and restoration of health.

Clotting, inflammation, tissue formation, and remodeling serve as our signposts in wound healing. If the separate critical stages are interrupted or don’t follow the proper order, things go predictably off course. Self-injury, infection, harmful growths, and inflexible scars are a few outcomes that can occur from impaired wound healing.

In medicine, we sometimes see inflammation grow until a deep abscess breaks open—a burst appendix is a common example. Leftover debris in wound sites presents a particular problem. At first, the body tries to wall it off, to encapsulate it. But the longer it goes unrecognized, the greater the chance for an infection to develop. Sometimes, leftover debris in a puncture wound site will work its way to the skin surface, as the skin forms new layers from below. Pieces of glass, splinters of wood, and stitches have found their way up and out like this. Unhealed wounds can also form tunnels, called sinus tracts. These tunnels hide the wound origins but drain infection into an open space, like the mouth or neck. The surgeon has to follow the tunnel to its source rather than simply close the opening, or it will never heal.

Similarly, our hidden unhealed wounds of the spirit will make themselves known, causing people to leave their spouse, their church, and their longtime friends. Withdrawal, anger, and self-destructive habits can occur when healing doesn’t. The tragedies of post-traumatic stress disorder and suicide are dramatic results of earlier unhealed trauma. In American society, and especially in our churches, people increasingly seem to separate themselves into encapsulated defensive groups rather than resolve to clear the debris and seek closure. We avoid conflicting viewpoints instead of working together to heal wounds that cause division. Separation is not a sign of health.

Polarization in America is at an all-time high, not just politically but also socially. For example, mainline Protestant churches used to have members who might be described as theologically conservative, moderate, or liberal, all worshiping together. Perhaps tradition drove attendance, but in any case, a spectrum of views was clearly present within these large denominations. Now, though, individual churches tend to draw people who are like-minded, with little room for those who hold different ways of thinking. Congregations are becoming less diverse, following the same patterns as political and social movements, abandoning any uniting middle ground.

Experts in church demographics show these changes visually. What was formerly a bell curve distribution of shared beliefs among members is now inverted, with two peaks on the far extremes and a long shallow space in the middle. This inverse curve depicting polarization looks like a deep gaping wound, impossible to close without a graft.

Of course, not all of our personal wounds are deep and life-threatening. Some are like a childhood scraped knee. We get a cute Band-Aid and move on, ignoring it after a day or two. A few minor disagreements with a partner or a pastor rarely cause a split. But an inability to recognize and voice disagreement, to go through the stages necessary for restoration of relational trust and communication, does lead to isolation, a walling off, and an eventual rupture with scarring. The accumulation of such scars can become crippling over time.

The church—the collection of Christians worldwide—is also called the body of Christ: one body with many members. The idea echoes what scientists are also affirming: that the universe acts as an organism, with every part of it related and interdependent upon the whole. Whether it is the threat of a pandemic like COVID-19, the global climate change that affects individual places in a variety of ways, or the solar system’s patterns of moons circling planets, the pull of one body on another—one element affecting many others—is becoming more apparent.

If the church is meant to mirror the body, with all of its amazing powers to heal from wounds, why is it split into so many pieces? There have been schisms since early Christianity, deep gashes that separated the faithful from one another as disputes about both doctrine and practice ruptured the community. Throughout the centuries, the separations have continued, as denominational and cultural understandings limit fellowship at the Communion table and beyond. Even within individual churches, steady streams of people move in and out of membership, often due to unhealed wounds. Reconciliation may appear too difficult, even hopeless, and this loss of hope is a fatal blow to the Christian body.

From Outreach Magazine  Free to Thrive: How Your Hurt, Struggles, and Deepest Longings Can Lead to a Fulfilling Life (Zondervan, 2021)

Part of the problem may be in the idea of “church” as an organization rather than an organism. We are a gathering of individual people in a particular place, but we are also mystically united. Communion, in the double sense of that word, marks the body of Christ as both Eucharist and gathered members. Wound healing at the personal, group, societal, and body of Christ level is an organic process more than an organizational one, depending upon a dynamic interrelationship of living beings who are constantly changing, maturing, growing, dying, and starting over. In that process, all are changed—the wounded and the community in relationship with them.

Our bodies don’t react to physical wounds merely with emergency responses or limiting quick fixes. The actual healing process is complex, involving distinct stages and many cell types contributing to the overall work in an orderly, patient progression. Wound healing is described as beautiful and choreographed. Some compare it to a symphony orchestra, an apt description since, all along the way, there are section leaders, sequential movements, rare soloists, stage crew, patrons, publicists, mediators, set designers, and conductors. New works emerge from the collective performance.

Through these four separate stages, wounds are replaced by new structures—blood vessels, skin, and nerves—a truly transformational process. At times, scarring is the best that can be accomplished to close the wound. Not all wounds are survivable. But as we look at how the body is designed to react, we can see a realm of possibilities that offer integration, diversity, support, beauty, and possibility to our own hidden wounds.

Excerpted from Designed to Heal: What the Body Shows Us about Healing Wounds, Repairing Relationships, and Restoring Community by Jennie A. McLaurin and Cymbeline Tancongco Culiat. Copyright ©2021. Used by permission of Tyndale House Publishers, a Division of Tyndale House Ministries. All rights reserved