Home Resources Pursuing Diversity: 3 Advantages of Doing Ministry ‘With,’ Not ‘To’ 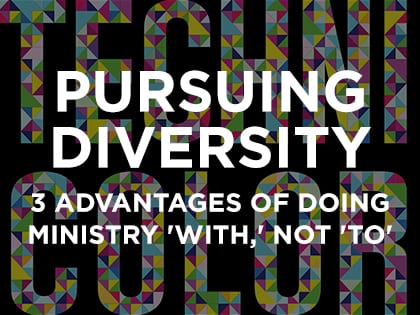 “Paul found ways to strategically connect to every segment of society in order to share the gospel with all people.”

What is the first step for a monocultural church in creating a multiethnic community? Unfortunately, many well-meaning ministries begin a ministry to the various people groups of their locale rather than a ministry with the diverse population of their community. This can be summarized as the difference in being for you and with you. The commitment to be with someone is a far deeper commitment, but worth it. There are three distinct advantages of being with.

The Advantages of Being With

Several years ago I had the opportunity to purchase season tickets for our local professional football team, the Atlanta Falcons. A friend of my son-in-law purchased a new automobile— a KIA. The local dealership was having a promotion of free season tickets with a new car purchase.

The new car owner, not a football fan, was seeking a buyer for his newfound windfall. The tickets were first offered to Mike, my son-in-law, at a ridiculously inexpensive price. When I learned that Mike had declined the offer, I pleaded with him to call back and to purchase the tickets on my behalf. When I studied the team’s home schedule of eight games, I calculated I could attend at least four of them, and finding interested buyers for the other four games at the current cost per ticket seemed very likely.

I have been a professional football fan since childhood, and through the years, I have had the opportunity to attend some games. But now, I was a season ticket holder! I was filled with anticipation to attend my first Falcons game, a Thursday night matchup against legendary quarterback Peyton Manning and the Denver Broncos. I was enthused to the point of childhood giddiness as my wife, Glenda, and I arrived an hour before game time. We made the long trek from the parking lot to the Georgia Dome.

Once inside, we began the search for our seats: Section 338, Row 26, Seats 3 and 4. It is a good thing that we allotted extra time in our schedule. Our journey took us to the upper deck to find our section entrance, and then we began the steep climb to Row 26, the last row inside the stadium. Our seats were in the corner of the end zone, in the upper deck, all the way against the wall of the mammoth seventy-one-thousand-capacity Georgia Dome. Suddenly I realized why a car dealership was giving these tickets away as an incentive!

I settled into my “season ticket” seats to enjoy the game. From the very opening kickoff, a gentleman adjacent to us began a tirade. He was yelling at the referees and criticizing the coaches with occasional vulgar, obscene language. Alas, the first timeout caused a break in the game and every attendee retook their seats for a momentary respite before action resumed. The angry gentleman looked over at my wife and I and asked, “So, did you buy a KIA?”

This man was a Falcon fanatic. He was for the team and he went to the game. Down on the playing surface there were actual Falcon players and coaches. These personnel are with the Falcons. Being with someone requires proximity.

I once heard a story about a family with three young children that begged their parents for a gerbil. The mother was slow to approve the household pet for fear the children would not take on the responsibility of caring for the new family member. She finally acquiesced to the idea, the children picked out their new pet, and they named him Danny.

Soon after Danny’s arrival, as the mother had forewarned, the total burden of the gerbil’s care was placed upon her. After a particularly trying day, the mother exploded with disappointment in her children’s lack of care. “No one cleans up after him; he eats everything in the house; Danny is going to have to go!” declared the mom. The children were devastated!

They began to plead in negotiations with their mother. “What if he eats less? What if we promise to help more?” But the mother was persistent and firm in her resolve: “Danny has got to go!” The children stopped crying and seemed somewhat relieved. The eldest explained, “Ohhhhh, we thought you said ‘Daddy.’ It’s okay if Danny has to leave!”

The marriage vows say, “For better or worse.” Being with someone is a commitment of the heart, no matter the circumstances.

On my Facebook profile I have hundreds of friends. It is a very limited commitment to be a Facebook friend with someone. But the profile also indicates that I’m married. There is a big difference between the degree of promise of a Facebook friend and that of a committed spouse. Glenda and I have been with each other for over thirty-five years. We’ve been together through trials and triumphs, because being with involves a greater promise.

I recall a children’s message illustration when I was young that had a lasting impact on me. The pastor handed each of us two tongue depressors. He asked each of us to take the first one and test our strength to see if we could snap it in two. The boys of the group were quick to flex our muscles and express how easy the assigned task was to complete. However, girls and boys alike were capable of accomplishing the simple request.

The parabolic teaching proceeded when the pastor requested to collect all the remaining tongue depressors, one from each child present. Once gathered, a rubber band was placed around the stack of approximately twenty sticks. The pastor then challenged, “Who is able to break the accumulation of depressors?”

Each individual took a turn to try this feat of strength, but none were able to accomplish the task. The life lesson to be learned is there is strength in numbers and there is power in being with others.

I believe the power of “with” is the lesson of Romans 12. This is the philosophy that informs First Baptist Church Duluth as we develop cross-cultural relationships and introduce ourselves to our multiethnic community. Author and commentator Dr. John Phillips referred to the process of celebrating with people as developing “redemptive friendships.”

It pains me to think of the number of believers that do not associate with one single non-Christian friend. People are fearful of such liaisons. Many will ask, “What will we have to talk about? What if I say the wrong thing?” Adding the increased complexity of crossing a cultural barrier makes these friendships intricately complicated.

How does one initiate a redemptive friendship? Perhaps it’s like the strategy for a game of dominos. The object of dominos is to match the tile pieces of your opponent until one player runs out of dominos and wins the game. The apostle Paul would have been a domino champion, because the game describes the heart of his entire ministry.

Paul found ways to strategically connect to every segment of society in order to share the gospel with all people.

Different cultures celebrate in different ways, but everyone loves a party! Celebrating across cultural lines tears down barriers and opens lines of communication. Jesus was a frequent guest at wedding parties, banquets, and an assortment of other celebratory occasions. Perhaps we should learn from the biblical examples of the apostle Paul and Jesus Himself, and seek ways to celebrate with the various people groups in our local community.

In August 2012, the summer Olympics were in full swing in London. I recall watching the majestic opening ceremonies as the athletes marched into the stadium bearing the flag of their country. This pageantry is beautiful and emotionally moving. As I observed, I pondered, How many countries are currently represented in the membership of First Baptist Church Duluth? And what if we had a parade of flags to show our solidarity around the cause of Jesus Christ?

After a couple of weeks of internal research, we surmised that there were twenty countries represented in our church body. On the Sunday of the closing ceremonies of the Olympic Games, we had our own parade of flags at First Baptist Church as we sang the Newsboys song “He Reigns,” about God’s people from every tribe, tongue, and nation worshipping Him.

As each flag appeared in the procession, it was carried by a proud native of its homeland. By the conclusion, when all twenty flags were at the front of the sanctuary, people were shouting and cheering in praise to the Almighty! Reaction after the service was overwhelmingly positive. Some informed me they had no idea the international complexion of our congregation. Others said they sensed the very presence of heaven as every nation was surrendering to the Lord Jesus Christ. Many felt we had experienced the type of worship described in Revelation 7.

Since that transitional day in the life of our church, the flags have become a permanent fixture in our sanctuary. Placed along the perimeter of our balcony, the number has now grown to thirty-five. The weekly worship guide publication has an explanation for all newcomers: “The 40 flags on display in the Worship Center represent the ‘birth nations’ of our church and Sunday school members. If your flag does not appear, please notify the church office to remedy our error.”

Over these past four years I have observed first-time guests walk the circumference of our sanctuary in search of their native flag. “Is there someone in this fellowship that is from my same area of the world?” Guests have indicated that their flag is omitted and I have responded, “Come be a part of us as the first person from.”

When an international comes for membership at the end of a service, we indicate the presence of their flag or we inform the congregation a new flag is to be presented; God is opening another opportunity for ministry.

As the congregation has become increasingly diverse, we have sought ways to celebrate our cultural diversity and learn from each other. Three annual celebrations now dot our church calendar as community events that aid the church to “rejoice with those who rejoice.”

Mark Hearn is the senior pastor at First Baptist Church in Duluth, Georgia, one of the most diverse counties in America. During his tenure, the church has transformed from a monolithic Anglo-American congregation to a cross-cultural community with members from 37 different countries.