Home Resources How to Attract Young People to Your Church: Be Neighborly 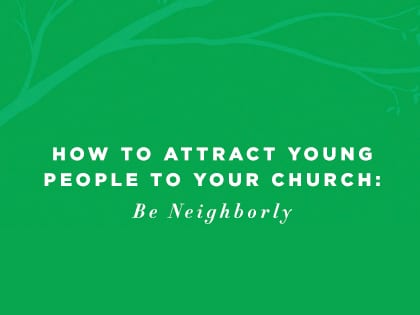 “The church’s primary focus at the festival was not to promote its Sunday service but to make its city a better place.”

College degree freshly in hand, Alexis moved from the Midwest to Washington, DC, convinced that she was going to change the world. Like so many young professionals, she was drawn to our nation’s capital by its high concentration of nonprofit organizations and the chance to influence national and global policy.

“Doing good” was at the top of her to-do list.

During Alexis’s first weekend in town, she heard music coming from a festival in a nearby park and decided to check it out. She strolled through the grass, thrilled to find dozens of community organizations offering opportunities to make a difference.

Alexis was particularly drawn to a simple table with a large banner that read “Foster the City.” “Foster the City’s aim,” the two young adult volunteers shared, “is to reverse the foster care waitlist in our city. We’re going to line up more families who want to adopt than the hundreds in DC’s foster care system who need a home. It’s a huge problem and a huge goal, but we’ve been making steady progress.”

Alexis was ready to sign up and help however she could. She wasn’t in a position to adopt, but she was willing to donate and share the need with others.

As the three continued their conversation, Alexis eventually learned that these volunteers weren’t just part of a nonprofit organization—they were part of a church. The District Church.

This new church plant lived to be “a church for the city”—that was actually its motto. The church coordinated not only Foster the City in DC but also several other social justice initiatives in the surrounding neighborhoods. The more Alexis asked about the activities and overall spirit of the church, the more she felt like this was a church she could imagine joining.

From Outreach Magazine  Chris Sonksen: Saving Your Church From Itself

While finding a church was nowhere on Alexis’s list initially, The District Church leaped to the top because of how it incarnated Jesus in its community.

One year later, when we visited her church, Alexis was deeply involved as a worship leader and small group member. When asked what she loves about her congregation, Alexis reiterated its involvement in the community. “I love that I met these people at a festival,” she said. “I didn’t need to be looking for Jesus or a church to find them. They were out there doing their thing as opposed to a lot of churches that try to get you to come to their events in the church building.”

The church’s primary focus at the festival was not to promote its Sunday service but to make its city a better place.

Alexis continued, “Everyone in our city wants to change the world, but this church makes that tangible in a manner I have never seen before in a church. It teaches you how to apply your faith to the culture so you can interact with the world as God intends.”

The District Church sacrifices neither depth nor theology as it positively engages with culture and makes a difference in the world. Alexis is hooked, and so are hundreds of young professionals and adults. Like many others that grow young, this church loves its neighbors well.

The District Church highlights how churches growing young strive to be the best neighbors, both locally and globally. They wisely maintain a delicate balance as they interact with our culture and world. On the one hand, they do not simply mimic the surrounding culture, indiscriminately patterning their lives and activities after what they see around them. On the other hand, they are not so different or separate from the world that they lose their ability to relate.

A 2016 OUTREACH RESOURCE OF THE YEAR
Category: Church