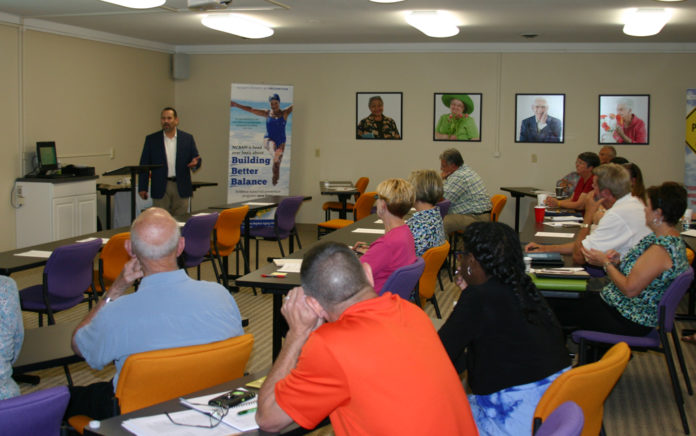 And What Church Leaders Can Do About It

THE CHALLENGE
Seniors need to understand how to protect themselves from being victimized by the growing opioid epidemic.

ONE BIG IDEA
Educate the church on ways the opioid crisis is hurting the elderly and how to help.

Though Matty Ponce-de-Leon’s primary focus is pastoral (he’s the pastor of Arlington First Baptist Church in Jonesville, North Carolina), he also dedicates his time to an additional ministry, one that is personal in nature. A recovering addict and alcoholic, Ponce-de-Leon did not receive Christ until he was in his 16th institution.

“When I came to the saving knowledge of Christ in 2006 at age 29, I found myself with an opportunity to engage other addicts and alcoholics with the hope of the gospel,” he says. “As an addict, I was aware that anyone in my blast radius was affected, but what I found when I entered pastoral ministry is that there really is no demographic that’s not affected by addiction.”

And that includes the elderly. Last fall, Ponce-de-Leon partnered with the North Carolina Baptist Aging Ministry (NCBAM) to host an opioid awareness workshop for leaders of ministries to seniors.

“I had discovered how much older adults are victimized by their grown children as a result of the opioid epidemic,” says Ponce-de-Leon. What this looks like varies, but often it is addicted adult children stealing their elderly parents’ pills or withholding their folks from hospice care in order to hoard their prescription medication.

“The choices that seniors need to make regarding their adult children who are addicts are generally not challenges of logic; they are challenges of the heart,” he explains. “Intellectually, most people understand not to give drug addicts money, share medicines or enable poor behavior and choices. It is, however, because of the desperation of the heart that parents of addicts, no matter the age of their children, will hope that this time they really did just need that $25 for gas.”

The most effective way seniors can protect themselves from addicts who want to steal from them (including family members) is to properly dispose of medications, lock up medications and use caution when discussing prescriptions. Seniors must also be mindful about to whom they grant financial responsibilities, medical power of attorney and end-of-life decisions.

In addition, ministry leaders need to do their part to recognize when older adults need help. Warning flags may include a lack of communication, detachment or changes in behavior.

“One of the greatest dangers for individuals in the body of Christ, and, unfortunately, one of the most common practices, is to detach when challenges arise,” says Ponce-de-Leon. “Proactivity from adult ministry leaders to head off potential church detachment before it even begins is far easier than reintegration and assimilation, especially among seniors.”

A parallel epidemic in this country is the rising number of seniors who are raising their grandchildren because their child is an addict.

“The raising of grandchildren costs in ways not often initially considered,” says Ponce-de-Leon, including financial implications on fixed incomes, the utilization of savings for childcare and the physical toll it takes on seniors. The most heartbreaking loss, however, is that of the joyful opportunity to grandparent.

“Instead of being the steady hand of comfort, seasoned voice of experience and dispenser of grace that grandparents often are, they instead assume the parenting roles of structure and discipline,” says Ponce-de-Leon. “This is supposed to be a special time of life. God’s got his plan and design to affect children’s lives in a unique way. But seniors are being robbed of this blessing.”

Hosting this opioid awareness workshop was important to Ponce-de-Leon as he feels that churches should do their part to address the opioid epidemic.

“When it comes to engaging addiction with the gospel—because Jesus is the answer—there has been a flurry of recent activity in launching new initiatives, advancing conversation and promoting existing Christ-centered recovery,” he says. “The application of basic tenets of Christian discipleship and personal spiritual formation is being approached with a new vigor. In this current climate of need and interest, many effective voices and discipleship approaches are gaining traction.”

One reason there is a high level of interest in helping older adults within the church with regard to the opioid epidemic is because they are so often victims, plus they often make up a large portion of active church members. However, Ponce-de-Leon has not seen an abundance of teaching and training available on the opioid epidemic for this large demographic.

“One of the greatest church responsibilities in helping seniors dealing with opioid addiction in their adult children is to create environments where the issue can be openly discussed,” he says, noting that we live in a culture in which we so deeply identify failure and success in life with how our children turn out.

“The embarrassment of having addicted adult children can either be promoted or squashed depending on the environment within the church,” says Ponce-de-Leon. “In this respect, the sanctuary of the church should be just that—a sanctuary where all hurts and bewilderments can be brought, prayed over as a priority, and then engaged.”