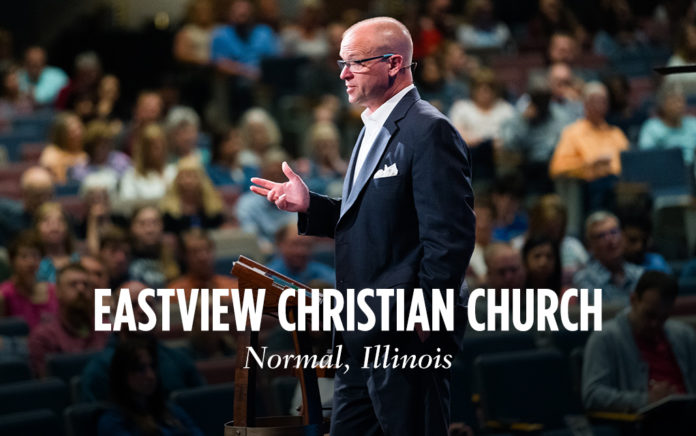 The leaders at Eastview Christian Church in Normal, Illinois, believe that everyone can make an impact on this world, and they wanted to rally their congregation behind this idea.

“We gathered together 1,500 of our volunteers and hosted our own leadership summit,” says Senior Pastor Mike Baker. “We called it the Influence Conference because not everyone thinks of themselves as a leader, but we are all influencers. We brought in speakers and showed our volunteers how to impact our community for Christ. We taught them to start small and just love people.”

At Eastview, servanthood is the best tool for evangelism. In 2018, they opened a satellite location in nearby Bloomington, which has changed the perception of their church in the community.

“People see us as more a part of the Bloomington-Normal community now,” Baker says. “We’ve always been an outwardly focused church, but our outreach is more visible now. We have adopted the elementary schools in the area, and we have partnerships with all of the social agencies in town. People see us helping, which has opened doors for us.”

Bloomington-Normal is a community of 130,000 people. “We have two universities as well as State Farm Insurance Company’s headquarters, which employs 15,000 people,” Baker says. “The community is becoming more diverse, and I’m pleased that our church is representative of that change.”

Baker has learned a lot in the age of COVID-19. “It’s so easy to be swayed by other people,” he says. “As a pastor, I have to be sure of my calling. I’ve found that I’m more confident in God’s plan than in my own leadership, and I need to lean into him all the more.”

The virus has taught Baker that his church can reach people, no matter what. One unique mode they’ve used is an after-service chat group.

“People can dial in to a Zoom call after the service concludes for extra teaching,” Baker says. “They can talk about what they learned, ask questions and fellowship with one another. It’s a way to give people that after-church ‘foyer time’ they need.”

One person who has come to Eastview since the start of the pandemic is David Linley, a combat veteran who suffers from PTSD. “I was walking in a park one day, and I saw signs for Eastview stuck in the grass,” he says. “I was going through a hard time in my life, and I wanted to connect with a church, so I watched online that weekend.”

The service featured contemporary music, which Linley liked. “I felt very comfortable, even though I wasn’t actually there,” he says. He joined the Zoom call after the service. “They welcomed me into the conversation, even though I was a stranger to them. I could tell they trusted one another, and that meant a lot to me.”

During that call, Linley found out about a socially distant baptism event the church was holding outside. “I felt compelled to go,” he says. “Pastor Mike and Pastor Nicki [Green, pastor of involvement] welcomed me and even invited me to eat dinner with them. I could see the sincerity in everything they were doing. They actually cared about me.”

At the baptism service, Linley met another veteran, who was also wounded during his service. “It was great to talk with someone with experiences similar to mine,” he says. “He told me that the church had really helped him a lot.”

Eastview has a support group for veterans, and Linley can’t wait to go. “Dealing with PTSD isn’t something you should do on your own,” he says. “We all need help. I’m so glad I saw that sign for the church. It was just yet another sign that God is with me.”