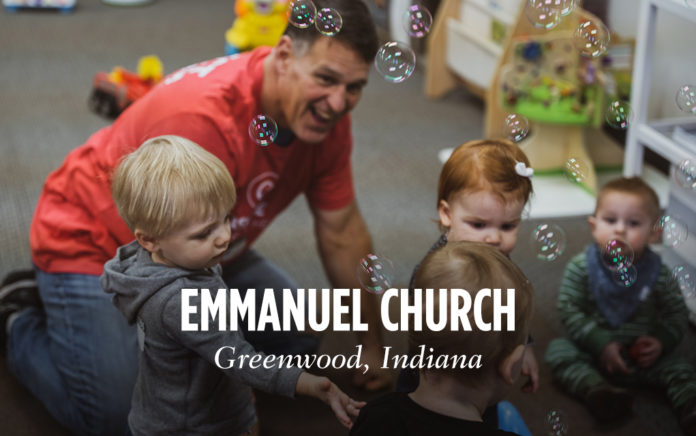 A new perspective leads to surprising growth at Indiana church.

Emmanuel Church in Greenwood, Indiana, began in 1977 with 17 people, but grew quickly and in 2006 averaged 2,100 people before a major transition occurred.

After serving as the high school pastor for over five years, Senior Pastor Danny Anderson took the lead and initiated changes that prompted a major plummet in attendance.

“The church struggled initially because we transitioned from a traditional church to a more seeker-friendly and culturally relevant church,” Anderson says, noting their numbers dropped to as low as 900 following the shift in vision.

“It was inward-focused—like a country club you paid your tithes to and then you get to vote on what you’d like to see in the church,” he explains. “We flipped that and said we’re going to exist for people who don’t yet come here—people in the community who are far from God.”

This new perspective meant a new approach. It meant offering time and resources serving local and global ministries. It meant that every week at Emmanuel there is an opportunity for attendees to place their faith in Christ.

Since the transition, days like Easter, Christmas and Mother’s Day have become more about invitation and promotion and less about church people. During natural times on the calendar when unchurched people are more likely to attend, they have a normal service but work hard to make sure new people attend.

“We don’t really grow incrementally,” Anderson said. “We grow through big days. We tell our people we want them to invite every week, but especially on those weekends.”

The vision of “Come to Christ, Grow in Christ” marked a change in the preaching style to one Anderson describes as down-to-earth, and the type of preaching that doesn’t “preach at people or make them feel condemned, but rather, hits them where they’re living.” Tackling topics like divorce, pornography, anxiety and depression in a conversational tone has allowed people to let their guard down, according to Anderson.

The teaching is from Scripture, says Krystal Loomis, Emmanuel member and volunteer in the children’s ministry. “But it’s not just pounding and throwing Bible darts, making you feel guilty.”

Loomis has been at Emmanuel more than 10 years and says that the relentless pursuit of people is a huge factor in the church’s growth. “It’s a welcoming atmosphere from the moment you walk in. There’s always a smiling face trying to get you some coffee and get you where you need to go. People that come for the first time feel they are special.”

An occupational therapist, Loomis works in the church’s “support room,” an alternate space for kids who have a hard time with bright lights, loud noises or being around too many people at once.

“Everyone has the right to hear about Jesus in their own way,” Loomis says, summing up much about the vision of the church.

But establishing that vision wasn’t easy, according to Anderson, who says some of the necessary steps were not for the faint-hearted. Growth requires a 100% commitment to the sacrifices necessary.

“So many pastors would love to grow their church,” Anderson says, “but at the end of the day, you have to fire certain people, and that’s going to make 10 families leave. You have to change the music, and that’s 10 more families. And when you change your culture, 15 more families are going to go. It’s much easier not to do anything and keep the status quo where everyone’s happy.

From Outreach Magazine  Try This: Host a Business Networking Group

“I didn’t sign up for that—to keep people happy,” Anderson says. “I signed up to reach people for the kingdom.”

It seems the sacrifices are paying off at the church that now has four campuses, a thriving online presence and many people who have experienced life change.

“Over time, people saw that their friends were coming to Christ and people who didn’t like coming to church liked it,” Anderson says. “We’ve seen literally thousands of people place their faith in Jesus Christ.”