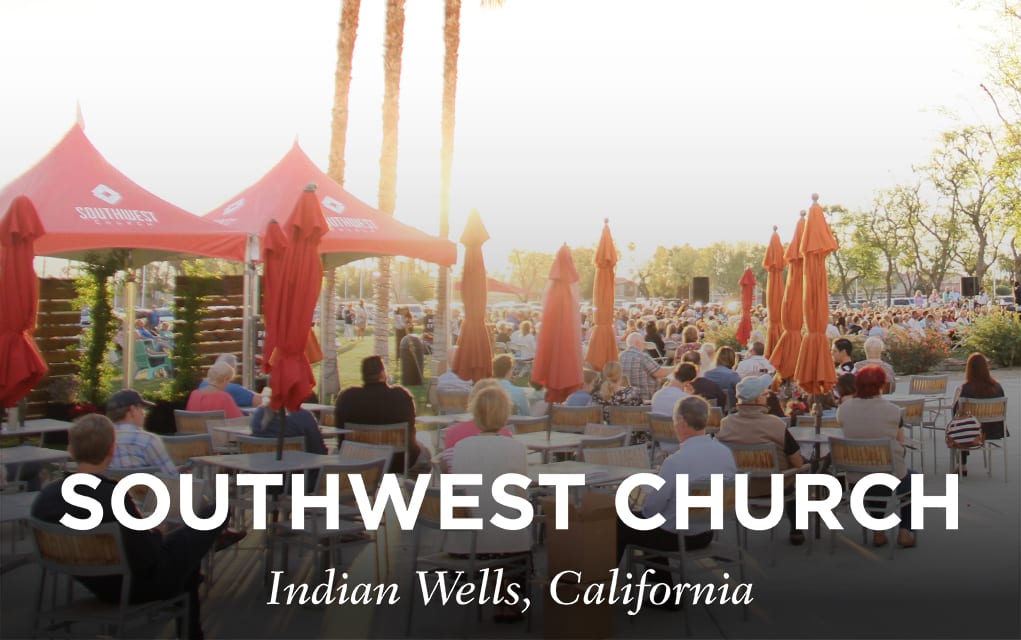 “It’s electric. Our people are just so excited about their church,” says Senior Pastor Ricky Jenkins of Southwest Church. “And to their great credit, they’ve extended excitement for me as well. I can’t go anywhere in this town without someone saying, ‘Hey, aren’t you the pastor of Southwest?’”

Southwest Church is located in Indian Wells, just 15 miles from Palm Springs in the Coachella Valley, a unique mix of some of the wealthiest people in the world and poorer agricultural communities. “The Holy Spirit is just wise and kind to erect a Bible-believing, Jesus-loving church in the center that can appeal to the affluent as well as to the low-income guy just trying to figure out life.”

The church was planted just over 40 years ago, organized by the Evangelical Free Church of America. At that time, the region was beginning to see growth as it moved out of the shadow of being a desert playground for the rich. Cities like Palm Desert, Indio and Indian Wells sprung up as places for young families to find affordable housing in pricy Southern California. Jenkins says with a chuckle, “It’s still one of the last bastions in South California where you can be a mechanic or a school teacher and still afford a house.”

The church went through a turbulent season of high-profile staff turnover, which could have split or destroyed the congregation, but Jenkins credits a strong core of dedicated members who continue to stand behind their church.

One example is ministry leader Sharon Claytor, who affirms, “For almost three decades the Lord has used the body and the ministry of Southwest Church to strengthen my faith, encourage my heart and clarify my calling. In trial and triumph, in laughter and tears, Southwest Church has been my home.”

Jenkins came on staff in January. He sees two groups visiting on the weekends. “A lot of folks are unchurched and just hearing about things. Others are folks who attended the church back in the day and are coming back.”

The result of the buzz has been seen in more than 500 professions of faith just since he took the position. Jenkins brings a diversity to this church that was once primarily retirees. “I grew up in the black church tradition, but have mostly pastored in multiethnic evangelical settings.”

Jenkins sees Southwest becoming more diverse and growing like the community around them. One huge weekend for the renewed church was this past Easter when 11,000 people attended, a record high attendance.

The service started with a clip of Billy Graham declaring, “He is alive!” and ended with a call for decision. Jenkins says one man who was watching from the hallway was weeping and raising his hand. “One of our former staff members sees this man, goes to find another staff member, and they lead him to Christ right there in the hallway,” he says.

It’s clear that something is happening, and Jenkins is convinced that this is just the beginning. He’s certain that the keys to Southwest’s future are in strengthening community partnerships, starting an active discipleship training that includes other area churches and developing leaders.

“My dream, before the Lord calls me home, is to launch 1,000 leaders,” Jenkins says. He wants to create an internship program for every level of church leadership. Churches from around the world would send people for a three-year period, and those people would train and equip the next generation of leaders.

People are coming to see what’s new, but they stay for something else. Dolores Uribe is an educator, wife and mother. “A year ago, I hit rock bottom. I was dealing with my father’s death and marital problems. I walked into Southwest a broken person only to find the most compassionate and caring group of men and women who made me feel loved. Today, I stand strong living in my Lord’s peace with the support of my Southwest family.”

From Outreach Magazine  Scot McKnight: The Life-Giving Breath of the Spirit