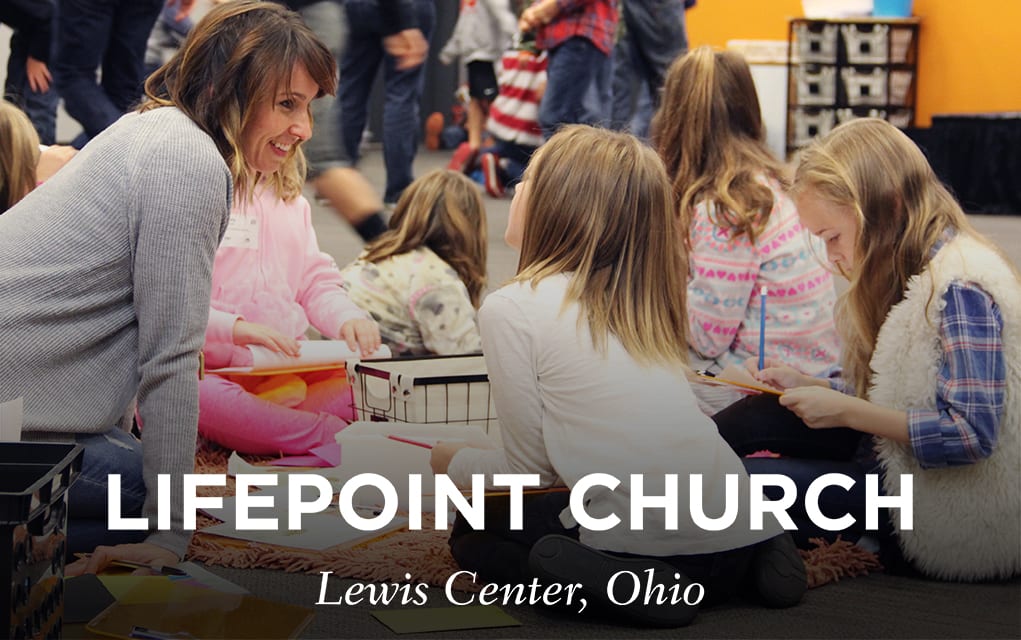 Leaders at Lifepoint Church in Lewis Center, Ohio, are on a mission to see 100 percent involvement in their small group structure. Known as Lifegroups, these gatherings of 12 to 14 people meet once a week for Bible study, prayer and friendship.

“Lifegroups are what we do,” says Lead Pastor Dean Fulks. “We do weekends and we have Lifegroups. Community is our discipleship process.”

From its beginning as a single group in 2004, the church has focused on growing and multiplying groups—and training leaders to do the same. Today about 90 percent of attendees are involved in gatherings that meet in three “terms” a year, with gaps between for refreshing and resetting. Over the years, certain geographic locations had multiple Lifegroups, and church leaders have sent out 400 people to start three new campuses that Fulks describes as “somewhere between multisite and multicampus.”

According to Fulks, developing and sending their best people has resulted in growing and thriving but also created a need for excellent leadership development. “You have to constantly be looking for new leaders to replace the leaders that you are sending. You have to disciple people to replace the culture and DNA of discipleship. When we send a group, the folks that go are the most missional, the most active and the most aggressive wanting to reach new people in their community.”

Leaders of Lifegroups are given a great deal of autonomy concerning the direction and format of their groups. And the particulars of worship, Bible study, prayer, baptisms and communion are up to each leader, but the system is designed to let leaders be who God has designed them to be. Some are great teachers that lead group study and discussion, while others are solid administrators that delegate that responsibility to someone more gifted in that area.

“If there is a highway with 10 lanes, pick a lane, as long as we’re all going in the same direction,” says Executive Pastor Troy Palermo, who describes their system as “rigid flexibility” with a high value on theology, but more importantly, an expectation that group leaders be good shepherds.

“If people are in a place where they are loved, cared about and are known and know others well, they are going to invite their friends,” Palermo says.

“We tell our leaders that if they will do two things, they are hitting the target. If they help people connect relationally and take the next step in their spiritual journey, they’ve nailed it,” Fultz says. “We want our leaders to sense God’s activity in the lives of the folks in their groups and help them take the next step—whatever that looks like.”

He says a focus on groups and multiplication allows greater ministry. Each group does at least one service project per term, from serving hot meals at the local mission to stuffing backpacks for underresourced kids. With 135 groups meeting three terms a year, Fulks notes the average is more than one service project done each day of the year.

“We can do way more like an army when we are split into battalions in different areas than we can trying to mobilize everybody to one spot on one day,” he says.

When Lifepoint began 14 years ago, demographic studies revealed that only 3 percent of people in their county attended an evangelical church. “It was way more like a foreign mission field than we realized,” Fultz says. “We wanted to see that number shift.”

Three years ago a new study came out that showed the 3 percent had become 7 percent, a figure Lifepoint people find both encouraging and discouraging.

“We’ve doubled, but we’ve got a long way to go,” Fultz says.