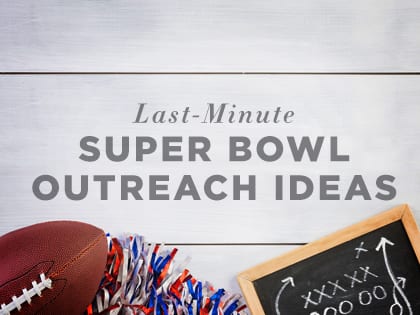 No, it’s not too late for your church to use the Super Bowl for outreach. Check out some of these last-minute ideas.

According to a recent survey from Lifeway Reasearch, about 68 percent of churches in the U.S. have a gathering of some kind on Sunday nights. Of those, about 59 percent say they will not cancel or change the event because of the Super Bowl. Only 5 percent of those surveyed said that they will flat out cancel church that Sunday. About 24 percent said that they will include watching the game as part of their Sunday evening plans and the remaining said that they will adjust their plans in some way.

Some would argue that the church should not cave in to social pressure, and have nothing to do with the “big game.” But is there a better way to look at this media event that will be seen by about 115 million viewers around the country? Is it possible that churches can use the Super Bowl as an outreach event that will have an impact on someone who might normally never set foot in church? There are some simple tools that your church can use to bring the gospel into a Super Bowl event.

No Bait and Switch

Let me begin by making it clear that I do not believe in getting people to your church, or into your home, and surprising them. I think they should know, up front, that you will be watching the game. But let them know that you will take some time to watch a testimony video. Let them know when that will take place—for example, at halftime or after the game. Invite friends and co-workers with the understanding that this is a church event.

You might be surprised to find that some people are actually interested in that. They might welcome a “nonthreatening” environment to learn more about God and mix with some “church people.”

A Super Bowl party can certainly be a great time to show off the church’s hospitality, so don’t hold that hostage, either. Don’t say, “We’ll let you have some snacks after you fill out a visitor card.” Instead, give the party an open, welcoming atmosphere, especially for someone who has never been to your church before. Bring out the best food and desserts. Make sure that you engage them in conversation as well. Don’t separate newcomers from the regulars.

Don’t oversell the event, either. Don’t tell your guests, “Church is like this every Sunday!” Maybe the family environment is present, and maybe you have great snacks, but make it clear that this is a special event. You want them to check out church, but ultimately that’s not the point. You want to introduce people to Jesus.

From Outreach Magazine  Who's the Evangelism Champion in Your Church?

Perhaps the best method to reach people with the gospel is with a personal testimony. There is nothing like someone sharing how Christ has transformed them and changed their life. Since Super Bowl is about football, having a player, or former player, tell their story is a great way to engage people with the gospel.

Do you have someone in your church who has been there? Is there a player who has a great testimony who you can get to speak? That would be the best connection. How many people might come to a Super Bowl gathering at your church if they knew an NFL pro was going to speak? You might be surprised—someone might be looking for a little nudge to get them to step up and share. They don’t have to be slick and polished. They just have to have a relationship with Christ that is real. In fact, slick and polished may actually turn some people away.

But, what if your church or community doesn’t have a professional athlete who can share? Or you can’t get someone on such short notice? Fortunately, there are a lot of resources online that you can utilize for this very purpose. Here are a few choices:

Football Sunday (footballsunday.com). NFL player Benjamin Watson is hosting this year’s video that will include several active players, including some who will be playing on Sunday. The resources are available on Life.Church’s open network. The video and resources are free, but you’ll need to register.

Men ReWired (menrewired.com). Also free, this is a video from this men’s ministry resource page. The program is called “ReWired Half-Time Adjustment.” It features former players Abraham Wright and Kenyatta Wright. Look in the video section of the web site.

I Am Second (iamsecond.com). This web site is well known for its testimony videos of people in the white chair. If you search “football,” you’ll get about 10 testimonies, including former coach Tony Dungy who has been outspoken about his faith. The videos are free for church use, but they are short, so you may want to use a couple.

When is the best time to have the testimony, or play the video, at your Super Bowl party? Most of the produced programs are made to fit into halftime. Halftime is extended for the Super Bowl and lasts just about 15 minutes. This year that may be a good option because the headliner for the halftime show is Lady Gaga, who is known to give some “less than family-friendly” performances.

Remember that it’s not too late to get the outreach going. You can use one of the downloadable video options mentioned and connect with your church via social media. If you are already planning a get-together, encourage your group to invite someone who doesn’t normally go to church. But first, pray and ask God who he might touch this year though a Super Bowl outreach.