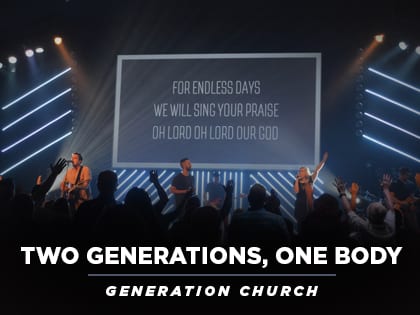 The transition of a ministry from father to son is often a challenge, and sometimes a complete disaster. But at Generation Church in the Phoenix, Arizona, suburb of Mesa, father and son pastors Randy and Ryan Visconti are making it work.

Randy began pastoring the church in 1999, when it was called Celebration Church. Ryan was raised in the church as it grew to more than 500 in attendance by 2006. In 2007, Ryan joined the Army, just as church attendance was beginning to plateau. While serving in Iraq, he felt God’s call to full-time ministry, and, after being discharged, accepted his father’s call back to Arizona.

The church’s decline caused Randy to think about a new vision and a new direction. Ryan says, “I give my dad a lot of credit for that season. Just being able to take a step back and say, ‘It’s not about me. It’s about doing whatever it takes to reach people.’” At first, the plan was for Randy and Ryan to be co-pastors, allowing Ryan to drive the vision and direction of the church. Ultimately, this new arrangement led to a complete relaunch of the church with new name: In 2014, Celebration Church became Generation Church.

The church’s goal was for no one to get lost in the transition. Randy began leading a Sunday morning service called “Traditions” for people who preferred a traditional style of worship. Churchgoers can also attend the “Live” service, headed up by Ryan. “Live” features a more contemporary worship setting and feel.

Ryan says that no one was sure whether or not this dual-service strategy would work.

“It was either going to be an epic failure or an epic success,” Ryan recalls. “Another local pastor, a megachurch pastor, said that it would never work.”

But it is working. Generation Church is currently growing and thriving. More than 450 people have been baptized since 2014.

Reaching the lost is both pastors’ primary motivation. Ryan says this unique strategy is just the right fit for the Mesa community, with its high population of retirees.

“If we didn’t have something that targeted the baby boomers who are retired, then we would be really neglecting our community and neglecting an opportunity to reach people,” Ryan says.

One reason for the church’s growth, according to Ryan, is intentionally maintaining unity among the two service demographics.

Of course, the real measure of a church’s success is found in the lives that are changed. “My life has changed through Jesus Christ, and Generation Church showed me the way to walk with him,” says Patrick Jones, who has attended the church since 2014. “I no longer do the things I used to do, and I no longer am the person I used to be. Jesus has made me new again. I’m blessed that I can call Generation Church my home and family.”

Ashley Warford, another member, came from a dark background and found light through the church’s teachings.

“I really believe that God brought me to Arizona for Generation,” she says. “I was lost and dead on the streets. I could have ended up anywhere. My story is insane, scary and sometimes unbelievable. God saved me and I am so encouraged by what we are doing in the East Valley.”

With its unique model, Generation Church truly is reaching the lost. Ryan says the campus is full of new believers from each generation who find a place where they can feel loved and accepted, no matter their background.

“They become genuinely excited about what God has done in their life, and they, in turn, invite family and friends,” Ryan says.