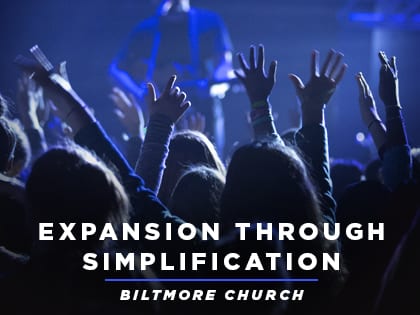 No. 77 Fastest-Growing: Biltmore Church in North Carolina Seeks to Be as Simple as a Large Church Can Be

Carl Setterlind of Biltmore Church in Arden, North Carolina, has witnessed the evolution of worship music first-hand. He recalls the church’s days of enormous choirs, wild stage shows with 25- to 40-member rock bands, fog, brass and keyboards, and every other trend that has shown up in Sunday services across the U.S. over the past few decades.

“I’ve been through so many transitions, it’s incredible,” Setterlind says.

Setterlind currently serves as the worship pastor at the 128-year-old church, where he’s been involved in music since the early 1990s. When you have a church that has been around for decades, Setterlind says “the desire to progress” is vital. And for Biltmore Church, simplification has been a big part of that change across every aspect of the church.

Lead Pastor Bruce Frank agrees, and he describes his overall church strategy as “a philosophical shift from the old-school model of heavy, heavy programming” and straying from practices that are “expensive, complex and take people from the community and isolate them inside the church.”

Frank moved from Houston, Texas, to western North Carolina in 2008. Under his leadership at Biltmore Baptist, the church has expanded to five total campuses in just eight years.

“We had to re-emphasize the point of, ‘What is the best way to do ministry here?’” Frank says. “We had to become as simple as large church could be.”

This has included maintaining a reasonable number of staff members, Frank says, explaining that the church has slightly less employees than it did when it was more than half its current size.

“If we just preach the gospel and love on this city, things are going to happen,” Frank says. “The culture changes so quickly. And the culture is our mission field, not our enemy. We can’t bring the drawbridge up and wait for Jesus to return.”

The church’s surrounding community has a “tremendous diversity in terms of worldview,” Frank says. Yet for the longest time, a sense of legalism was prevalent in the congregation.

“I don’t think that a conservative, Bible-teaching church was viewed as a particular blessing or as a partner to the community,” Frank says. “People just thought, ‘Here’s what they’re against.’ The church had to understand the difference between a biblical conviction and a personal preference.”

That’s why Frank helped the church create a new mission plan, which includes serving lower-income schools in the county and helping to renovate playgrounds and provide school supplies for those in need. The relationship between Biltmore Baptist and the local public schools evolved from there.

Recently, Frank heard an anecdote about the school superintendent meeting a group of area principals. When asked how to remedy a dire issue facing one school, the superintendent replied: “If I were you, I’d start with Biltmore Baptist.”