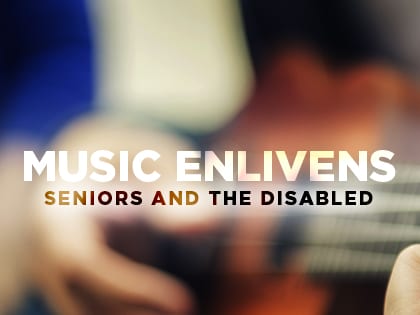 Charlotte Chambers stays quiet—or talks about nothing much to no one in particular—while in the “throes of dementia,” according to her daughter, Eileen Rosenberg. “It’s like the lights have gone out.”

But then Don Morman strums his guitar, and Chambers’ eyes light up. She smiles, sings and taps her knee to Elvis’ “Can’t Help Falling in Love.”

“It’s like someone being resurrected from the dead,” Rosenberg says.

“It kind of transports them and takes them out of their troubles for a while,” says Don’s wife, Marcia Morman, who leads the Music Ministry of Care at St. Paul of the Cross Catholic Church. About 3,000 attend the church in Park Ridge, Illinois, a Chicago suburb.

Marcia was unsure how to serve her church. She had two years to give in return for the tuition assistance she received while learning lay leadership at a university. But the singer and mandolin player saw music cheer up her 93-year-old mother, and she saw Don, retired, play and sing at home—sans an audience.

In 2014, the Mormans began bringing their mandolin, guitar and Don’s repertoire of songs to disadvantaged patients, including those at a home for developmentally disabled adults.

Friends ask them to play for relatives, or nursing home staff request music for many patients.

But Marcia first asks by phone: What kind of music do they like?

For an audience of one, she’ll ask where they grew up, worked and what they did for enjoyment. “Because my husband knows songs for everything,” she says.

“We figured that he probably knows about 600 songs,” Marcia says.

The longest they play is about 45 minutes, but patients’ preferences determine their length of stay, according to Marcia.

“Sad oldies,” such as the country song “Blue Eyes Crying in the Rain,” bring patients to tears.

But sometimes it’s the Mormans who are moved. Marcia recalls one older woman who “was pretty much dying.”

Her family gathered around, but she stayed quiet and withdrawn with her eyes shut even during the music.

“I don’t know how long it had been since she had spoken,” Marcia says.

Yet before Marcia left, the woman opened her eyes, saying, “Thank you and bless you.”

“They have a transformative effect,” Rosenberg says of the Mormans.

“I just like knowing that we’re giving them an experience that’s happier than their normal, everyday life,” Marcia says.