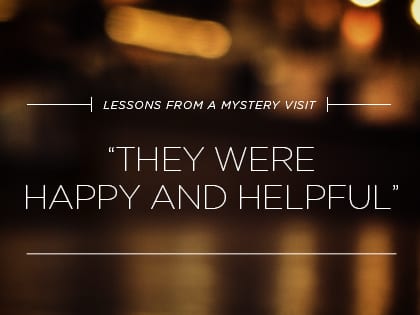 What was it like when you entered the building?
The greeters at the front doors welcomed me. The church was busy and after the initial “hello,” the people squeezed by one another. When a member of the church approached me, they were happy and helpful. I found my own way around, but it was due to the mass number of people and not a lack of trying or caring on the part of the church.
****

Was it obvious where the children’s ministry was located and that it was clean, secure and well-staffed?
Many children attended the service, with one or two crying babies being ushered out by parents. I did not notice a specific room devoted to children, but the church was large and had several floors. Children laughed and chased one another after the service. The parents did not seem worried. The majority of the congregation consisted of older people and families. I would have no problem leaving a child in the company of these people, and the child would not only have other children to play with, but obviously loving people to supervise.
****

Did you observe anything that would lead you to believe that the church values diversity?
The church offered traditional worship that was definitely a well-practiced production. I did not see single people in their 30s or younger and do not remember any ethnicity other than Caucasian. They had ample examples of ways the church helped the community—offering a weekly soup kitchen, donations around the holidays for specific members of the homeless community, and the coffee exchange. They also presented several scholarships for students to travel throughout Europe and learn more about the history of the Christian religion.
****

Describe the service.
The music was superb. A quartet welcomed the congregation with beautiful classical music. Once the service began, the quartet joined the rest of the musicians on a second level balcony that was behind the congregation. The music was traditional, but engaging. The orchestra performed with melodies that would rise and fall with many different dynamics. One of the pastors had a beautiful voice and led the choir in song. As a lover of music, I really appreciated the dedication required for a production that size. However, a younger person might think the music was antiquated.

The formal greeting was achieved through humor, people laughed and it was an effective way to break the ice and unite everyone. The message about preparing yourself was not incredibly appealing as I do not believe a lot of Christianity. The focus pertained to historical fact; I am more intrigued by the philosophical side of religion. The concept was well thought out and presented in an understandable way, but again not relevant to my life.

The pastor was not captivating as a public speaker—not to say that he was nervous, just that he was monotone and did not include much inflection in his oration. Several speakers dressed as members of the cloth and one woman dressed as an attendee who read Bible verses. I enjoyed the rotation of people. It gave the service a sense of progression and also helped keep my attention focused on what was happening at the altar. The church was pretty, so my attention wandered from the speaker to examining the art and architecture of the building.
****

Overall, how friendly would you say the church was to you during your visit?
I felt welcomed even though I hardly spoke a word to anyone. This church is in the heart of a city, where people are used to seeing strangers. It is socially acceptable to merely acknowledge a person that you don’t know in the city, whereas in the country it is so rare to see someone you don’t know, that one is more curious. This is especially so in a place of worship. Even though I was not approached by anyone at the service in the city, they had welcoming smiles.
*****

Would you return to the church?
The music would draw me to this church, and has made me curious about the other large, older churches in the area. I cannot remember ever hearing Christian music played with such skill in my life. I was truly moved several times. The lack of diversity in race and economic status is a drawback, but the people were all smiling and friendly. This church would mainly attract middle-class, Caucasian families from the area. People may travel from farther away in the city to attend this particular church due to its many beautiful features.
****

Was the nearby community aware of the church?
The clerk at a convenience store immediately directed me toward the church, but his directions were a bit off. I know because I live a couple of blocks from the area. He recognized the name and pointed in the correct direction, which is impressive because there are a multitude of churches in the downtown area.

How was the seating?
The seating was extensive. It filled out evenly in the front and tapered off towards the back. The wooden pews were cushioned with enough space between each one to comfortably sit. However, if someone wanted to pass, it was necessary to either standup and leave the pew to allow the other person to pass or to put one’s foot on the pew. The people sat close together with few gaps. During worship, it was difficult differentiating the congregation from the choir.

How recognizable was the church signage?
I circled the blocks a few times looking for a place to park and did not notice a sign that indicated the service times. Neither did they have clear parking signs. I relied on my knowledge of the area. After parking, I followed a group of people who were obviously headed toward the church. Since they entered into an unmarked side door, I walked around to the main door. No sign indicated that the door was the main one, but its red color and constant use by other members of the congregation made me think it was the front door. With a large crowd of people at the church, I was a little confused on where to proceed. I saw a coat rack. As I hung my coat, I saw signs placed throughout the hallways directing one to where they needed to go.

How was the post service atmosphere?
After the service, a large amount of people were in the foyer of the church. I poked around as I re-oriented myself and found the place where I hung my coat. I leaned against the wall inspecting the surroundings while watching people pass by. In a side room, a small line of people formed. I joined them after noticing they were serving coffee and cookies. People smiled at me, but no one actually approached me to talk. Many small cliques had formed with people happily chatting with one another. I did not feel scorned by the lack of communications.

How would you rate the information resources?
Aside from the flyer handed to me upon entering the church, they had little information for people attending the church for the first time. If I took the initiative to ask all of the questions, I would have learned more. Their website was well put together and easy to navigate. They have a calendar of events, times of worship and even biblical quotes under the “prepare for worship” section that help get a head start on thinking about the day’s service. I saw an information card to fill out, but it was unclear where to turn it in.

What is your overall impression?
The church was beautiful inside and out. The rooms were well maintained with clean bathrooms. They decorated it well and it made me excited for the upcoming holidays. The lack of diversity was obvious, but this area of the city is predominantly Caucasian. I would make material more readily available for first-time visitors. It was fun exploring the different tables and rooms that were easily accessible. Overall, it was a good experience. The old church coupled with the powerful music definitely uplifted my spirits and made for a good Sunday.

An unchurched person reports on an unannounced visit to a local church. Adapted from a report provided by Faith Perceptions, which has evaluated more than 3,500 worship services across the United States. Visit FaithPerceptions.com.