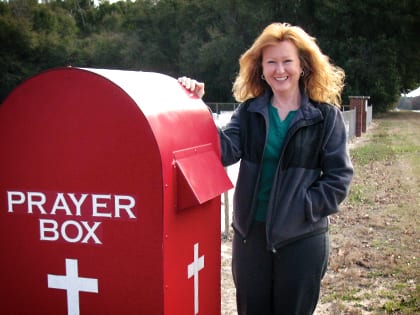 Rev. Chance Ward held a child’s note with a heavy message: Would they pray that her family gets money to buy enough food to eat?

“It bothers me,” Ruth Pauley says of the letter, signed only with the girl’s first name.

Notes, sometimes scrawled on the back of Walmart receipts or torn envelopes, steadily land in Goshen United Methodist Church’s prayer box along Georgia Highway 21 in Rincon.

“You can’t miss it,” Ward says of the shoulder-high, bright red receptacle.

Pauley, a member at Goshen, retrieves the notes and prays before giving the concerns to Ward, who also prays.

Some Sundays, Ward tells Goshen’s 105 congregants about the needs, and they pray, too.

“In turn, you get a little more compassion,” Pauley says.

Ward also gets a sense of the community’s struggles, and conversation starters from outsiders: Do people actually use the box?

“There are probably a lot of positives that come out if it,” he says.

The box has stood roadside since 2000 after a former Goshen pastor started the ministry.

According to Ward, it lets locals, perhaps uncomfortable in church, comfortably voice their concerns.

“To know that there’s someone out there that’s lifting me up in prayer, that’s encouraging,” he says.