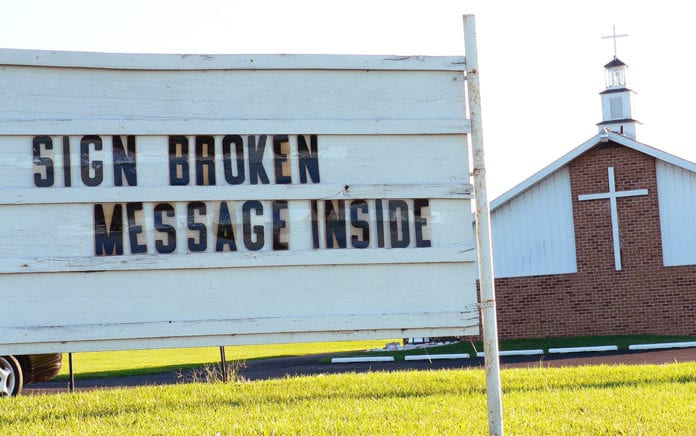 A new church sign is not going to reverse the decline in attendance.

I recently heard a pastor compliment another church for being a church that was actually moving forward, being “alive” and “contemporary,” brushing away the ecclesiastical cobwebs and making a kingdom impact. Leaning in to hear the breakthrough, he said: “What was it, 13 years ago? Why, they were the first church in the county to have a digital sign out front!”

It would be easy to hear such a statement and snicker.

I could imagine that small church sacrificing to invest in the digital sign. Discussing it at business meetings. Experiencing growing excitement when installation began, and coming that first Sunday after its launch expecting new attenders and a fresh wind of the Spirit. I could imagine them feeling proud that their church was actually doing something; that life had come to their sleepy enterprise. Even something “modern.”

Again, I don’t write a single word of that in condescension.

I write it as a lament.

We all know the sign did next to nothing. There isn’t a sign in the world that could—not in the face of the American church’s situation.

There are many reasons that could be cited for this declining state of affairs. But let’s state one of the more obvious ones:

From Outreach Magazine  Decency for President

Let’s paint the church, restripe the parking lot, put in new carpet, freshen up the landscaping. And if we want to be radical, put in a digital sign out front that can flash service times and pithy spiritual sayings. The sentiment is that whatever the church needs is cosmetic.

It’s an alluring idea. Cosmetic touches are easy on the existing constituency. They cost nothing in terms of the real sacrifice needed, which is dying to themselves and living for a mission. Cosmetic changes do not represent real change, only the illusion of it.

The problem with the American church today is simple: It’s turned inward toward the already convinced instead of outward toward those far from God and, as a result, does nothing of an informed nature in terms of strategy or tactics to reach those far from God. Even those growing are, for the most part, doing it through transfer growth at the expense of other churches.

Aaron Earls, “The Church Growth Gap: The Big Get Bigger While the Small Get Smaller,” Christianity Today, March 6, 2019, read online.