Home Features How to Know What to Personally Announce on Sunday 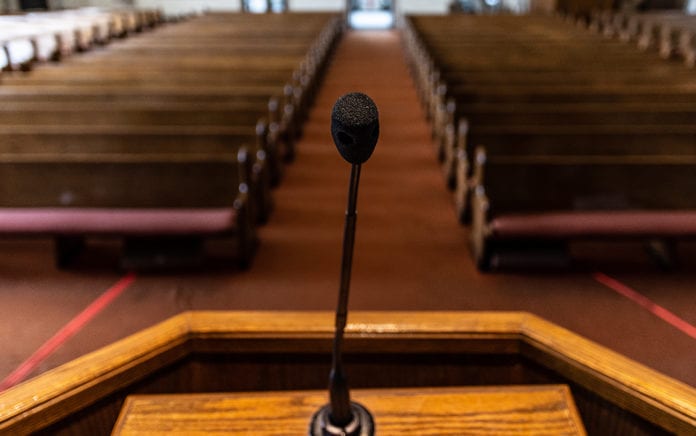 There’s not enough time for a pastor to announce every event, so how do you know what to personally promote?

If you’re a pastor then you know the tension I am about to describe in a made-up scenario.

“Pastor, can you announce the next meeting of the ‘Faithful Followers’? It’s Tuesday night at 7 at Sister Rita’s house. Everyone needs to bring their favorite dessert.”

Do you announce it or not?

It may depend on several things. The size of your church. The expected size of the event. Frankly, how much pressure you will face if you don’t.

But, it’s often not an easy answer.

While I hope you never cave into pressure to do what you know you shouldn’t, I do realize the pressure. (And, even this article will upset some who won’t or didn’t get their agenda promoted.)

When we were a church plant running over 2,500 people a week I still had people who wanted me to wish someone “Happy Birthday” from stage. The same was true when we were a church averaging over 3,000 people per week. And, sometimes the pressure came from one of our most faithful volunteers. So, regardless of church size, I understand the pressure. Do you announce or not?

But, if you want to be effective, you can’t promote everything from stage. You simply can’t.

If I promote everything I wouldn’t have time to preach, nothing would really be “special,” and pretty soon people wouldn’t listen to much of what I had to say. Plus, if I promote one thing there is automatic precedent and pressure to promote another thing. Over time you’re announcing “Faithful Followers,” “Joyful Journey” and Wednesday’s afternoon coffee club.

I think saying the pastor will never promote anything is the wrong answer. I realize the value in a pastor’s endorsement.

So, how do you decide what to personally promote?

I am assuming announcements are made by someone else or some other means on Sunday mornings. These are things I’m expected to say.

From Outreach Magazine  Jesus’ 5 Challenges To Every Leader

Here are three questions I asked myself when I discerned making announcements I made personally:

1. What Needed My Personal Promotion Most?

This seems like a reasonable question, right? What I was asking myself is really what was valuable to the largest amount of people and had a chance to be more successful if I said something about it?

Just asking this question may or may not have eliminated the “Faithful Followers” meeting. It depended on the number of people the meeting impacted within the context of the entire church. If it’s a few, I was less likely to mention it. If it was a significant percent—perhaps 25 percent or more of the church would be interested—I was more likely to address it personally. (And, the percent is just a number. I used my best judgment, and the advice of others who could think strategically with me, for what seemed like a significant impact on the congregation as a whole.) If I talked about a worship night event, for example, I knew a large part of the congregation had the opportunity to attend.

2. Where Did I Need to Add Credibility to a Ministry?

When I arrived at the last church I pastored we had a vision to grow our college ministry. It made sense. The church is less than a mile to the center of a university and a junior college. When they had an activity, although it might impact only a small portion of the congregation, when I promoted it I raised the value of college ministry in our church. It reminded people of the importance and showed my support. I did the same for our parking ministry, which was launched shortly after I arrived.

Again, I realize the weight the position of pastor brings to something—whether we agree with that or not. So, it’s something the church needs to value more then I was more likely to talk about it personally.

3. What Impacted a Large Portion of the Church and Needed More Attention to Be Successful?

We were in a growth mode most of the time I was pastor. In the last church, much of this growth was from young adults and young families. Our preschool ministry was being stretched. What a great “problem” to have. I loved it. But, we did need more willing servants to fill the growing needs in this area. So I frequently brought this growth and need to the attention of our congregation. Our preschool director was thankful and apparently the personal word of encouragement made a difference in recruiting efforts—or so I was told.

If the need can only be met fully with my mention then I know I need to bring it before the church.

Those are some of the ways I discerned what to announce as a pastor. Again, I couldn’t talk about everything our church did and still preach a message.

To be candid, this didn’t eliminate the pressure from those who wanted something announced. It did give me some comfort I had at least thought through my answer.

This also didn’t negate the importance of anything else we were doing. Every ministry is hopefully important to achieving a church’s mission. We had a website, social media, bulletins, slides in the service and announcements someone else did on Sunday to cover other things. When there is only so much time on a Sunday I had to carefully discern what I personally mentioned.

In closing, these are considerations for what I personally announced. Because there is only so much information people can retain I think they may be good questions to filter all the Sunday morning announcements allowed in a church service.