Home Features Talking About Religion in a Better Way 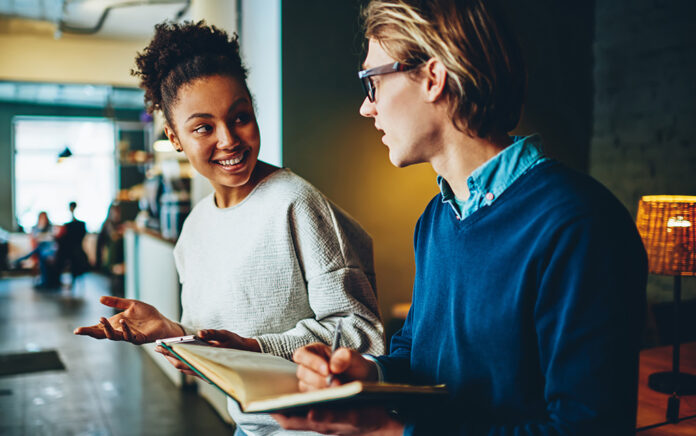 8 Tips for Conversations About Faith

Ever wonder why it’s not polite to talk about religion or politics?

Clearly, politics has become a divisive issue, but religion wasn’t meant to be that way. Talking about our belief in God is supposed to be life-giving, profound and encouraging.

When we were planting a church in Denver, Colorado, I remember having a gathering with our launch team in the backyard of our small, two-bedroom bungalow. During the prayer portion of our meeting, one of our core team members spoke up and asked, “At what point do we tell people that we are Christians?”

I didn’t understand the question.

“What do you mean? Are you asking when you should talk to a person about Jesus?”

“No. What if we haven’t told our friends that we are Christians yet? Is there a point in the relationship when we tell them? I know they have an aversion to religion, so I didn’t know.” As she was speaking, my wife reached over and whispered.

“Preston, it’s not easy for people to talk about God. Not everyone is planting a church and doing this for a living.”

The reality is, it’s not easy for any of us (myself included). Most of us aren’t uncomfortable because we are scared to share about Jesus. We just know that when it comes to talking about religion, everyone has an opinion, and the strongest opinion has typically caused the most harm. We don’t want to come across as the most opinionated, but we also don’t want to compromise what we feel to be true. Which begs the question:

How do we talk about religion without coming across as weird, wicked or something in between?

It’s almost certain that in the next week you will encounter a conversation about spiritual things with one of your neighbors, coworkers, or family members. More than ever before, we have learned that personal interactions should not be limited to shallow exchanges of our favorite sports teams and the weather. If COVID has revealed anything to us, it is that we don’t do well in isolation, and we must have meaningful, in-person community. Since we are committed to meaningful relationships, let’s look at eight better ways to talk about religion.

Don’t Talk So Much.

The key to any good conversation is knowing when to lend a listening ear. By listening, I’m talking about get-through-a-hot-cup-of-coffee-only-asking-questions type of listening. Too often, we are listening for the end of their response so that we can interject what we know to be true. And in doing so, we end up not listening at all.

Neuroscience has taught us that the key to winning trust in any relationship is by listening. With 70–93% of our communication being nonverbal, we say a lot more with how we listen than how we speak. “[B]e quick to listen, slow to speak,” (James 1:19) as James puts it, is the most effective way to have a conversation. I believe that the reputation of the church would drastically improve if we could obey this one verse.

Religion tilts its head in curiosity when someone is talking. This is how it differs from, say, science. Science seeks to answer the question of “how” something has taken place. Religion answers the question “why.”

Why did God create?

Why are we here?

Why did divorce happen?

Side With the Skeptic When You Can.

Talking about religion often feels like walking in a minefield. The whole conversation is ready to blow at any moment. We can tell by the person’s apprehension that there is a story of pain at play. The Bible has been manipulated. Doctrines misused. Power abused. There has just been a lot of wrong done in the name of “religion.” And if the #exvangelical movement has taught us anything, it’s that religion is still not behaving like Jesus.

If you can sense that someone has a story like this, take their side. Hold ground for them. Do not try to protect the reputation of the church when it has hurt them. People need a Christian who is their advocate; they don’t need another advocate for harmful Christianity. History is filled with the latter, and that only perpetuates the harmful cycle.

If I wrote the remainder of this article in a language foreign to you, you would probably move on to the next article or video. Why? It’s because when something doesn’t make sense to us, we merely move on to what does. Words like testimony, new covenant, and blood of the Lamb are green lights for people to move on to a worldview that they understand.

There is nothing sacred about a vocabulary that doesn’t make sense. There is, however, something sacred about communicating redemption in a way that people can relate to. This is at the very heart of why we have different Bible translations! Some of them favor a word-for-word translation approach; others a thought-for-thought approach. The one that is best for us is the one that most clearly communicates God’s story to us. The same is true when it comes to how we communicate with non-Christians. Perhaps this is why so many people are claiming to be spiritual but not religious. They can identify with the word spiritual, and they refuse to identify with the word religious.

Be Open to Being Wrong.

We aren’t right about everything just because we are Christians. When I was in seminary, one of my professors used to say that he would be surprised if, when he gets to heaven, he is 70 percent right in his theology. At the time I thought he was being foolish. Now I think 70 percent is generous!

There should be a humility about how we talk about what we think we know. We are truth seekers. We should be experts on the posture of humility, not the passion of our homilies. In fact, you will never find in Scripture where Paul or the disciples pray for more certainty. They know that life with Christ is a mystery to be explored. I think there is evidence that between Paul’s first letter, Galatians, and his later letter to the Romans, he matured in his theology and how he treated others.

Have you ever seen a movie and thought to yourself, “That rings true for me!” Why? Was it the redemptive narrative woven throughout? Was it the character’s resilience in the face of difficulty? Pastor and author Timothy Keller has famously pointed out that all redemptive stories are shadows of the real redemptive story we all long to participate in. We don’t have to jump straight to a chapter and verse in the Bible when talking to someone about religious things. We can ask them why they love The Matrix so much and go from there.

This will require a good amount of awareness on our part. Some creative thinking has to be given to the nature of God’s activity in the world outside of the stories of the Bible. This is a good thing, though! The more we can point out God’s fingerprints in reality, the more people may be compelled to follow him. Even Paul quoted the secular poets of the day on Mars Hill when speaking about their place in God’s family. Originally, the line “in him we move and live and have our being” was pantheistic in nature. Paul turned it around to point out where we all have the origin of our being. Of course, this may mean that we can’t continue to be known by what we are against, but that’s a whole different post.

Their Fate Isn’t Up to You.

There is a lot of pressure to have someone say the sinner’s prayer. Or get them to go to church. Or to take some kind of next step in their faith journey. This pragmatic approach is very off-putting to people who are not interested in the same religion that we are. But I know why we do it. We feel an urgency about the eternal state of their soul. Simply put: we don’t want people to go to hell.

What if pressing the matter made them more likely to reject Jesus? What if the Romans Road was how they went backwards, not forwards, with God? The Western Church adopted this “closing the deal” mentality, but our eastern brothers and sisters practiced something different entirely. During the early centuries of the Eastern Church, Christians believed that introspection and reflection from someone’s words and virtues were the most persuasive ways a non-Christian would decide to follow Jesus. And the responsibility was never on the Christian to say more. They were too busy pointing out the logs in their own eyes to continue to bother with the speck of disbelief in their brothers’. Constant proximity to those in need was the best way to share the gospel.

The old adage is true: People don’t care how much you know until they know how much you care. We can’t act like we care about someone’s soul if we aren’t even willing to know their name, their story, and what they need.

In the work I do with doubters and exvangelicals, I’ve learned that the reaction someone has had to a doubter’s disbelief or lifestyle choice sets the trajectory for the rest of their relationship. We would do well to first ask ourselves what bridges we need to rebuild before having deep conversations about God and the meaning of life. The impression someone has of us precedes initiating conversations that matter.

The Doubters’ Club is an organization that we started years ago. These are gatherings around the world with a Christian and a non-Christian co-moderating the conversation. The goal is to model friendship and pursue truth with one another, and it is done by using our questions as common ground. When we train Doubters’ Club Pioneers to launch a gathering in their community, we find that initiating conversations around religion is the hardest thing to do. Hopefully, by using these eight pieces of advice, we can better talk about this part of our lives that we believe will actually change the world.