Home Features God Is Present in Our Storms 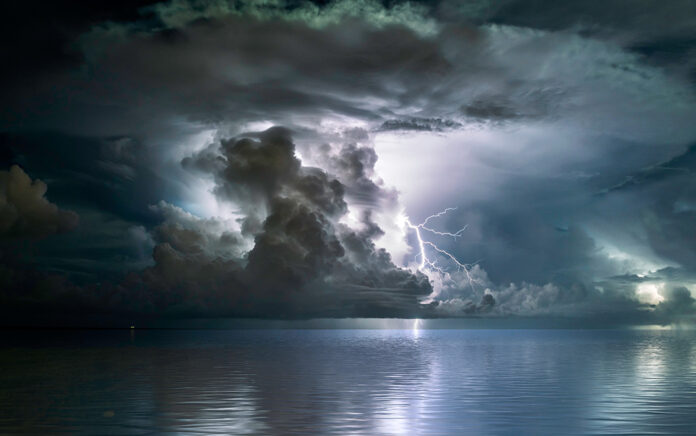 The storm did not awaken Jesus, but the cry of his disciples did.

Storms happen all the time on the Sea of Galilee, but apparently this was a pretty bad one, because even the seasoned sailors were freaking out.

Meanwhile, Jesus was asleep in the stern of the boat. Now, in a broad sense, God never sleeps. He’s always aware of what we’re going through. The Bible tells us that “he who keeps Israel shall neither slumber nor sleep” (Psalm 121:4).

Jesus was fully God, but he also was fully man. So, he was asleep, exhausted and drained from the activities of the day. Interestingly, the storm did not awaken him, but the cry of his disciples did.

God Knows of Our Storms

Here’s what happened next:

“Then [Jesus] arose and rebuked the wind, and said to the sea, ‘Peace, be still!’ And the wind ceased and there was a great calm.” —Mark 4:39

From the original language, the phrase “peace be still” also could be translated, “Peace be muzzled,” as though Jesus were talking to an aggressive wild animal or dog. Awhile back, my wife and I were walking in our neighborhood, and as we went through a little park, someone was approaching with a small, yappy dog. And sure enough, that little dog bit Cathe on the ankle and broke the skin. Now we jokingly call that park Dog Bite Park. We memorialized it in a way.

Jesus muzzled that storm. He would not be stopped, because he was on his way to reach a man who had been tragically taken over by the power of demons. And it was not one demon or 10 demons. It was many demons.

This reminds us of how God loves us. Jesus told the story of a shepherd who had 100 sheep, and one went one astray. So that shepherd left the 99 others and sought out the one stray sheep. When he found it, he wrapped it around his neck and brought it back, rejoicing (see Luke 15:1–7). That is how Jesus is.

Maybe you’re going through a storm; a hardship, difficulty, or perhaps even a tragedy. It’s a powerful storm, and you feel like saying, just as the disciples did, “Do you not care that we are perishing?” (Mark 4:38). In other words, “Don’t you care that I’m in trouble right now? Are you even paying attention?”

From Outreach Magazine  The Secret Power of Availability

Storms will come into our lives. Sometimes God himself will send the storm, as he did in the case of Jonah, who was disobedient to him. God told Jonah to go and preach to the city of Nineveh, and Jonah said no. We might say that Jonah was the original chicken of the sea, going the wrong direction and running from God.

But God always has the last word. He sent a mighty storm, and it was through the storm that he got Jonah’s attention.

Why We Face Troubles

Like Jonah, we can sometimes bring storms on ourselves because of our disobedience. You might be in a situation right now where you’re effectively reaping the consequences of your actions. Maybe you’re asking, “Why is this happening to me?” But the chickens have come home to roost, so to speak.

When we cry out to God from our storm, sometimes God will stop it, as he did for the disciples on the Sea of Galilee. But other times he will sustain us through the storm. And know this: Your storm has a beginning, middle and end.

The reality is that we are either pulling into a storm or coming out of one. But Jesus is with us in our storms, just as he is with us on our sunny days. And we learn things in the midst of storms, hardships or trials that we will not learn anywhere else. So, there’s no reason to panic.

Enduring the Storm with God

Notice that Jesus said to the disciples, “Let us cross over to the other side” (Mark 4:35). Now, if Jesus had said, “Let’s get into the boat, go to the middle of the lake and die,” they probably would not have boarded that boat. But that is not what Jesus said. He said they were going to the other side of the lake. He did not promise smooth sailing, but he did promise a safe arrival.

He promises the same to us right now. He never said that life was going to be easy. In fact, he said, “In the world you will have tribulation; but be of good cheer, I have overcome the world” (John 16:33).

He will get us to the other side. And ultimately for Christians, the other side is when we get to heaven. Until then, it’s better to be in a storm with Jesus than anywhere else without him. Whatever you’re going through, he is with you.

The Bible reminds us, “You are of God, little children, and have overcome them, because he who is in you is greater than he who is in the world” (1 John 4:4). God is more powerful than your storm, and he is bigger than your problem.

There is a God in heaven who deeply loves you. If you forget everything else, just remember that God loves you and wants to reveal his custom-made plan that he has just for you. He wants to flood your life with love, peace, joy and purpose. And if that weren’t enough, he wants you to spend eternity with him in that amazing place called heaven.

One of my favorite verses from the Bible is Jeremiah 29:11, where God says, “For I know the thoughts that I think toward you, says the Lord, thoughts of peace and not of evil, to give you a future and a hope.” Yes, it’s true: God loves you and has a plan for your life. God has a future for you.