Home Features You Were Dead 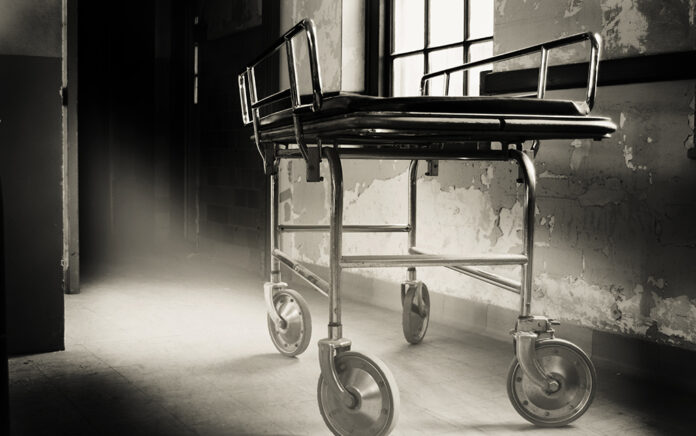 Christianity is not a crutch. It’s a stretcher from which the dead are raised to life.

“And you were dead in your trespasses and sins in which you previously walked according to this worldly age, according to the ruler of the atmospheric domain, the spirit now working in the disobedient. We too all previously lived among them in our fleshly desires, carrying out the inclinations of our flesh and thoughts, and by nature we were children under wrath, as the others were also.”

This is how the Bible describes all of humanity in Ephesians chapter 2:1–3. It’s a pretty dire situation. Notice in particular the word the Bible uses to describe the human condition:

If that word doesn’t speak to the severity and desperation of our situation, then surely nothing does. In fact, this word moves our situation well past desperate and into the territory of hopeless. And in a surprising way, this description from Ephesians 2 serves to contradict a well-known cultural axiom:

Christianity is a crutch for the weak.

When someone makes this statement, they usually mean it as an insult. What they mean is that people believe in God and in particular Jesus because they need to believe in him. Such people don’t have the intestinal fortitude to accept the randomness of life, so they fabricate this idea of a sovereign and loving God who is in control of events. They lean on this belief like a crutch because they aren’t strong enough to stand underneath the reality of the universe.

But according to Ephesians 2, Christianity isn’t a crutch for the weak, but not because that statement is insulting.

According to Ephesians 2, that statement isn’t insulting enough.

Christianity isn’t a crutch for the weak, because a crutch gives us far too much credit and robs the gospel of its full implication and power.

Christianity isn’t a crutch for the weak; it’s a stretcher for the dead.

We often think being saved is something like this: We are floating in the sea of sin and death about to drown when, with our last bit of strength, we cry out to Jesus who throws us a life preserver. That’s certainly a situation from which we would need to be saved, but that’s not what we see in this passage of Scripture. Instead, the picture here is not of someone who is drowning, but of a corpse, dead and bloated, floating face down in the sea. No strength. No power. No hope.

That’s what it means to be saved.

And that’s the promise of the gospel. Ephesians 2 continues with two of the most amazing words in all of Scripture: “But God …” We were dead, but God … We had no hope, but God … We could not rescue ourselves, but God …

The gospel doesn’t claim to help the weak; it claims to make the dead live again.

It is only when we begin to see the true nature of the utter despair of humanity that we begin to see Jesus not as the key to a better life. Not as a sage only teaching about love. Not as a miracle worker only concerned with the alleviation of human suffering.

Jesus is our Rescuer. And, according to the Bible, he rescues from sin and death. In the ultimate “But God” moment, Jesus reaches down and hauls the corpse of humanity up and breathes new life into it. In so doing, he saves us from sin and its corresponding just punishment: death.

Jesus, the Great Rescuer, has come, and his salvation is the move from spiritual death to spiritual life forever with him.