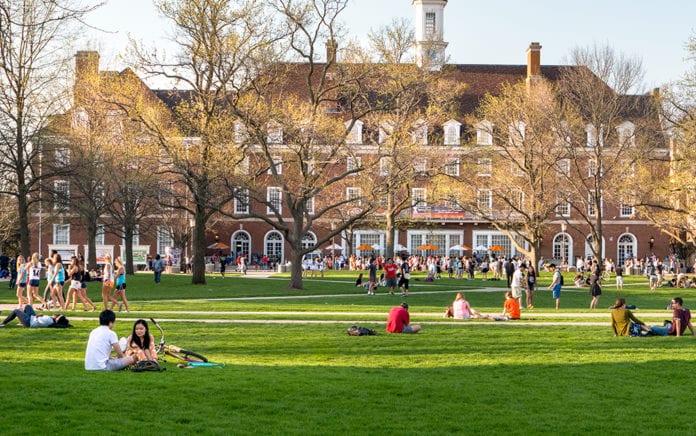 Spiritual awakenings often happen on or near university campuses.

The college town my family and I now call home is no metropolis—you can drive from one side to the other in about 15 minutes. But I’m convinced that planting churches in towns like mine is key to seeing spiritual awakening in the 21st century. You might think it rote to hear another pastor talking about why his context is strategic. That’s fair—but I do have a bit of history on my side.

Historically, most spiritual awakenings started on or near a university campus. Luther sparked the Protestant Reformation while a Bible professor at the University of Wittenberg. George Whitefield and John Wesley were the primary leaders of the First Great Awakening in the 18th century, and they met as students at Oxford. Between 1888 and 1938, the Student Volunteer Movement catapulted twenty thousand Christians into overseas missionary service and was birthed out of a college missions conference.

Historically speaking, if you want to help cultivate spiritual awakening, a college town is one of the best places to be. This is why I’m convinced that denominations and networks should devote themselves to planting collegiate-focused churches—multi-generational churches that prioritize reaching college students with the gospel, discipling them and then sending them to the nations.

Here are three reasons why:

College students spend four years (maybe five) forming friendships, figuring out their future and dreaming about changing the world. They have a lot of disposable time and spend most of it on a campus that is largely open to your local church. College students have time, are eager to learn and long for a vision to give their lives to. Mission is fueled by deep discipleship, and the college years are fertile soil for it.

Bank executives in Manhattan, entrepreneurs in San Francisco and policy writers on Capitol Hill all have something in common: At some point, they were all sitting in a western civics class. The vast majority of influencers in our culture attended a four-year college or university. If we make disciples on campus today, we’ll have disciples in places of influence tomorrow.

From Outreach Magazine  How to Find Spiritual Renewal in This Season

3. A PIPELINE FOR MULTIPLICATION

We need to plant thousands of churches to keep up with population growth. What’s holding us back isn’t primarily funding or vision; it’s a lack of qualified church planters. Many churches want to plant but don’t know where to find young leaders to make it happen. If one of the more than 4,000 colleges and universities in the U.S. is near your church, you need look no farther for your church planting pipeline. That institution is full of young leaders who need the gospel and want a purpose for which they can give themselves away—you just need to engage them.

In 1858, a college student attended a service held by a Baptist church in my town, and God used that service to bring her to repentance and faith. She finished her degree, was discipled by that church, and in 1873, was sent to China as a missionary. You may have heard of her—her name was Lottie Moon. I might be crazy to think that college students can change the world. But, then again, it wouldn’t be the first time.