Home Features ‘Day for the Unreached’ to Focus on Billions Who Have Never Heard... 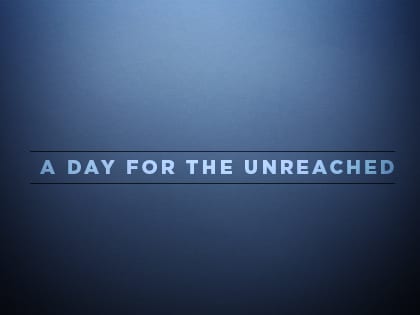 On May 15, 2016, churches and other faith-based organizations are invited to pray and advocate for unreached people groups.

NASHVILLE–An alliance of globally focused ministries has designated May 15, 2016, as the International Day for the Unreached, a one-day event intended to inspire and mobilize Christians to reach out to more than 2 billion people around the world who have yet to hear the gospel.

The event is sponsored by the Alliance for the Unreached, a group that includes Reach Beyond, Bibles For The World, Operation Mobilization, The Seed Company and Missio Nexus.

“In America, it’s easy to get comfortable and complacent. But we want to remind people that there are literally billions of people around the globe in desperate need of the good news of Jesus, but have never heard His name or story. We’re called to bring it to them,” said Wayne Pederson, Reach Beyond president.

Scores of Christian leaders are urging people to get involved. Saddleback Church Pastor Rick Warren made a direct appeal to all Christians:

“With more than 2 billion people who haven’t had a chance to meet Jesus, it’s time for the Body of Christ to take a radical stand and say, ‘This has to end in our generation.’ Join me in committing to pray, give, go, and advocate for those who need to know Christ by participating in the International Day for the Unreached.”

Evangelism has fallen on hard times in North America. Barna Group examined evangelism habits over two decades and found a disturbing trend. In a summary titled “Is Evangelism Going Out of Style?”, Barna President David Kinnaman concluded: “Evangelism is on the decline among key demographics, especially among ‘Busters’ and ‘Boomers’ who make up nearly two out of three active Christians today.”

From Outreach Magazine  Mexico: What We Can Learn From This Expanding Church

It isn’t just evangelism at home that is suffering.

“As many believers in North America have lost concern about their neighbors who don’t know Christ, it’s becoming even harder to be concerned about people around the world who they will never meet,” said Marv Newell, senior vice president of Missio Nexus.

Some American churches are losing their zeal for foreign missions. At the same time, these trends are cultivating a fresh sense of urgency for Christian leaders who are promoting the International Day for the Unreached as an event to raise awareness of the dilemma and search for solutions.

George Verwer, founder of Operation Mobilization said, “The birth of OM in the late 1950s stemmed from the lack of the gospel in places like Turkey, Iraq, Afghanistan and other unreached nations. Today, we have yet to meet our goal to spread the gospel to all nations and peoples, but I pray the next generation will do better. This event is a mega step in the right direction.”

“Part of our role in the Bible translation movement is to help the church understand the tremendous need for Scripture among so many language groups and communities,” said Rev. Samuel Chiang, president and CEO of the Seed Company. “There is a historic opportunity with efforts such as the International Day for the Unreached to bring awareness to the worldwide church to finish the work together, in this generation.”

The Day for the Unreached will include a variety of efforts to raise awareness.

Many major radio networks and stations around the country will promote the event for weeks leading up to May 15. Pastors around the country are urged to preach sermons on the topic, while small groups focus on Jesus’ command to go to the nations. Individuals will also be called to join a 30-day prayer movement, interceding for the salvation of the unreached.

From Outreach Magazine  How Should Christians View Immigration and the Refugee Crisis?

People interested in learning more about the unreached or to get involved can download a free Great Commission Action Guide from the website, DayForTheUnreached.org. An abundance of other resources will soon be available at the site, including bulletin inserts, sermon outlines, promotional posters, web banners, videos and radio spots.

Information is also available on the International Day for the Unreached Facebook page.

Perhaps it’s fitting that The International Day for the Unreached falls on Pentecost Sunday, the day the Holy Spirit came upon the first followers of Jesus, empowering and charging them to share the gospel with people from all over the world.

This renewed emphasis on world evangelism has some looking forward as well. “Let’s not forget that the return of Christ is tied to every nation hearing the good news,” said John L Pudaite, president of Bibles For The World. “We’re not saying we can usher in the Second Coming. But we can be a part of a last days move of God that is foretold in scripture. And that’s both a privilege and a profound responsibility.”

Individuals, churches and media outlets can learn about creative ways to participate in the International Day for the Unreached by visiting DayForTheUnreached.org.