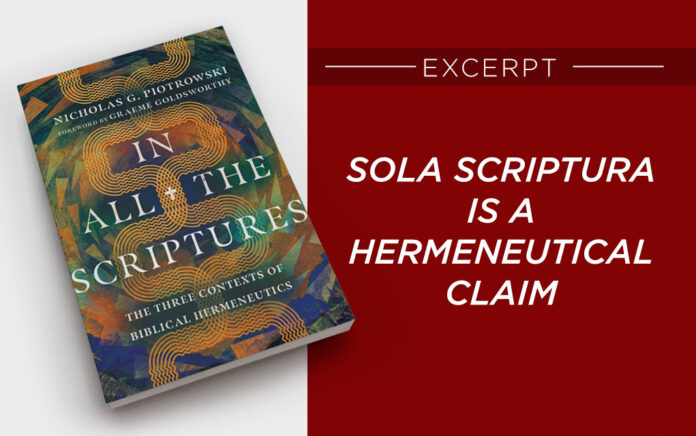 Biblical interpretation is both a science and an art, and it has powerful implications for what we believe and how we apply God’s Word.

In All the Scriptures

Sola Scriptura Is a Hermeneutical Claim

The Protestant Reformation was a time of questioning long-standing customs. The Renaissance motto ad fontes—”to the sources”—carried into the Reformation period and propelled scholars to return to studying the Scriptures in their original languages. When they compared their renewed findings to several points of medieval dogma, they found the latter out of step with the former. Thus began a debate over where the locus of Christ’s authority resides. Do church traditions hold equal (or more?) authority to the Scriptures? Or are the Scriptures the unrivaled highest authority for the church? The Reformers, of course, believed the latter. This, then, constituted the formal cause of the Reformation: sola Scriptura.

There are many implications to this rallying cry, sola Scriptura. For one, it means the Bible is the only authority for doctrine and piety. All other opinions must be tried against the Scriptures, never vice versa. Second, Scripture is its own interpreter. There is no earthly power that authoritatively prescribes the meaning of Scripture, but Scripture interprets itself. When there is a dispute over the meaning of a given passage, then the rest of the Bible is brought to bear. This comes from Irenaeus and Augustine (Scriptura sui ipsius interpres). Third, and this develops out of the second, the Bible itself teaches us how to read it. Later passages reference and interpret earlier passages. Thus, the later passages are applying a hermeneutic. Interpreters can look at that and glean how, in a sense, the Bible is asking to be read.

Fourth, now developing out of the third, the whole Bible is about Christ. “What gave Luther’s doctrine [of sola Scriptura] its unique reformational character was its radical Christocentric basis. . . . The great weakness of allegorical exegesis was precisely that it obscures the Christological witness.” Again, this is a conviction that emerges when the authority of the Bible is recognized, and therefore the Bible is carefully studied. This means that the scope of the whole (and any part thereof) does not address the concerns of contemporary culture as a first priority; but its concerns are with Christ first and foremost. To put it another way, the Zeitgeist comes under the judging gaze of Christ. It does not set the agenda for reading or theologizing. It is this rejection of allegory and promotion of christological readings that resulted in several material causes of the Reformation, the other traditional solas.

John Calvin (1509–1564) especially avoided allegory and spoke against it. Instead he saw typological correspondences pointing to Christ, averring that “the clarity of sacred Scripture is grounded in Christ alone.” For example, Calvin saw that the crying of the mothers in Jeremiah 31:15 is immediately followed with “the most delightful consolations” in the next two verses. Israel’s mothers should not weep for their children because they will come back to her. Then in Matthew 2:18 the crying is again mentioned, but not the consolation, as again “Rachel’s children” are taken from her. To Calvin, the reader is to see the repetition of Jeremiah’s situation in the days of Christ and so equally expect the restoration that Jeremiah foresees: “as Jeremiah promises a restoration . . . so Matthew reminds his readers that. . . [Christ will appear] shortly afterwards as the Redeemer.” Thus, the historical circumstance in Jeremiah has elucidated a typological pattern of Christ’s life.

Yet, while Martin Luther (1483–1546) affirmed these tenets, he still did allegorize at times. You can take the monk out of the monastery, but you cannot take the monk out of the man. This just highlights again how thoroughly pervasive Zeitgeists continue to bedevil people, even when they want to shed them on theoretical grounds. I think the reason is because the cultures people live in exert an enormous hermeneutical influence, more than they themselves realize.