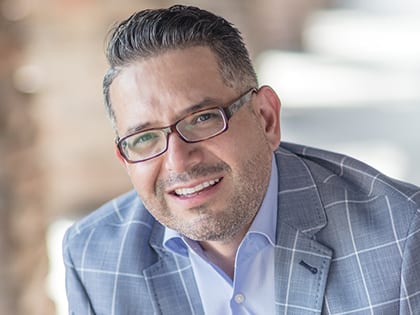 “I was determined to give myself to this call until I succeeded. I had no desire for a Plan B.”

Jaime Loya, pastor of Cross Church in San Benito, Texas, has been recognized by the National Hispanic Christian Leadership Conference, Third Day Believer’s Network and the Heritage Registry of Who’s Who in America as one of the most significant and successful Hispanic pastors in the United States.

But back in 1999, after burning his arm cooking chicken at a fundraiser for his church of 50, Loya had reached his breaking point. He told God he was ready to quit.

That’s when God told him to stop praying for revival.

We recently sat down with Loya to learn more about those hard early days and what encouraged him to stay true to his calling.

Can you tell me a little about your childhood?

I grew up in San Benito, Texas. It’s always been my hometown. We live 15 minutes from the southernmost point of the United States-Mexico border. I had a great childhood. My dad was a postman, and my mom stayed at home taking care of my two older sisters and me.

What was it like growing up in a border town?

My parents were third-generation Americans. My great-grandparents are the ones who came over as immigrants. All I have ever known is life in America. We are really in a small community; it’s not like a big border town. I would say it was like growing up in any other place. We never had hard problems with the border like some of the bigger cities, Brownsville or McAllen.

So immigration issues didn’t affect you?

My dad was educated and had a good job. We grew up fairly well-off, but we were surrounded by poverty. My friends in my neighborhood were all migrant workers. When school was out, they would leave, and I was left alone for the summer as families would go up north and work in the fields to make a living. I saw the marks of poverty—the clothing, the lack of food, the welfare. I swore I would never be poor.

What did you want to do when you grew up?

God had different plans for me. I got saved when I was 16, and I got a real strong conviction for my life that that was not what I was born to do. That’s when my heart started to change, and I felt God calling me into ministry. That changed the whole direction of my life—it wasn’t about me; it wasn’t about money anymore; it was just about how many people I could help.

What was your relationship with the church before that time?

I grew up in the church. I always knew about God. I am a first-generation pastor in my family, but even though I don’t come from a long line of preachers, the greatest servants I ever saw were my parents. They were there every Sunday, serving in different areas of the church, and that had a great impact on my life and on others. I just knew that serving God was part of what you do in life; it was not an option. My parents taught me that you use your gifts, talents and time as a means of advancing the gospel and helping the local church.

Can you tell me more about your conversion?

I had never accepted God into my heart. The night I got saved, I went to church, and I remember that it was like the preacher was speaking just to me and everyone else disappeared. I don’t even know how, but by the time I knew it, I was at the altar on my knees crying like a baby. I can’t even tell you what the preacher preached; all I know was that God had spoken and pierced my heart. When the preacher prayed over me, he prophesied and told me about this big ministry I was going to lead and that one day I was going to reach a ton of people for Jesus.

Did you feel a calling to ministry then?

Yes. It was overwhelming. For me, everything is related to my calling. Brian Houston said, “A career is what you are paid to do; your calling was what you were made to do.” Growing up, I had dreams—night dreams—about me preaching. I think there was a call on my life all along, but I think it got crystal clear the night I was saved. My eyes were opened. It was just a matter of whether I would obey or not. Even though I was 16, I didn’t waste much time. I started preaching at the age of 17 in youth groups. I got married right after graduating from high school when I was 18 and went to a local Bible institute and graduated first in my class. When I was 20, I started to hear God telling me to plant a church in our hometown.

Did you have any reservations about starting a church at such a young age?

I did have some reservations but not about my age. Although I knew God was calling me into ministry, I would have never chosen to be a pastor because I am an introvert. I’m not one to get in front of people; I am not the life of the party. I’m what you might call a reluctant leader.

Did you question God about that?

I began to go back and forth with God about it. Finally, I reached an agreement with God that if we did start a church, that he would grant me this one thing: I would lead a church like no other church I had ever seen or been a part of—one that was truly living out the gospel.

What did you mean by that?

In my experience, church was a gathering of the saved. I saw a lot of powerful services, mighty movements of God, speaking in tongues, falling-outs—but I was not seeing a lot of people coming to Christ. I wanted it to have an outward focus, reach people who were far from God and make a real difference. I also wanted the church to reach the next generation. The church I grew up in was not a place my friends wanted to go and become a part of. I had no reference point of what that might look like, but I told God it had to be different.

A 20-year-old introvert starting a radically different church in an impoverished area. Did you have any fear of failure?

I remember sitting in a restaurant with my aunt after I told her I was going to plant a church. She encouraged me to get a college education just in case ministry didn’t work out for me. I told her, “I don’t want to have failure as an option.” I was determined to give myself to this call until I succeeded. I had no desire for a Plan B.

Tell me about the church plant.

We started Cross Church [known at the time as Valley International Christian Center] in 1995. My wife and I, along with her parents, met in their living room. It was a little frame house with no more than 1,000 square feet. It’s where my wife and I lived right after we got married. We could only seat about 20 people.

From Outreach Magazine  The Science of Virtue

Did you grow quickly?

We were there for about six months, then moved to a small rented space, but for the first four or five years of our ministry, we barely made enough money to cover the lights. We just kind of lived from Sunday to Sunday. We were hanging on by a thread and would just keep it going one more week, one more month, hoping to see some kind of breakthrough.

So did the young boy’s fear of poverty come back to haunt you?

The funny thing is that I didn’t want to be poor because I knew what poverty was, what it looked like and what it did, but when I started the church I didn’t get paid a penny for the first two years. I never even thought about it. I didn’t see the church as a way to make money because I felt God calling me to do this. I was bivocational, and my wife was working at the hospital as a medical-records director.

My discontent was more in the lack of numbers than my lack of money. A couple of years into the ministry, I heard from the Lord that I was supposed to go full time. I told the makeshift board, “Hey, God is calling me to go full time, because if I continue to work part time, we will continue to get part-time results.”

So the church was kind enough to give me a salary of $300 a month. It ended up that the very thing I was most afraid of—going on welfare—is what happened.

No. At year four, I reached my breaking point. I told God this was not what I envisioned when I said yes to his calling. I felt like a failure. We had about 50 people meeting in a 1,200-square-foot rented facility. We were doing all sorts of fundraisers and garage sales and events, yet we would have sold the cat if it meant keeping the lights on. We were doing everything we thought we were supposed to do, but people just weren’t coming to the church.

Did you wish you had a Plan B?

I was 25, and my wife and I had just had a baby. I was making about $500 a month at the time. My wife was crying all the time because she wanted to stay home and take care of our newborn. I had to tell her she had to stay at her work or we wouldn’t make it. It was just a breaking point for me, not so much as a pastor, but as a man. I felt like I wasn’t providing for my family. That’s when I told God I wasn’t going to do this anymore. It was one thing if was just me; it was another thing if it was my wife and child.

As a pastor, you are going to face fear of failure. I would just say, “Don’t let fear outweigh your faith and hold onto your calling.” In the years our church struggled, my calling was an anchor.

In part 2 of the interview with Jaime Loya, the pastor of Cross Church describes his church’s transformation and revitalization, and discusses how the issue of immigration plays a role in his congregation.