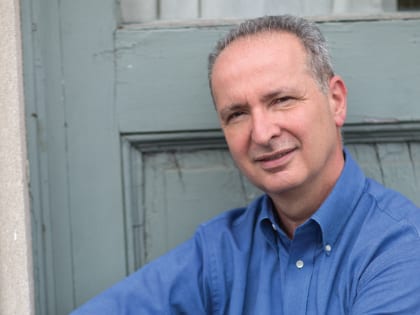 “It’s one thing to preach sermons and cast vision. It’s another thing to get into the nitty-gritty of building healthy culture and confronting the elephants in the room.”

You speak a lot about facing your shadows.

Shadow is a nice word because it’s not simply something sinful. We all have shadows. We all have parts of us that involve less than pure thoughts and motives. They’re often quite hidden.

For example, a person has gifts in speaking and mobilizing people. That’s good. But the shadow side of that gift may be a great need for affirmation from other people. It’s insatiable. And it’s subconscious—that need for approval.

Or you value excellence. That’s really good. But the shadow side is becoming an unhealthy perfectionist. You’re short with people. Critical and unloving.

You have a zeal for truth. That’s a good thing. But the shadow is, you don’t like people who disagree with you.

Part of being a leader is the courage to face my shadow continually. If I don’t take the time in my own spiritual formation to address my shadow, I can wind up leading out of my shadow, and I’m not even conscious of it. In the process, I affect the culture of the team I’m leading. As the lead pastor, my shadow ends up affecting the whole church. So facing my shadow is pretty important. I want to maintain vigilance because it can erupt at any time.

There’s a reason that we get into patterns of thinking and behavior that over time come to characterize us. They do something for us. There is a payoff, even though it may be somewhat twisted. So I suppose the challenge is finding a healthy replacement for those old patterns.

Absolutely. So it’s like Ephesians: Take off the old, but put on the new in Christ. Facing my shadow is just part of the problem. Then I have to put on the new.

I’ll give you a personal example. I like to be liked. When I preach and cast a vision people tell me I’m wonderful. So I gravitate to that naturally, right? But I used to do a very sloppy job of supervision of people who worked for me because I didn’t like to say hard things to people. I didn’t want to confront elephants in the room. These are hard conversations, so I would avoid it. Even in doing job reviews, I would lie. I wouldn’t call it lying, but I wasn’t totally truthful, because I didn’t want the conflict. I didn’t want the tension.

That didn’t operate in just leading a team, but in all of life. I had to put on the new. I had to learn how to speak clearly, respectfully, kindly and honestly. I had to learn to have difficult conversations. I had to learn a number of skills—emotionally healthy skills.

If a leader becomes emotionally healthy will that automatically generate a healthier culture within his or her sphere of influence?

Let me illustrate it like this. Manhattan is an island of granite—hard rock. When they build a skyscraper they have to drill steel beams or pilings into the ground. They’ll spend quite of bit of time pounding them deep into the foundation of the granite so they can build a skyscraper on rock. Those pilings can sometimes go 20 or 25 stories down in the ground before they start building the skyscraper up. If they don’t put the pilings in properly, in time the building may begin to lean, or cracks may appear in the walls.

From Outreach Magazine  Mark DeYmaz: The Church as a Benevolent Owner—Part 2

What I realized in my fourth conversion was that the pilings in my own personal life needed to go much deeper for the size church we were and the complexity of our church and the influence God had given us. I had to do a better job of facing my shadow, slowing down for loving union with God, leading out of my marriage, practicing Sabbath delight—these things had to become deeper in my life. Otherwise, the cracks would develop in the building of New Life Fellowship. If you’re going to be a leader in the church in the name of Jesus, these issues of your inner life have to be deep, because you’re not just leading yourself, you’re leading other people.