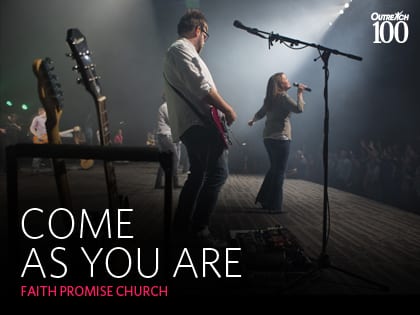 Founded in 1995, Faith Promise Church in Knoxville, Tenn., has grown steadily over the past 20 years. It started out with a launch team of 200 and now serves over 5,500, having opened its first multisite campus in the fall of 2010.

Through the years, the church has opened additional locations throughout the greater Knoxville area, and recently launched two additional sites. Today, the church has a thousand more members than at this time last year—a 22 percent growth rate.

“Moving into a multisite model has enabled us to go from addition to multiplication,” explains Senior Pastor Chris Stephens. “Instead of giving one or two invitations a week at one location, we give 13 invitations at six locations.” (This includes the five physical locations, a partner campus in Costa Rica and an Internet campus.)

Obviously, by serving and reaching more people, the opportunity for spiritual growth increases exponentially. For instance, last year the church performed a record number of baptisms (on Easter Sunday alone, the attendance was 12,752, and they baptized 288 people that weekend). This year they have almost broken last year’s baptism record with five more months still remaining in 2014 as of this writing.

Stephens describes Faith Promise as a “come as you are” church. “It doesn’t matter what your skin color is, how you dress, how much money you make, what kind of car you drive,” says Stephens. “We welcome everybody.”

Of course, not everyone adheres to an unconditional culture of love and acceptance. At Faith Promise’s newest campus, some members of the congregation were flustered when a cross-dresser named Tom began attending. Though they insisted that Tom be kicked out, Stephens refused, saying, “We’re gonna love whomever God sends through the door.”

From Outreach Magazine  The Life Church: No. 6 Fastest-Growing Church, 2016

Ultimately, about half of the congregation left, which was fine by Stephens. “Tom got saved,” says Stephens. “And now we’re back at numbers bigger than ever before.”

As for plans for the future, the church’s biggest challenge has been maintaining leaders—especially as the church branches out to multiple locations, thinning out volunteers. The church, however, has become very intentional about developing next-generation (18- to 25-year-old) leaders.

Spreading their wings and growing the church.