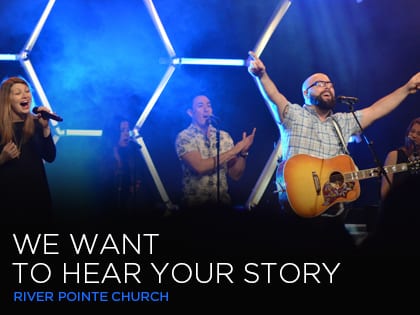 A coworker invited Yee, a Ph.D. student from China, to join him to worship at River Pointe Church in Richmond, Texas. Though Yee wasn’t a Christian, he was a fan of rock-and-roll music so he agreed to attend a contemporary service. Yee later met Senior Pastor Patrick Kelley for coffee and confided that he didn’t know if he believed in the God described in the Bible. “I believe there’s a god,” Yee said. “But I’m trying to figure out this idea of Jesus Christ being God.”

Kelley asked Yee if, as he was processing his feelings, he would consider lending a hand at church with road crew. Yee was eager to help out.

“He’s not a believer yet, but we’re praying for this man,” says Kelley. “When it comes to inviting people to God, it’s high-impact, high-touch. We give people tons of room for the Holy Spirit to work in their lives.”

That type of work might start with petting a chicken. Several years ago, somebody dropped off a chicken at the church. Staff noticed the children’s fascination with this chicken so they went out and bought 20 more. From there, it snowballed. Next came the goat, then miniature donkeys.

“We’ve basically got a petting zoo, but it’s a great tactical experience for our children, and also for those in our special needs ministry,” says Kelley, referring to the recently launched adult special needs Sunday school class.

It’s trying to get to that chicken—and the church—that presents a hitch. Only one road leads in and out of River Pointe, which is problematic when each service carries 850 to 900 cars. Cramped worship space is also an issue. Though the sanctuary seats 1,400 and they’ve added services, the pews overflow.

From Outreach Magazine  What Churches Need to Start (and Stop) Measuring

They just built a 17,200-square-foot building for middle and high school students, which caused growth. But that growth, in turn, produced pinch points in the church’s parking, traffic and worship space. Though they’re planning another capital campaign this fall for the purposes of creating more parking, it’s a constant struggle to maintain the momentum. “We don’t want to stifle the Spirit of God working in people’s lives,” says Kelley. “But we’re definitely pushed to continually think outside the box.”

Satellite campuses (Missouri City, which opened in January 2012, and Houston, which opened in March 2015) draw hundreds of people, but they don’t alleviate the pressure at the Richmond campus. The Houston campus offers a Sunday night service, where Kelley preaches. Currently, about 135 people show up—people outside of the faith who are eager to experience the music. Following worship, Kelley sits down for coffee with attendees so he can get to know them.

Though Fort Bend County is an affluent community, pockets of extreme poverty are tucked here and there. So five years ago, River Pointe created a ministry called Attack Poverty with the purpose of ending generational poverty in the area. The church offers job training and placement, educational mentoring and after-school programs.

Affluent families don’t want for food, clothing or shelter, but they can struggle to recognize a need for Jesus because they don’t feel anything is missing from their lives.
It’s often children’s ministry that connects with both socioeconomic extremes. “It’s a doorway into homes,” says Kelley, “because parents want their children to know God even if they don’t.”

From Outreach Magazine  40 Ways to Increase Baptisms in 2017

If moms and dads see their children’s faces light up with God’s love, they realize that they’d like to experience that kind of love, too.

“This is a safe place to process your doubts,” explains Kelley, who promises that anyone can show up at River Pointe and not feel lost or left behind. “No matter how much or how little you’ve been at church, we’re going to challenge you at the point where you are rather than trying to get to you to the point that we are.”

So whether you’re a believer, a searcher or simply a fan of rock-and-roll music, the folks at River Pointe are eager to meet you.

“Everybody’s got a story,” says Kelley. “We want to hear yours.”