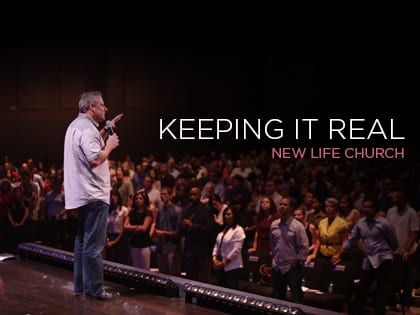 Rick Bezet, lead pastor of New Life Church in Conway, Ark., wrote a book called Be Real: Because Fake is Exhausting. The book was born from his own experience in Bible school where he learned to act spiritually superior and always remain the strongest one in the room.

“I remember thinking, ‘Wow, ministry sounds miserable,’” recalls Bezet, who did as he was told and hid all of his personal problems from the outside world. So when he and his wife started fighting, nobody at church knew. One day as he was preparing his sermon, he got into a heated argument with his wife. Seconds later, he heard her crying in the other room. He apologized and she asked him, “Who are you? Were you real when we were dating? Are you real when you preach?”

Bezet went back into his office and heard the Lord say, “Your wife forgives you and so do I. But when you speak to your congregation, you need to be honest.” Bezet froze. No way did he want to be that real, that raw. He decided to stick with what he had been taught in Bible school and maintain the happy facade. But halfway through the sermon that weekend, he had a change of heart.

“It hit me that I had the ability to fake my relationship with the Lord,” says Bezet. “That bothered me.” Right then and there, he started being real with his congregation—laughing with them, crying with them, connecting with them.

Bezet mentions that people in the early churches of the New Testament “met with sincere hearts.” The result of that sincerity was daily growth (Acts 2:46).

“When people are in an authentic community, they feel comfortable bringing their friends to church,” says Bezet, who notes that the average church member brings an unchurched person with them to church only once every 18 months. When a church starts growing, the average invite is extended every six to seven months. At New Life Church, members invite others every 45 to 60 days.

The Barna Institute did a study of 30 million people that listed the top five reasons people don’t like church. The number one reason: “because our kids don’t like it.” We live in a child-centric world where kids choose the vacation destination, the restaurant and apparently the worship venue.

“When families load into the car following church, parents ask their kids if they liked the service,” says Bezet. “If the answer is ‘no,’ parents won’t return, even if they, themselves, were pleased. And you can flip that. If parents hated the church but the kids loved it, there’s a good chance they’ll come back.”

This is why children’s—and youth—ministries are so important. Bezet maintains that reaching the generation of youth and teens is critical for a church’s survival. At New Life Church, the youth serve in every capacity on Sundays. They greet at the door. They help in the children’s ministry. They make coffee. They work the information booth. They’re an integral cog in the worship wheel.

“When you let the youth group permeate on a Sunday morning, it changes everything,” says Bezet. They’re serving. They’re caring. They’re connecting. So that when they graduate, they stick around because it’s where they’re comfortable.”

The vision for New Life Church is to have 50 campuses in Arkansas (they currently have ten). Their Conway and Little Rock campuses share a similar demographic—both are college towns with educated professionals. But they’re starting to branch out into multiethnic, multigenerational, multiclass communities. It’s something that Bezet is excited about.

Why? Because they’re keeping it real.