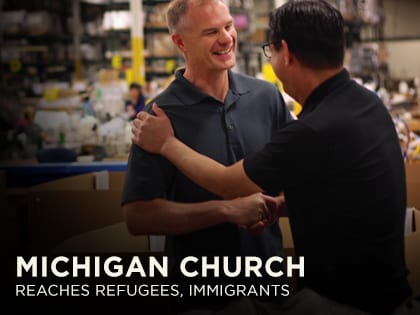 From All Over the World: LifeQuest Church in Zeeland, Michigan ministers to factory employees from 17 different cultures.

Four years ago, Pastor Tony Gruppen was on a mission trip in Russia when a gentleman grabbed Gruppen’s hand and told him, “If you remain humble, God’s going to bring people from all over the world and they will be sent out.”

These words didn’t mean much at the time but it turns out they foreshadowed LifeQuest, the church Gruppen pastors in Zeeland, Michigan, which meets in a manufacturing facility that employs people from 17 different cultures.

“I recently met with a group of employees—all refugees and immigrants of Bhutan—who are Hindu. Following that meeting, I walked with a Muslim from Morocco and we passed a Vietnamese worker,” recalls Gruppen. “I welled up with tears when it suddenly hit me that people from all over the world are here, just as the man in Russia had said. It was a fulfillment moment.”

LifeQuest is a church plant started from Christ Memorial Church in Holland, Michigan. Six years ago, a team there had a vision for a new church start. One of the team members, Doug Buma, is president of Integrated Fabric Resouce (IFR), a manufacturing facility that had office space for lease. It had been on Buma’s mind to have a chaplain for his employees at IFR so he offered the space to LifeQuest and a chaplain position to Gruppen.

“We have a missional heart and choose to invest in relationships rather than buildings,” says Gruppen. “Every day we have interfaith dialogue with Hindus, Buddhists, Muslims, atheists.”

LifeQuest holds regular Sunday worship services with average weekend attendance around 100. The church also hosts Bible study and discipleship groups as well as English as a Second Language classes, citizenship classes and financial literacy for employees. In addition, on the last Sunday of the month (called “Sending Sundays”), congregation members go into the community to serve.

“God is always on the move. It’s surprising to see how he draws people and organizations together,” says Gruppen. “LifeQuest wants to be a part of that creative work.”