Home Features Leaders by Design: Preparing Your Church for Its Highest Priority 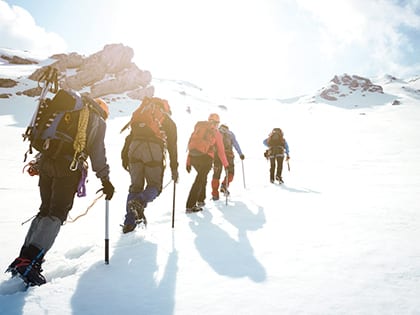 “Job No. 1 for pastors and ministry leaders is not preaching, counseling or sharing the gospel—it’s preparing believers to do so.”

Think of the leaders in your community. Where did they learn their skills? Summer internships? The military? Wall Street? The latest Harvard online course?

Eric Geiger and Kevin Peck claim that the most successful producer of leaders should be your local church.

Surprised? Who is called to be a leader might surprise you too. It’s everybody.

Whether male or female, young or old, you are designed by God to be a leader, and the local church is called to be your training ground.

“The church is designed by God to create leaders for all spheres of life,” Geiger and Peck write in their book, Designed to Lead: The Church and Leadership Development (B&H, 2016). Christians are not called to simply follow Christ, but to invest in others and draw them to Christ. And that takes leadership skills.

A Crisis of Leadership Development

There’s a hole in the picture, though. This leadership-development-in-the-church thing doesn’t seem to be happening much.

“There’s a crisis in local churches,” says Geiger, who is a vice president at LifeWay Christian Resources and holds a doctorate in leadership and church from Southern Seminary. “Just this week I was at an event where people were saying, ‘Gosh, I was asked to make [leadership] recommendations, and I can’t think of anyone.’”

It’s not just a case of needing to beg folks to teach a Sunday school class or work with children. “Every Christian is called by God to be salt and light in the world,” he says. “We need to be equipping people to live out their faith in all kinds of contexts.”

Geiger and Peck, lead pastor of The Austin Stone Community Church in Austin, Texas, pull no punches in the book.

“Most churches merely exist to keep running their programs and services. They are not developing leaders intentionally and consistently,” they write. “Our pews and folding chairs stay warm with immobile, uninspired, ill-equipped saints. Our churches, homes and places of work lack the leadership of Christian men and women.”

The two authors are calling for a radical change, and they’ve devised a framework they believe can motivate the vision, risk-taking and faithfulness required to make it happen.

Geiger and Peck take a broad definition of leadership. “We want the church to raise a myriad types of leaders, a plethora of leaders. We approach it as influence,” says Geiger. “If you’re a mother or father, you’re influencing your family. If you’re a small-business owner, you have enormous impact on staff and customers … Our impact is so much broader than we can imagine.”

Like good preachers, they have crafted their message into three parts and alliterated them with three C’s: conviction, culture and constructs.

Churches that consistently produce leaders have a strong conviction about the primacy of equipping and coaching. This conviction is held throughout the congregation; it’s not just a senior pastor’s unilateral directive. As a result, these local bodies have a healthy culture that supports leadership development. And they employ systematic constructs—plans and strategies—to intentionally build, nurture and send out Christlike leaders.

What do Geiger and Peck mean by conviction?

“Developing leaders must be a burning passion, a nonnegotiable part of the vision of a local church or it will never become a reality,” they write.

For fueling that burning passion, Geiger and Peck return to the Garden of Eden. They point to Genesis 1:26-28 and its mandate for us:

A deep understanding of this reflect-replicate-cultivate mandate is essential for nurturing the conviction needed for equipping believers toward spiritual maturity. Our talents, skills, passions and identities aren’t for ourselves, Geiger and Peck remind us. They’re tools to employ in Christlike sacrifice for the healing of a fallen world full of broken people.

“God, in his sovereignty, actually commended you to the world and said, ‘Look at him if you want to know what I look like,’” says Peck. “You are an ambassador for God. You may be a good one or a bad one, but you are one.”

Being cultivators is also other-directed. “The whole point is to make the world a place where everyone would flourish,” says Peck. “So we tell people, that whatever garden God’s given you—whether a work cubicle or a neighborhood or a city in Colombia, you’re supposed to make the place around you a place where others will flourish.”

Of course, individual Christians trying to enact the Garden of Eden mandate can’t do it alone, and they aren’t supposed to try. Geiger and Peck point to the apostle Paul’s instruction in Ephesians 4:11-13 as support for the claim that job No. 1 for pastors and ministry leaders is not preaching, counseling, visiting the sick or sharing the gospel—it’s preparing believers to do so.

From Outreach Magazine  Is Your Marriage Deep Enough to Support Expanding Ministry?

In other words, a healthy church isn’t one where the pastor does everything, but where the pastors and other ministry leaders equip the saints to do anything. If that’s not happening, the effect is deeply detrimental, say Geiger and Peck. It creates followers, not leaders. It communicates that only “professionals” can do the task (and all we need to do is pay them). It encourages a culture of consumption and performance, and creates a fake dualism between elite “spiritual” work and second-class “secular” work.

This model isn’t true to Christ, either. “The local church was built to follow Jesus, the very picture of radical risk-taking to rescue and redeem people,” write the authors. Instead of compliant congregants, “the kingdom needs more mavericks.”

The biggest loss in an unhealthy church is the lack of growth of believers. In churches that have a healthier approach to ministry, all believers are considered gifted for ministry, not just the “professionals.”

“The Scripture never uses the term ‘minister’ to set aside a special class of people who serve other Christians,” they write. “All believers are ministers. Thus those selected by the Lord to be pastors are to invite all believers to engage in ministry and view themselves as equippers of all the ministers, all of God’s people.”

Not only are God’s children called to lead, they’re called to lead everywhere. “Just as our churches flourish under great leadership, other organizations and communities are designed to flourish under godly leadership,” they write. “What an incredible difference it would make if believing pastors, doctors, educators, politicians, teachers and government workers led with Christ’s kingdom in mind. What if we didn’t wait for our people to go to university or even seminary to learn to lead, but instead they learned to lead in God’s church?”