Home Features Special Report: The Bible and the Church 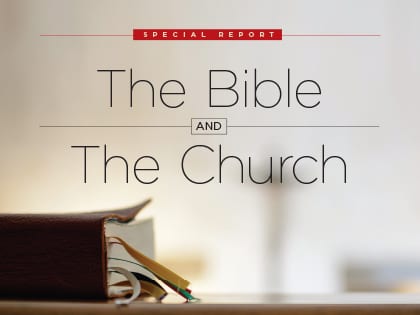 “If indeed the Scriptures are ‘God-breathed,’ when you take away the breath, you’re left with what humans can produce.”

Kenneth A. Briggs grew up in a hardscrabble factory town in Massachusetts. Even as a kid, he was enthralled by a sense of transcendence when the minister intoned Scripture from the pulpit’s gold-trimmed, “supersized King James Bible.”

“The dawning of a bigger picture of what life could be and should be was the most influential gift I ever received, and I owed it to the Bible,” writes Briggs in The Invisible Bestseller: Searching for the Bible in America (Eerdmans, 2016).

Briggs, a former religion reporter for The New York Times, grew to understand that the teachings of God’s Word shaped the essence of America, “beckoning us as a people to be good, and speaking to the heart and purpose of life,” he says in an interview. But he also has become painfully aware that the culture, on the whole, has turned away from the Good Book.

We are a country with a weakening comprehension of the Word of God. And the church—called to engage the culture with the good news of God’s redemptive love—isn’t in much better shape by most accounts.

Skeptics on the Rise

Ironically, if sales were a good measure of attitudes toward the Bible, one might be tempted to doubt there were a problem.

The Bible is historically the best-selling book of the year, every year. Annually worldwide, 100 million Bibles are sold or given away. In the United States last year, an estimated 25 million Bibles were sold, and that doesn’t count copies given away or purchased through agencies or nonprofits. Almost 90 percent of Americans have a Bible in their homes, according to a 2015 Barna Group report, and many have more than one.

Those statistics don’t count versions of Bibles on smartphones and iPads. For example, the YouVersion Bible App has been downloaded on more than 264 million devices worldwide.

But despite stunning sales, there’s no denying the deterioration of the Bible’s status in Western culture.

“The crisis, as I see it,” Briggs says, “is that the foundational source of what was once a common theological, philosophical and ethical set of beliefs and values is being neglected, and little—except secular values like success, status and money—is filling the gap.”

Briggs traveled across the country for two years gathering material for his book. “Many people simply don’t any longer think they need the Bible to fulfill their ambitions,” he says.

To illustrate: The percentage of Americans who view the Bible as sacred literature has dropped from 86 percent to 80 percent, according to State of the Bible 2016, a joint report from the American Bible Society and the Barna Group. A third of Americans no longer believe the Bible is a sufficient guide for meaningful living. And the percentage of those who view the Bible as just a book of human writings, rather than the inspired Word of God, grew during the past six years, from 10 percent to 22 percent.

It’s true that most Americans still have some level of respect for the 66 books of the Old and New Testaments, even if they don’t read them. However, skeptics are on the rise and gaining ground.

Consider non-Christian, American millennials (those born between 1984 and 2002): Nearly half (45 percent) believe the Bible is just a book of advice and stories, according to another study by Barna. Almost 27 percent go further and say the Bible is a dangerous book used for centuries to oppress people.

Decades of materialism, moral relativism, a waning trust in authority and a desire for instant gratification have created very choppy waters for the Bible to navigate. Throw in the decline of reading in general, and the explosion of 24/7 media, personal technology and social media—and America is flaying in a perfect storm of biblical illiteracy.

A question for American evangelicals, then, is how much does this ignorance and disdain spill over into the church? And what are the ramifications when it comes to evangelism, discipleship and cultural engagement?

In an opinion piece published last year on FoxNews.com, Jeremiah Johnston, president of the Christian Thinkers Society, bluntly declared that “the evidence is overpowering that contemporary Christianity is Bible-ish, at best, and at worst, in some cases Bible-less.”

Of course, it depends on where you’re looking. Although just one-third of Americans profess, in that same State of the Bible 2016 report, to read the Bible at least once a week, the majority of Americans (62 percent) express a desire to read the Bible more often. Of respondents who claim Christian faith (both Protestants and Catholics), 45 percent agree that the Bible contains everything a person needs to know in order to live a meaningful life.

However, that figure was 53 percent just five years earlier. And strikingly, among teenagers, 37 percent say they never read the Bible.

“Biblical illiteracy is a horse that’s left the barn,” says Larry Osborne, one of the senior pastors of North Coast Church, 30 miles north of San Diego in Vista, California.

Osborne, who’s led the church almost since its inception in 1980, is committed to reaching a post-Christian culture—which means he and his staff have been forced to change tactics. They assume anyone under the age of 40 in the 12,000-member multisite congregation has little or no Bible knowledge.

“Our sermons are definitely slightly longer. You have to lay down the biblical text first, then address the ‘so-what,’” says Osborne, who is careful to use plain language and avoid religious jargon.

Of course, there’s more to being biblically literate than knowing Adam from Zacharias. Not grasping the divine “metanarrative”—God’s overarching message of love and his plan for humanity culminating in Jesus Christ—contributes to a faulty understanding of reality, say experts. Only 1 in 5 Christians in the American church today has a biblical worldview, according to Barna Group.

From Outreach Magazine  Births to Muslims Will Outnumber Births to Christians by 2035, Study Finds

An example of this, says Gregory Koukl, is Christians’ “inability to answer the two toughest challenges of life: the problem of evil, and why Jesus is the only way.”

Reflecting the greater society, Christians “are largely driven by feelings rather than sound thinking,” says Koukl, founder and president of the apologetics organization Stand to Reason.

“For example, when it comes to the crucial questions of orthodox Christianity, most teens just shrug and say ‘whatever,’” says Koukl, whose most recent book is The Story of Reality: How the World Began, How It Ends and Everything Important That Happens in Between (Zondervan, 2017).

Says Paul Caminiti, a former Bible publisher at Zondervan and executive at Biblica: “Most would agree that lack of Bible engagement is directly linked to anemic Christian faith. If indeed the Scriptures are ‘God-breathed,’ when you take away the breath, you’re left with what humans can produce—better marketing, impressive architecture and oratorical skills. But these alone don’t grow flourishing churches.”

So what’s to be done?

J.D. Greear, pastor of the Summit Church in Raleigh-Durham, North Carolina, says the church needs to look at its priorities. “If we don’t focus on teaching our people the Bible, what are we doing?” he says. “How can we possibly say we’re preparing our people for the trials of life? When Satan attacked Jesus, Jesus quoted Scripture.

“I want our people to bleed God’s Word, too. I want to see our people—our kids, our families, our college students, our retirees, our stay-at-home moms—so saturated with Scripture that they can’t help but talk about it, share it and apply it. If there’s one thing our people know, let’s make that one thing the Bible.”

“I think when preachers model the excitement of new discovery in studying the Bible, often augmented with background information people wouldn’t be familiar with on their own, it can inspire other believers to dig in to their Bibles and enjoy learning,” says Keener, professor of New Testament at Asbury Theological Seminary and the author of The IVP Bible Background Commentary: New Testament.

“Whetting people’s appetites is the first step,” Keener says. “For exploring the Bible on their own, however, they have to take one step beyond appetite and actually discipline themselves to carve out time in their often-busy schedules to devote to Scripture.”