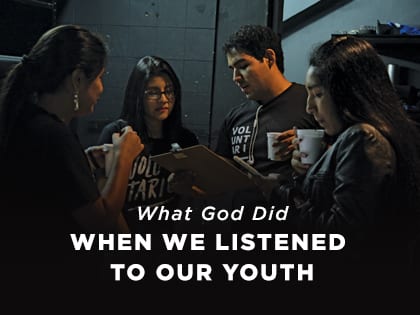 Camino de Vida church in Lima: “Don’t be afraid of change. If it isn’t working, why keep doing it?”

Robert Barriger understands the importance of young people feeling welcome at church. He came to faith in Christ as a young adult, during the Jesus Movement in Southern California. “I was one of those hippies reached by a church of 40 to 50 people just off the Pacific Ocean,” Barringer says. “We’d go surfing and come in from the beach bringing new friends we’d invited, leaving wet marks on the pew from our swim trunks. The wonderful people in that church received us as we were.”

The pastor, Ralph Moore, challenged those young converts to go out and change the world by starting new churches. Barriger said yes to that call.

Fast-forward to 1988 in Peru, where Barriger had become a missionary, helping national churches plant about 80 churches over the previous five years. But now violence was on the rise in Peru, and 10,000 young people were leaving the country each month. The Shining Path Communist Party was the ISIS of the 1980s and considered the cruelest terrorist group in the world. By 1988, Barriger couldn’t travel, even to visit churches he had planted. Christians were killed and pastors were martyred.

“I went into a time of fasting and prayer,” he reflects. “As I prayed to God about the youth of Peru, I kept asking, ‘What needs to be in place for a youth movement like I experienced under Ralph Moore?’” He remembered traveling with Pastor Ralph to a church at the center of the Jesus Movement, watching how the pastor there handled objections to barefoot people. “The day when concerns about our nice carpet keep people from coming to this church, we rip it out,” that pastor had said. Could a similar attitude be found or developed in Peru?

Barriger talked with a lot of pastors. Many said they wanted to receive more young people, but too few were willing to make the adjustments necessary to make youthful new Christians feel welcome. In one of Barriger’s explorations, he asked permission of a popular radio station to play Christian rock music for an hour a day, something new to Peru at the time. It was so well-received that, three months later, Radio Miraflores had expanded to seven hours daily.

Many teens got saved but wouldn’t come to church. They didn’t feel accepted. So Barriger invited them to be part of a solution. Those who had given their hearts to Christ were soon giving testimonies in schools. Eventually they formed a new church led by Barriger, known today as Camino de Vida (“Life Mission,” or literally, “Way of Life”). It’s based in Lima, by far Peru’s largest city.

Today, almost three decades after its founding, Camino de Vida is a vibrant, multisite church with 26 services a weekend across six campuses, three booming youth groups, dynamic worship bands, world-class creative arts ministries and active outreaches through an orphanage, humanitarian-aid programs and more. A typical weekend sees an attendance of about 9,000 in worship, plus 8,000 more in groups or other meetings.

“We never came to Peru with the intention to plant a church but to help existing churches plant other churches,” Barriger says. “God did this. Our church exists to respond to those who say, ‘It can’t happen here.’ Our response is to say, ‘Look what God can do!’”

Barriger outlines several principles that have worked in Lima and could be instructive to North American churches:

1. Pray for God’s leading in how to connect with youth, and then bury yourself in the culture.

At all costs, avoid a situation where people see a difference between the message and the messenger. Missionaries, Barriger feels, have sometimes created unintentional divisions: I teach, you listen; I eat this, you eat that; I live here, you live there. Barriger’s models are highly incarnational missionaries like William Carey and Jonathan Goforth. “Bridges of understanding are the best way to win hearts,” he says.

2. Remember that how you win them is how you keep them.

“Jesus’ way of saying this is, ‘You can’t put new wine in old wineskins,’” he says. Help them grow in a setting similar to how they found Christ. “People don’t reject Jesus but tradition and methods that are outdated,” he says.

3. Let your youth bring their parents to church.

From Outreach Magazine  The Importance of Small-Town Ministry

“We are one church with many rooms,” Barriger says. “We offer lots of pathways for leadership development.” Many start with small groups. “There’s nothing greater than connecting people into a small group with friends, and then development happens,” he says.

5. Look for those who are willing to be stretched.

“We say, ‘If you want to get into leadership, we’ll find you on the second mile—doing something extra, and people are gathering around you.’” Barriger tends to grab those people and pull them into a mentoring program. At present the church has roughly 150 full-time students in a two-year intensive internship. They get both theology and a lot of practical application. “By the end of that process, we’ve helped them find out what they’re good at. If there is a noticeable pastoral gift, they go into leadership,” he says.

His final advice affirms that the gospel is unchanging, but methods constantly need re-evaluating, including those he suggests. “Change is the only constant in life,” he says. “So don’t be afraid of change. If it isn’t working, why keep doing it?”