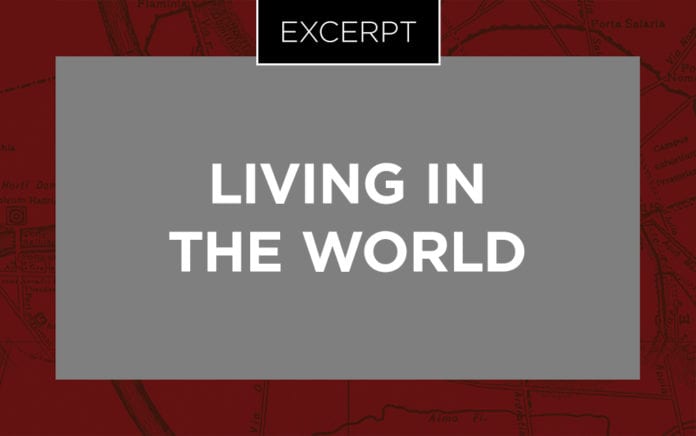 Though pagan cultures had an understanding of some manner of life after death, the Christian conception of eternal life is unique.

Excerpted From
Pagans and Christians in the City
By Steven D. Smith

Living in the World

In the pagan conception, the gods’ assistance is sought in the pursuit of a variety of this-worldly goods. Life. Health. Wealth and power. Glory and fame. Peace. Happiness. These are by and large the same kinds of goods that the “interest-seeking conception” of the person that we looked at in chapter 2 recognizes as the desiderata that govern human pursuits and that inform the instrumental reasoning by which personal and public decisions are made.

Christianity recommended a complex but fundamentally different attitude toward these goods. It did not deny their goodness. The world, once again, is a creation of the true God, and hence good; its pleasures and beauties are genuine goods. But they are not the ultimate good. That more ultimate good is something often described as “eternal life.” To this the worldly goods needed to be subordinated; otherwise they would lose their goodness.

“Eternal life.” The term recurs repeatedly in the New Testament to describe the goal and reward of Christian faithfulness. The Apostles’ Creed repeats the theme: “I believe in … the life everlasting.” For his part, Augustine over and over emphasized that “eternal life is the Supreme Good.”

And what is “eternal life”? For Christians, the term connoted two things. As its literal meaning suggests, it meant life that goes on forever—that continues or resumes after death in a physical resurrection. But eternal life also meant something like the life of and with God, the Eternal. “For, impelled by the desire of the eternal and pure life,” Justin Martyr declared, “we seek the abode that is with God, the Father and Creator of all.”

In both respects, the Christian orientation contrasted sharply with paganism. To be sure, many Greeks and Romans surely hoped for some sort of existence beyond the grave. And some of the so-called mystery cults did seek to prepare their initiates for life in the next world. Even so, as the historian John Scheid explains, the mystery cults were not “religions of salvation and spirituality.” “The well-being or salvation sought by these cults was of a nature just as material as that offered by the traditional cults: it had to do with this world, the here and now. True, they showed that death was not an evil, and offered hope for the beyond, but above all they set out to achieve a happy life in this world and possibly even to prolong it and help the deceased after their deaths.”

Scheid concludes that “there is no similarity between these cults and Christianity. They conveyed no message of triumph over death nor did they offer any fundamentally new revelations.” In particular, pagans rejected the idea of physical resurrection and of a final judgment. Indeed, Guy Stroumsa observes that this was “one of the characteristics of Christianity that would repel intellectual pagans the most.”

In addition, while hoping that the gods would assist them in achieving the goods of this world, pagans typically did not imagine any higher good—anything like union with the gods—that transcended earthly flourishing. For pagans, the goods of this world—of the here and now—would be, so to speak, as good as it gets. By contrast, Christians looked for a blessedness that “eye hath not seen, nor ear heard, neither hath entered into the heart of man.” Once again, it did not follow that for Christians the goods of this world were not authentic goods. But if they were pursued as the ultimate goods, then they would, paradoxically, lose their goodness and turn to evils.

The idea is tirelessly and eloquently elaborated as the central theme of Augustine’s Confessions. The spiritual autobiography relates how, as a boy, Augustine is immersed in childish games, and then in sexual adventures and carousing with friends. Slightly later, as a talented and ambitious young man, Augustine leaves his provincial African town and travels to Rome and Milan in search of prosperity and eminence. Sexual gratification continues to be important to him (bk. 5).

Gradually, however, he becomes convinced, at least in the abstract, that wisdom is to be preferred to sensual gratification. This conviction is reinforced by the sudden death of a dear companion. As friends, they had enjoyed everything together; now everything reminds Augustine of what has been lost beyond hope of recovery. “My heart was utterly darkened by this sorrow,” he recalls, “and everywhere I looked I saw death” (4.9, p. 51).

Generalizing, he concludes that “every soul is wretched that is fettered in the friendship of mortal things—it is torn to pieces when it loses them, and then realizes the misery which it had even before it lost them” (4.11, p. 52).

Nonetheless, thoroughly immersed in careerism and the gratifications of sexuality, Augustine finds it difficult to relinquish the pursuit of these mundane goods. Even after he becomes intellectually convinced of the truth of Christianity, the allure of the world is strong. “But wait a moment,” he tells himself, resisting conversion.

“This life also is pleasant, and it has a sweetness of its own. … We must not abandon it lightly. … See now, it is important to gain some post of honor. And what more should I desire? I have crowds of influential friends, if nothing else; and if I push my claims, a governorship may be offered me, and a wife with some money. … This would be the height of my desire. … I talked about these things, and the winds of opinions veered about and tossed my heart hither and thither.” (6.19–20, p. 99)

Sexual gratification in particular is difficult to forswear. “Lord, make me chaste,” Augustine famously prays, “but not yet” (8.17, p. 139).

From Outreach Magazine  What Gen-Z Women Need From Your Church

Eventually, though, in part through study and mystical experience, and in part through the influence and example of prominent Christians like Ambrose, the eloquent and erudite bishop of Milan, and Victorinus, a philosopher and Christian convert, Augustine is able to embrace the Christian faith more fully. That faith points him to a higher good—eternal life, or union with God—that is fulfilling, not shallow and transitory in the way earthly goods are. This new understanding culminates in a mystical experience that Augustine enjoys with his mother, Monica, shortly before her death. Mother and son are “discussing together what is the nature of the eternal life of the saints: which eye has not seen, nor ear heard, neither has entered into the heart of man.” Their conversation gradually brings them “to the point where the very highest of physical sense and the most intense illumination of physical light seemed, in comparison with that life to come, not worthy of comparison, even of mention” (9.23–24, p. 163). Looking back on the experience, Augustine would recall that “this world, with all its joys, seemed cheap to us even as we spoke.” And he would add: “If this [experience] could be sustained, … and … should so ravish and absorb and envelop its beholder in these inward joys that his life might be eternally like that one moment of knowledge which we now sighed after—would not this be the reality of the saying: ‘Enter into the joy of thy Lord’?” (9.25–26, p. 164).

And yet the worldly goods, once again, are authentically good. “Now there is a comeliness in all beautiful bodies, and in gold and silver and all things. The sense of touch has its own power to please and the other senses find their proper objects in physical sensation. Worldly honor also has its own glory, and so do the powers to command and to overcome. … For these inferior values have their delights, but not at all equal to my God, who hath made them all. For in him do the righteous delight and he is the sweetness of the upright in heart” (2.10, p. 25).

In short, Christians were—are—faced with a delicate challenge. They must live in the world, rejoicing in its beauties and blessings; in that respect, their mode of life seems not so different from that of the pagans. And yet they must not forget that the ultimate good is God, not the world, and that this world is not their true home.