Home Resources Books Sharing Jesus’ Love (and Not Our Own Agenda) 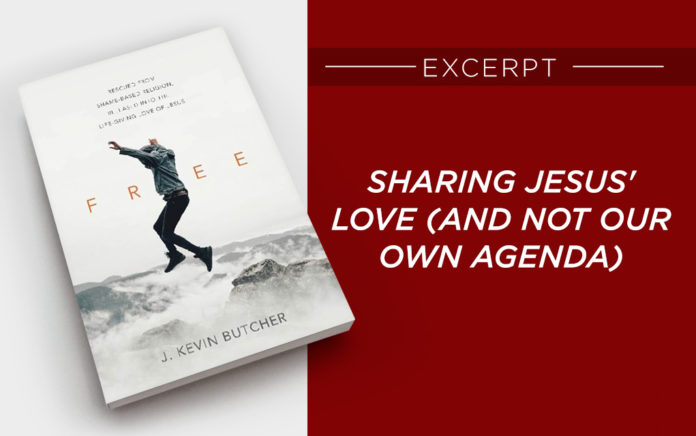 Excerpted from ‘Free: Rescued from Shame-Based Religion, Released into the Life-Giving Love of Jesus’ (NavPress)

A few years back, in preparation for a talk on parenting, Carla and I emailed each of our grown daughters the question, “What stands out about the way we raised you that helped you believe in Jesus’ love for you and eventually to put your faith in him?” The list was encouragingly long—“daddy-daughter dances, letting us climb in bed with you during a thunderstorm, seeing you fight through things in your marriage, allowing us be ourselves, knowing you were always available”—and more. But at the end of her list, my middle daughter Leigh Anne said, “Mom and Dad, more than anything else, today I follow Jesus and know that he loves me because when we were kids, you both showed me that you knew Jesus really loved you.”

Listen, I bought my girls their first Bibles, took them to youth group, prayed with them every night, and had theological discussions with each of them about everything from the creation of the universe to Jesus coming back from the dead to “Hey Dad, how do we know what we believe is right?” All of it helped them find their way. But don’t miss this: Leigh Anne eventually believed in Jesus and his love for her because she saw Jesus and his love even in our very imperfect lives. The power of the good news of Jesus Christ in the abiding life.

What then moves us to share Jesus in the first place is not guilt or shame but rather our love relationship with Jesus. In the freedom of loving him, we can release the false guilt of “not knowing enough,” the fear of not having “the right answers,” and especially the need to convince anyone of anything. His love creates a love and compassion for others and a passion to share him that cannot be stopped.

There’s nothing intrinsically evil about scheduling a time to share the good news. Many campus ministries organize spring-break trips with a goal of hitting the beach and speaking truth about Jesus to as many people as possible. And because the good news is powerful in any form it’s presented, some will believe. But this way of sharing Jesus reminds me more of trained cold-call salesmen and women going door to door, looking for buyers. At best, it feels unnatural and more confrontational than relational—and makes it more difficult to communicate the love we may genuinely feel.

Jesus’ “heart broke” over the crowd gathered on a Galilean hillside because they were “like sheep with no shepherd” (Mark 6:32–34). He wept over Jerusalem because his brothers and sisters were drowning in their sin and pain (Luke 19:41). This I know—when our hearts break for those who don’t yet believe, shame-based, structured evangelism becomes obsolete. Sales personnel eventually get tired and quit. Jesus’ love moves his followers—a Kingdom army of lovers—to really see … and to share his good news with anyone, anywhere, anytime. All the way home.

The truth is, if we share Jesus Christ for any other reason than because we’re moved by love for him and for the person with whom we’re sharing, they will sense it and often will reject him because they feel like a recruit, a statistic, a “mark.” A few years ago, I became friends with a Muslim sister, and for a time, we met regularly over coffee, discussing everything from family to the state of world affairs to religion. I’m ashamed to say that slowly, insidiously, I began to see my friend as someone to convert. Instead of allowing Jesus’ love in me to produce a deep, long-term love for her—whether she ever believed in Jesus as Messiah or not—I began to get impatient, a sure sign of fading love (1 Corinthians 13:4, nlt). One day, as we were talking, I thought I saw an opening and tried to gently move her toward Jesus. My friend sensed I was trying to “save” her, and she was angry … but most of all, she was hurt. “Kevin,” she interrupted, “I know what you’re doing. I hope this isn’t the reason why you’ve been meeting with me. I’m not going to become a Christian, so you need to stop.” I had neither said nor done anything obvious—but my friend discerned an agenda other than love. After that day, we drifted apart and never spoke again. It broke my heart.

From Outreach Magazine  Redefining Healing in the Context of Mental Health

Abiding, making our home in God’s love, is the unstoppable catalyst for sharing Jesus authentically and without agenda. But many of us still wonder, Exactly what does someone need to know about Jesus in order to believe in him? It’s a difficult question to answer. How many details about my life—who I am and what I have done—would be necessary to communicate the essence of me? The same dilemma occurs when we share the person of Jesus.

My four-year-old Andrea was in the car with me when I dropped off a church leader at his home and said, “Take care, my brother.” She immediately chimed in, “Daddy, he isn’t your brother!” and I explained that we were special brothers because we both believed in Jesus. Without hesitation, her tender heart responded, “I believe in Jesus, Daddy!” I was overwhelmed with joy—but of course, wanted to make sure she wasn’t simply saying what she thought her daddy wanted to hear. After a few questions, I was convinced that my little girl at some point before that moment, had quietly, without fanfare or formality, genuinely believed in Jesus. Her confession of faith was one of the greatest moments of my life.

But here’s the deal: When Andrea believed, she didn’t understand the Trinity, that Jesus was God in the flesh, what original sin was, or what the Cross meant. She wasn’t even trying to figure out how to go to heaven! Andrea knew Jesus was good and kind and that he loved her—and somehow figured out she didn’t just want him but needed him in her four-year-old life. Then, one day, my Andrea—out of the need she felt—believed in the Jesus she understood. Can you imagine Jesus saying, “Oh, sweetie, you can’t believe in me quite yet—there’s so much more you need to know about me before you can enter my Kingdom”? In fact, Jesus said quite the opposite. One day, with a little girl like Andrea in his arms, he pointedly remarked to his disciples, “Unless you accept God’s kingdom in the simplicity of a child, you’ll never get in” (Mark 10:13–16).

Ultimately, the gospel that is Jesus is the story of God loving us so much that he entered history in Jesus to deliver us from sin and death. Paul’s words take my breath away: “He has rescued us from the kingdom of darkness and transferred us into the Kingdom of his dear Son, who purchased our freedom and forgave our sins” (Col. 1:13–14). So, yes, the virgin birth, his miracles, the Cross, and the empty tomb and more are a part of the story that is Jesus. Nevertheless, our faith in everything Jesus did in his earthly ministry isn’t what saves us. Faith in Jesus saves us! At the precise moment of believing, we may know a great deal about Jesus’ person and work—or, like Andrea, we may know nothing more than that we need him. This, my friends, is the delicious, powerful, life-giving freedom of the good news: “For this is how God loved the world: He gave his one and only Son, so that everyone who believes in him will not perish but have eternal life” (John 3:16).

Excerpted from Free: Rescued from Shame-Based Religion, Released into the Life-Giving Love of Jesus by J. Kevin Butcher. Copyright © 2021. Used by permission of NavPress. All rights reserved. Represented by Tyndale House Publishers, a Division of Tyndale House Ministries.