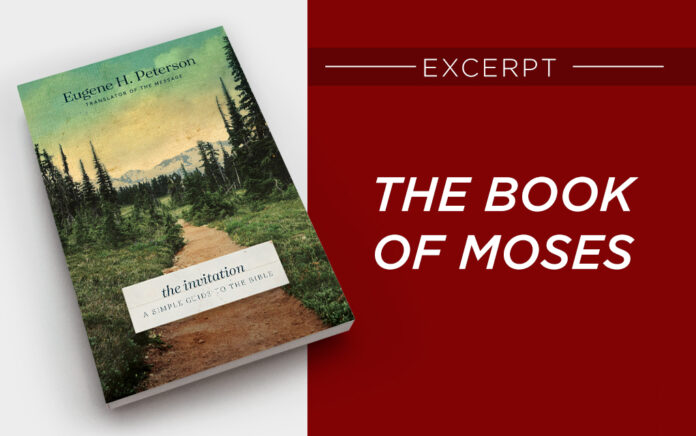 God is presented to us not in ideas and arguments but in events and actions that involve each of us personally.

An enormous authority and dignity have, through the centuries, developed around the first five books of the Bible, commonly known as the Books of Moses. Over the course of many centuries, they have prompted a truly astonishing amount of reading and writing, study and prayer, teaching and preaching.

The Books of Moses are made up mostly of stories and signposts. The stories show us God working with and speaking to men and women in a rich variety of circumstances. God is presented to us not in ideas and arguments but in events and actions that involve each of us personally. The signposts provide immediate and practical directions to guide us into behavior that is appropriate to our humanity and honoring to God.

The simplicity of the storytelling and signposting in these books makes what is written here as accessible to children as to adults. But the simplicity (as in so many simple things) is also profound, inviting us into a lifetime of growing participation in God’s saving ways with us.

The image of human growth suggests a reason for the powerful pull of these stories and signposts on so many millions of men, women and children to live as God’s people. We can sketch the five books as five stages of growth in which God creates first a cosmos and then a people for his glory.

Genesis is Conception. After establishing the basic elements by which he will do his work of creation and salvation and judgment in the midst of human sin and rebellion (chapters 1–11), God conceives a people. He will reveal himself to them—and through them, over time, to everyone on earth—as a God of salvation. God begins small, with one man: Abraham. The embryonic People of God grow in the womb. Gradually details and then more details become evident as the embryo takes shape: Sarah, Isaac, Rebekah, Jacob and Esau, Rachel, Joseph and his brothers. The pregnancy develops. Life is obviously developing in that womb, but there is also much that is not clear and visible. The background history is vague, the surrounding nations and customs veiled in a kind of mist. But the presence of life, God-conceived life, is kicking and robust.

Exodus is Birth and Infancy. The gestation of the People of God lasts a long time, but finally the birth pangs start. Egyptian slavery gives the first intimations of the contractions to come. When Moses arrives on the scene to preside over the birth itself, ten fierce plagues on Egypt accompany the contractions that bring the travail to completion: At the Red Sea the waters break, the People of God tumble out of the womb onto dry ground, and their life as a free People of God begins. Moses leads them crawling and toddling to Sinai. They are fed. God reveals himself to them at the mountain. They begin to get a sense of their Parent. They learn the language of freedom and salvation—a word here, a word there, the Ten Words (Commandments) as a beginning, their basic vocabulary. The signposts begin to go up: Do this; don’t do that. But the largest part of their infant life is God, the living God. As they explore the deep and wide world of God, worship becomes their dominant and most important activity. An enormous amount of attention is given to training them in worship, building the structures for worship, mastering the procedures. They are learning how to give their full attention in obedience and adoration to God.

Leviticus is Schooling. As infancy develops into childhood, formal schooling takes place. There’s a lot to know; they need some structure and arrangement to keep things straight: reading, writing, arithmetic. But for the People of God the basic curriculum has to do with God and their relationship with him. Leviticus is an almost totally audiovisual book, giving a picture and ritual in the sacrifices and feasts for the pivotal ways in which God’s people keep alert and observant to the ways their relationship with God goes awry (sin) and the ways they are restored to forgiveness and innocence (salvation). Everyday life consists of endless and concrete detail, much of it having to do with our behavior before God and with one another, and so, of course, Leviticus necessarily consists also of endless detail.

Numbers is Adolescence. The years of adolescence are critical to understanding who we are. We are advanced enough physically to be able, for the most part, to take care of ourselves. We are developed enough mentally, with some obvious limitations, to think for ourselves. We discover that we are not simply extensions of our parents and we are not just mirror images of our culture. But who are we? Numbers asks, Who are we as the People of God? The People of God in Numbers are new at these emerging independent operations of behaving and thinking and so inevitably make a lot of mistakes. Rebellion is one of the more conspicuous mistakes. They test out their unique identity by rejecting the continuities with parents and culture. It’s the easiest and cheapest way to “be yourself,” as we like to say. But it turns out that there isn’t much to the “self” that is thus asserted. Maturity requires the integration, not the amputation, of what we have received through our conception and birth, our infancy and schooling. The People of God have an extraordinarily long adolescence in the wilderness—about forty years of it.

Deuteronomy is Adulthood. The mature life is a complex operation. Growing up is a long process. And growing up in God takes the longest time. During their forty years spent in the wilderness, the People of God developed from their birth on the far shore of the Red Sea and were carried and led and nourished and protected under Moses to the place of God’s revelation at Sinai—taught and trained, disciplined and blessed. Now they are ready to live as free and obedient men and women in the new land, the Promised Land. They are ready for adulthood, ready to be as grown up inwardly as they are outwardly. They are ready to live as a free people, formed by God, as a holy people, transformed by God. They still have a long way to go (as do we all), but all the conditions for maturity are there. The book of Deuteronomy gathers up that entire process of becoming the People of God and turns it into a sermon and a song and a blessing. The strongest and key word in Deuteronomy is love. Love is the most characteristic and comprehensive act of the human being. We are most ourselves when we love; we are most the People of God when we love. But love is not an abstract word defined out of a dictionary. In order to love maturely we have to live and absorb and enter into this world of salvation and freedom, find ourselves in the stories, become familiar with and follow the signposts, learn the life of worship, and realize our unique identity as the People of God who love.

The Books of Moses are foundational to the sixty-one books that follow in our Bibles. A foundation, though, is not a complete building but rather the anticipation of one. An elaborate moral infrastructure is provided here for what is yet to come. Each book that follows, in one way or another, picks up and develops some aspect of the messianic salvation involved in becoming the People of God, but it is always on this foundation. This foundation of stories and signposts has proven over and over to be solid and enduring.

Excerpted from The Invitation by Eugene Peterson.