Home Resources Books Looking for Something to Live For 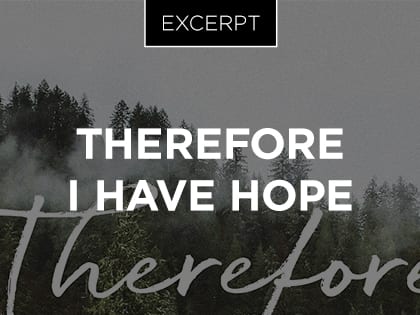 When my son died, I struggled to find a reason to continue living. Then God spoke to me.

Excerpted From
Therefore I Have Hope
By Cameron Cole

After the death of his son, Cameron Cole struggled to live through his worst nightmare. Here he talks about how serving the Lord and helping others helped him hang on.

HELPING OTHERS AFTER A TRAGEDY

A person can wish to die without being suicidal.

Anyone who has experienced tragedy knows this paradox.

You are miserable. A dark cloud follows you at all times.

You have no real intentions or active plans of taking your life, but the idea of a truck running you over sounds pretty attractive. You do not want to check out, but you know with certainty that you are not happy on earth.

At the center of this malaise resides the struggle to find anything to live for. You repeatedly wrestle with the question, “Is life worth living?”

I once traveled to a nation in Asia on a mission trip to share the gospel with people, most of whom had never heard of Jesus in any form. I went to lunch with a college student named Stephen in the days after a devastating earthquake in his country. I told him that good things can come out of natural disasters and related the story of how I became a Christian during a tornado.

After hearing the gospel, Stephen asked an insightful question: “If, in Christ, you are bound for a perfect place in heaven, why remain on earth?”

It was a logical line of reasoning. Here was a young man who had read of how tens of thousands of his fellow countrymen had died in the earthquake. His family and friends lived with ever-present anxiety since they dwelled within an hour of the epicenter. People slept on lawns and in fields for fear that their homes might collapse in an aftershock. In the gospel, Stephen was introduced to heaven, a perfect place of no worries, death or suffering. It made sense that an escape from the trials and anxieties of the world intrigued Stephen.

If one had a direct pathway to heaven through Christ, why not fast-track the journey there? If a person can escape from the trepidation and difficulty of the fallen world, why hang around this broken place?

In Tracks of a Fellow Struggler, author Reverend John Claypool, who lost his nine-year old daughter to leukemia, wrote, “Now that I am here, please stop the world; I want to get off!”

About one month after Cam died, I more deeply comprehended the painful totality of our loss. I felt as if I had entered into a dark tunnel that never ended. Meanwhile, the only hopeful thing I could conjure up was the idea of being in heaven with Cam. Given that statistics projected that I probably had anywhere from forty to fifty more years left on this earth, I felt trapped and struggled for meaning.

I wallowed along one Saturday, languishing in a depressed stupor. The cold, cloudy day resembled my mood as I pitifully plodded around for hours in my pajamas and unkempt hair.

I continuously asked the question, “Is life worth living?” and could not find a positive answer. At the end of the day, I sat in bed defeated. I simply did not want to be alive.

Nevertheless, the Lord made something clear to me that night that helped me turn the corner. I had spent a day thinking continuously about how I did not want to be alive, but God, in an almost mystical manner, planted this thought in my head: “So you don’t want to be alive, but do you really want to die?” God reminded me that he claims possession of my every breath and heartbeat. At any point, the Lord can call me home. As I lay there pondering the fragility of my life and the theoretical lack of guarantee I had for tomorrow, a sense of panic gripped me.

From Outreach Magazine  The World Is Asking Questions

God impressed this truth upon me in a manner that scared me. In a sense, the Lord called my bluff.

When the possibility of actually dying appeared feasible, a fear immediately set in.

Do I really want to die?

The motivations that instantly came to my mind exclusively related to eternal matters: serving God and loving people. There was something to live for. There were reasons to stick this life out, and they all pointed back to serving the Lord.

These aforementioned yearnings to leave the world may strike someone as unfaithful or un-Christian. However, even the most faithful of Christians wrestles with the existential question of whether life is worth living after tragedy.

The apostle Paul expressed these sentiments multiple times. He had endured continuous trials and pain during his ministry. Paul admitted in his second letter to the church at Corinth, “For we do not want you to be unaware, brothers, of the affliction we experienced in Asia. For we were so utterly burdened beyond our strength that we despaired of life itself” (2 Cor. 1:8). In modern terms, Paul effectively said, “We hated life.”

Within this anguish Paul cited a yearning to leave the pain of this world and a desire to enter into the pleasure of eternal glory. He later said in 2 Corinthians, “While we are still in this tent, we groan, being burdened—not that we would be unclothed, but that we would be further clothed, so that what is mortal may be swallowed up by life” (2 Cor. 5:4). Again in Romans 8, Paul exclaims, “We ourselves, who have the firstfruits of the Spirit, groan inwardly as we wait eagerly for adoption as sons, the redemption of our bodies” (Rom. 8:23).

In both of these texts, he uses the raw, visceral language of “groaning.” This term does not express slight desire but a longing that churns from the bowels of a person’s soul.

The term “groaning” appears often in Scripture and also carries significance during the Israelites’ time in Egypt. In Exodus, God’s people “groaned” to be delivered from slavery (Ex. 2:23–24; 6:5). They suffered in their state of servitude and longed for the better place that God had promised Abraham and their forefathers. They deeply desired the relief of release from slavery and the pleasure of the land of “milk and honey” (Ex. 3:8).

Anyone who has ever experienced profound loss is totally familiar with such sentiments. When you begin to comprehend how drastically life has been altered, there appears to be no hope, no reason for going on, no possibility that there ever again could be anything worth living for.

A person can see and experience the brokenness of this world and imagine the perfect glory of heaven. This tension increases in the season of your worst. The depth of the darkness of this world climaxes and your longing for relief—permanent relief—heightens.

From Outreach Magazine  7 Tensions in Seasons of Significant Change

For Paul, his tension was twofold. He loved Jesus and wanted to see him face-to-face. He craved the perfect joy and bliss of heaven.

At the same time, Paul also wanted relief from his suffering. He had undergone so much abuse, including unjust imprisonments, brutal beatings and excruciating lashes from whips. His fellow Jews hated him, while many Christians still feared him because of the persecution he had organized against the church. He was opposed and rejected by so many.

After opening 2 Corinthians by describing his deep pain and shedding light on some of the conflict in his relationship with the Corinthians, Paul wrote, “Therefore, having this ministry by the mercy of God, we do not lose heart” (4:1). The ministry that God had entrusted to Paul gave him hope. Amid the suffering and conflicts, a sense of ministry purpose enabled him to persevere hopefully.

In the next chapter, he further coalesced his frank longing for deliverance with his hopeful resolution to serve God while he waited for glory:

“So we are always of good courage. We know that while we are at home in the body we are away from the Lord, for we walk by faith, not by sight. Yes, we are of good courage, and we would rather be away from the body and at home with the Lord. So whether we are at home or away, we make it our aim to please him. For we must all appear before the judgment seat of Christ, so that each one may receive what is due for what he has done in the body, whether good or evil.” —2 Cor. 5:6–10

The desire to serve and please the Lord kept Paul hanging on. The thought of going before the judgment seat of God, where he would present a life of service as an offering to Christ, inspired him. Paul wanted to store up treasure in heaven.

Paul concisely summed up this same notion in Philippians 1:21: “To live is Christ and to die is gain.” To Paul, dying was preferable; it was a step into experiencing the fullness of union with Christ. He acknowledged that he was “hard pressed” between wanting to remain on earth versus ascending into heaven (Phil. 1:23).

The apostle concluded that staying on earth in order to love and serve Jesus constituted the better, ultimate option. He wrote that remaining in the flesh “means fruitful labor for me” (Phil. 1:22).

In other words, Paul says, “I want to be alive because I want to serve God and others.” Many bereaved believers would consider it a miracle to be able to say these words, given the sorrow of their circumstances. Paul’s clarity on God’s purpose for his life enabled him to endure with hope.

Excerpted from Therefore I Have Hope: 12 Truths That Comfort, Sustain, and Redeem in Tragedy by Cameron Cole, ©2018. Used by permission of Crossway, a publishing ministry of Good News Publishers, Wheaton, Il 60187, Crossway.org.