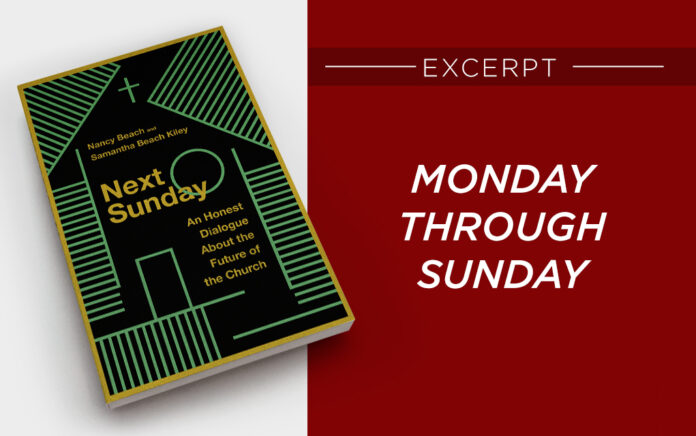 Two women—one a baby boomer and the other a millennial—discuss the issues facing the church.

The watching world wants to know if we are doing anything on the planet to care for the under-resourced, to fight for justice and equality, to feed those who are hungry, to visit the prisoner, and to lead the fight against systemic racism. Does the local church have an impact locally and globally?

My friend Mike Breaux tells the story of moving to Southern California, where his daughter is one of the pastors at a local church. Shortly after Mike arrived, he was eating in a restaurant, chatting with a waitress who asked him about his accent (Mike is from Kentucky) and what brought him to town. Mike said they wanted to live near his daughter and son-in-law, and then mentioned the church where they work. The next words from the waitress are what every one of us should long to hear about our community of faith. She said, “Oh, that’s the church that does so many good things to help people!” Oh yes, may that be so!

At Soul City Church in Chicago we rally around a firm belief that “church should be seven days a week, not just one!” I believe that every local church, no matter where it is located, should focus on meeting the very real and practical needs of the community around them.

This begins with listening to discern what those needs are, meeting with local city council members or someone in the mayor’s office, asking great questions, uncovering where the biggest hurts lie, and also learning about already-existing organizations that are doing good work and could use the support of a local church with both financial resources and volunteers.

In recent years I have been inspired by stories of local churches who have taken these steps and resist the tendency to be insulated in our holy huddles, only caring for the people inside our doors or people in far-away lands.

“What institution was intended to be a place where anyone could go to have their needs met?” My senior English class was stumped.

There was nowhere anyone could go to have all their needs met!

Mr. Sanders rarely offered answers, but it seemed we were never going to arrive at this possibility without assistance. “The local church,” he said.

We looked at him blankly. He suggested that at one time the local church was seen as a place where the hurting could be connected to resources in the community—whether they needed food, grief support, a bed, or legal aid. The church could serve as a central hub connecting those in need to ministries, partners, or contributions from those in excess (or whatever you call the opposite of “in need”).

The very idea—that in a healthy society the church might fill an essential role of need-meeting like no other institution could—was deeply compelling. So much so that it’s one of the only classroom moments I remember from all of high school. I never had much luck getting any of my friends in the Chicago theater scene to visit my church on a Sunday—not even on Easter or Christmas. But one weekend our church canceled services to go out and serve the city. I signed up to help sort clothes in a homeless shelter. When my group leader texted us that we could use a few more volunteers, I sent out a text early Sunday morning to eight friends—folks who had never been to or participated in Soul City Church before. Within an hour all eight showed up at the homeless shelter. It was the easiest invitation I ever made. And apparently— even for my friends who were skeptical about showing up at church—showing up to a homeless shelter was a very easy yes.

We are a socially conscious generation, passionate and eager to rally around efforts to combat injustice. Growing up with the internet has meant growing up exposed to inequality. This witness has formed us. We want to be part of restoration. I believe that if the church were to place a disproportionate emphasis on responsive and sustained service to the vulnerable, young people would flock to be a part of it.

What if this mission were front and center in our faith communities?

I think it would bring people like my friend Sarah Grace back to church. Though she was introduced to faith at a young age, like many of my friends, Sarah Grace has been on a journey away from the church, disillusioned by “unhumble” pastors, silence in the face of injustice, and exclusionary thinking. But she can’t quite get away from Jesus. And even while she stopped feeling at home in church as she knew it, her spirituality has deepened, and she now finds herself longing to be part of a community again. So, she’s been poking around websites.

“I just want to be a part of the church that’s doing the most good. If I saw a website with a mission statement that said, ‘We don’t claim to know everything, but what we are trying to do is make positive change for these groups of people who’ve been left behind, and here are all the places that we invest our resources of time and money,’ well, that’s where I would go.” At that point she stopped herself and asked an important question, “Although, I guess, why wouldn’t I just go join a volunteer organization? What’s the difference?”

As I write this, we are all cloistered in our “pods” due to Covid-19. I am wondering how to provide aid to those most affected by this disease. There are so many in need. I might have mission ADD.

But perhaps we have to tamper our love affair with mission “success stories.”

It’s harder work than I thought. But, oh, wouldn’t it be worth the discomfort, the difficult conversations, the rerouting, the undoing, the lament, and the patience if the church could become known as a place where needs are met? Such that a senior English class would immediately think of it and get on with their lesson.